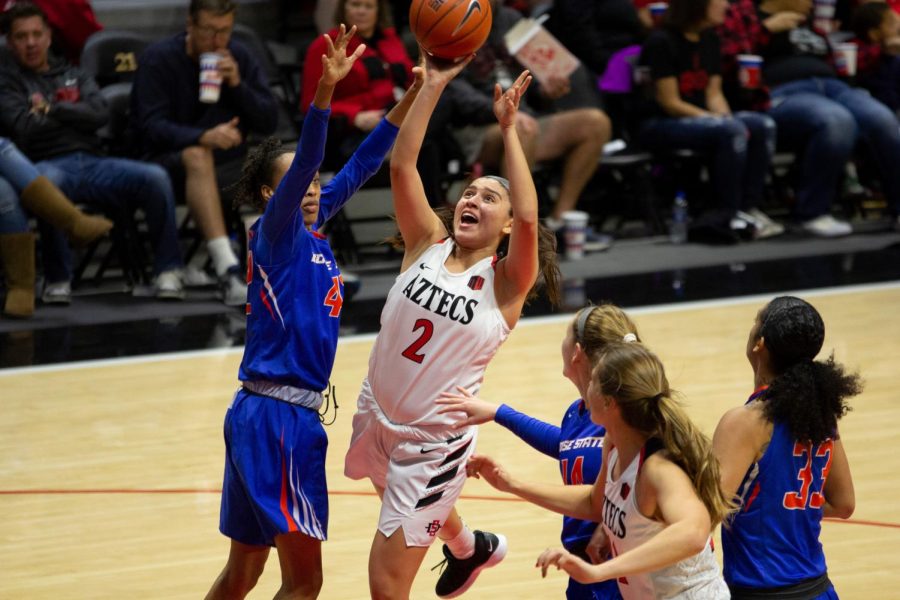 Then-freshman guard Sophia Ramos attempts a shot during the Aztecs 69-66 loss to Boise State on Jan. 5 at Viejas Arena.

There is something special and unique about the San Diego State women’s basketball team.

After examining non-conference play and a current 1-3 Mountain West Conference record, the conclusion is this team is special because of how talented they are at such a young age.

With the loss of many key players in last season’s senior class, head coach Stacie Terry was unsure what this season was going to bring early on.

“We’re extremely, extremely young,” she said before the season. “Right now, we don’t know what this team is going to be. So we’re just really focusing on being competitive and being disciplined in the action. We’re going to see where this year takes us.”

It was clear from the start.

Going back to the first game of the season, a 63-53 win at home over Biola University, the top three scoring leaders were underclassmen.

Sophomore guards Téa Adams and Najé Murray led the Aztecs with a combined 33 points, with freshman guard Mallory Adams contributing 12 of her own.

The three guards combined for 30 of the team’s 50 rebounds that game.

Freshman guard Sophia Ramos soon got into the loop and is now a major component to the team.

Ramos is averaging 14.6 points and 5 rebounds a game.

In conference play, the underclassmen have accounted for 189 of the Aztecs’ 243 points. That is 77 percent of an impact that the young athletes are making.

In sports, it is common to see teams with the upperclassmen as key players and leaders. Even with this exact same team last year, the seniors led and the freshmen were… freshmen.

However, times have changed and the term ‘freshmen’ doesn’t mean what it used to. The underclassmen have found themselves taking up leadership roles this season.

Not only are these young athletes contributing with numbers, they have shown a great amount of emotional support. Whether they are on the court or off, they are constantly coaching and encouraging their teammates.

Mallory Adams said she did not expect to be put in this position as a young player, but her team helps with the pressure.

“This has been a much bigger role than I ever imagined it would be so early,” Mallory Adams said after a 63-58 loss to UCSB in December, a game in which she led the Aztecs with 17 points. “But we’re with a really good group that understands that we’re stressed and fragile sometimes, and they just really keep us calm.”

Ramos agreed and said that the relationship she has with her team off the court transitions to the court.

“I think coming in our coaches kind of prepared us for what we were coming in for,” Ramos said in December. “But you can never prepare yourself until you’re actually here. We’ve been lucky enough to have some really good teammates who have really welcomed us in and allowed us to adjust to the college life off the court, which has made it that much easier on the court.”

The way the young athletes play together now is already impressive but will only improve in the future.

It is both scary and exciting to see how good this team is going to be in the next couple of years.