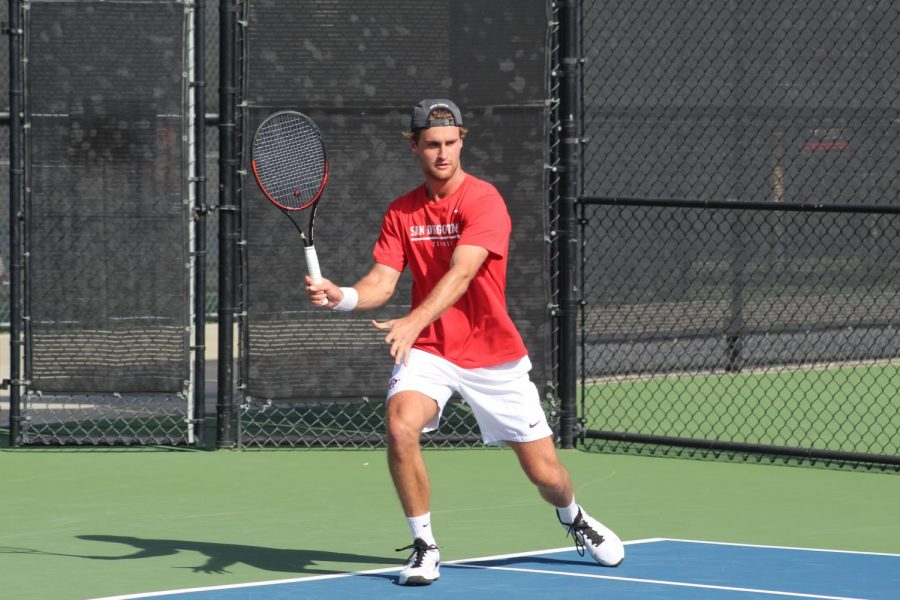 Senior Sander Gjoels-Anderson prepares to swing his racket during his singles match against Mateusz Smolicki. Gjoels-Anderson win helped the Aztecs defeated UC Irvine, 4-3, at the Aztec Tennis Center on Jan. 26.

On a beaming sunny Saturday afternoon, senior Sander Gjoels-Anderson picked up the first point for San Diego State men’s tennis, and from there the rest of the team rallied and secured a 4-3 victory for the first win of what could be a long and promising season.

Anderson and his doubles partner junior Rafael Almazan got out to a blazing start and were the lone pair to win a doubles game. The Aztecs would ultimately lose the doubles point, after the other two Aztec pairs lost 6-3.

With the Aztecs trailing 1-0, the team had to settle down and rally to start the singles matches.

Gjoels-Anderson proceed to win his singles match on court three in two sets, with scores of 6-4 and 7-5. The doubles and single victories for Anderson earned praise from head coach Gene Carswell, and put a smile on Anderson’s face for the rest of the day.

Carswell praised Gjoels-Anderson after the match.

“I think without a doubt we got some great senior leadership out of Sandor today,” Carswell said. “It’s great having a senior like that pull his weight.”

The praise appears to be well deserved, as last year Gjoels-Anderson was honored with a place on the All Mountain West Doubles team.

Kirchhoff and Hough won their games in two sets, on courts five and six. Notably, Kirchhoff won his first set 6-0.

On court two, Ignacio Martinez lost his match in three sets while Arnaud Restifo lost his match on court four in two sets. The score was won at 4-2, but then finalized at 4-3, and the Aztecs record improved to 1-1.

“It felt great,” Gjoels-Anderson said about the victory. “Our first win of the season, it was nice to get it going. We had a tough one last weekend so I think it was really important for us to get this win and get the season going.”

The come from behind victory comes after a 5-2 loss on Jan. 20 against UCSB, when the Aztecs were also behind early due to losing the doubles point.

Carswell said working on doubles is the main key moving forward for the year, but praised his team’s overall performance.

“Even without winning the doubles point today we found a way to get across the finish line. I’m proud of the group for that because it showed a lot of resilience,” he said.

SDSU will host UC San Diego next Sunday and will attempt to build off of their victory.

“For the next coming weeks it’s just about taking it one game at a time and hopefully, get some W’s,” Gjoels-Anderson said.