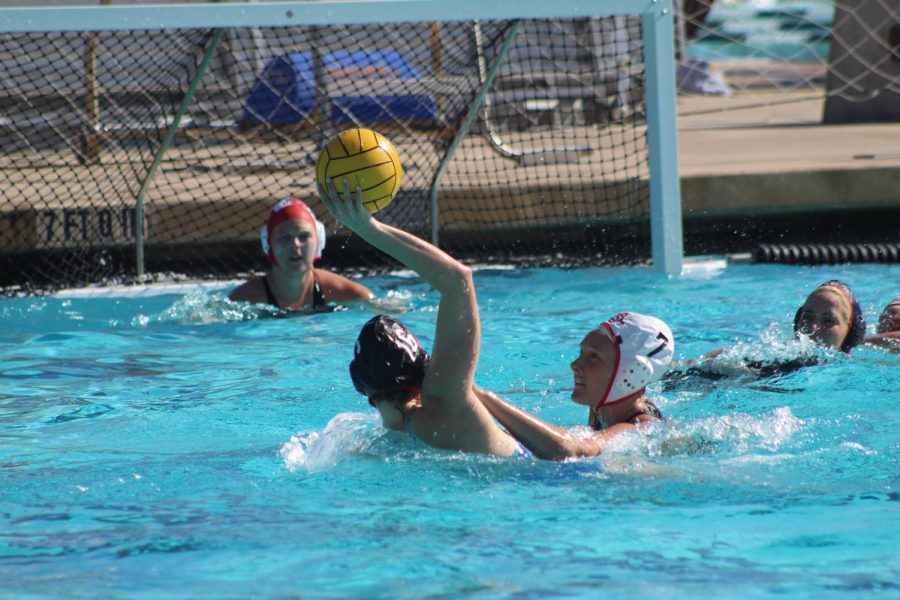 Senior goalkeeper Maura Cantoni guards the goal as a member of the SDSU alumni team attempts to score during the alumni's 12-9 victory at the Aztec Aquaplex on Jan. 26.

San Diego State water polo lost 12-9 to the alumni in the annual exhibition matchup between the two sides on Jan. 26. The game needed extra time because sophomore utility player Emily Bennett tied the game at nine apiece in the fourth period with 1:41 left.

The alumni appeared to miss playing at the Aztec Aquaplex, as they jumped out early, scoring the first three goals and six of the first seven.

“It (was) such a great day of reminiscing about all of our teams of the past and all of the challenges, struggles, successes, and growths that I’ve seen from our alumni is phenomenal,” head coach Carin Crawford said. “The fact that we ran out of cap numbers is just a phenomenal showing by our alumni, so I couldn’t be more happy.”

The Aztecs, who sport a record of 1-2 following their season-opening trip to Hawaii for the Rainbow Invitational, went on a 5-0 run that coincided with a 13 minute scoring drought for the alumni and tied the score at six going into the final quarter.

“We knew it was going to be fun and people would be goofing around, but we were still trying to take it seriously,” junior utility player Shelby Kraft said.

“We want to welcome our alumni back, we want to make sure they have a wonderful experience,” Crawford said.

A friendly rock, paper, scissors match decided who received the throw in to start the fourth quarter with the student athletes winning the ball. That was not the only fun that went on. The alumni argued a timeout call with 26 seconds left by Crawford and at the end of regulation, the alums wanted a shootout rather than two extra possessions of three minutes each.

“My assistant coach, Ioli Benekou, who graduated two years ago and is a member of the Greek National team, knows everything we do and knows all the strengths and tendencies of the current team,” Crawford said. “The banter back and forth had to do with ‘if you match up on me and try to steal the ball on you, I am going to kill you.’”

The alumni in attendance for the game had some awards and playoff experience under their belt.

“We have former All-Americans, four Harper Cup MVPs, and almost all of the starting lineup from the 2017 team that went to the Final Four of the NCAA tournament,” Crawford said. “To see them come back to campus and celebrate their experience and celebrate what it means to have been an Aztec Water Polo player, it’s very rewarding and gratifying for me.”

The Aztecs continue their season at UC San Diego for the Triton Invitational on Feb. 9-10.