Baseball welcomes alumni back for exhibition at Tony Gwynn Stadium 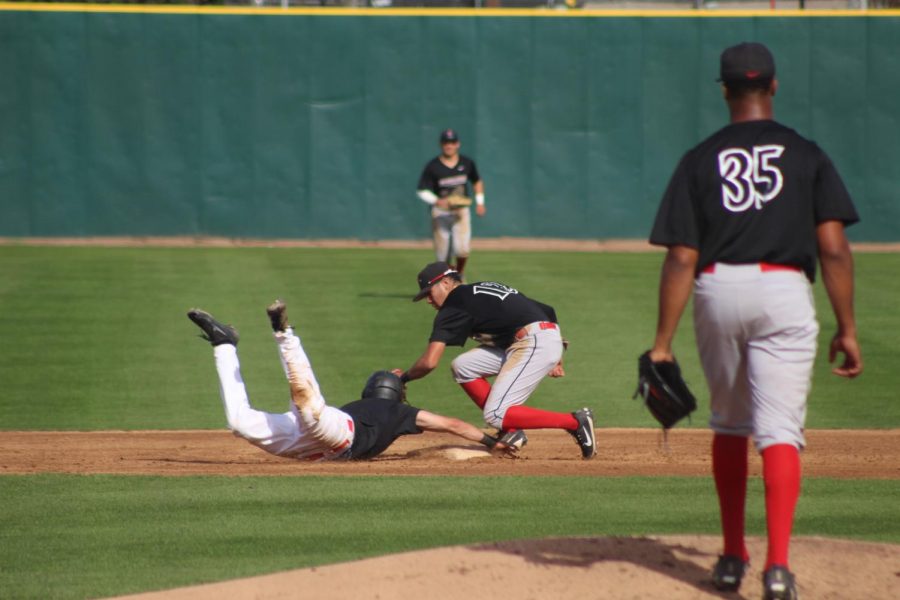 Freshman infielder David Alamillo tags out a member of the SDSU alumni while freshman right hander Aaron Eden looks on. The Aztecs defeated the alumni by a score of 8-2 on Jan. 26 at Tony Gwynn Stadium.

San Diego State baseball held a game against the alumni for the first time since 2009 on Saturday afternoon at Tony Gwynn Stadium.

The team has an annual golf tournament each fall, but a decision was made to bring back the alumni game after the idea was brought up at the last golf tournament.

“Our graduate assistants were walking around on the golf tournament and asking some of the other guys at the golf tournament ‘Hey, so you guys want to play?’,” head coach Mark Martinez said. “I guess it got it’s own steam, and now its going to become an annual activity we do every year.”

Fifth-year pitcher Harrison Pyatt started the game and said he enjoyed playing against some of his ex-teammates.

“It’s my fifth year here so it’s good to play against them,” he said. “I got to face six guys I already played with, and I got them all out fortunately.”

Pyatt pitched two innings and gave up no runs while the Aztecs out to an early lead.

“At times it was competitive, it was mostly just for fun,” Pyatt said. “As it went on it got a little more loose for everyone.”

The alumni fought back with a home run by former player Brandon Ruddy, whose teammates referred to him as “Bubba” and nowadays is a real estate agent out of Orange County.

Ruddy said he enjoyed being out on the field with some of his old teammates.

“It was a lot of fun,” he said. “Just swinging the sticks there in batting practice and everything. It was a great time.”

Martinez said the game was a fun way for the players to prepare for the regular season.

“This is more for fun, but at the same time there is development and there is also jobs to be earned,” he said. “We are evaluating that in each kid and there are some spots that are still up for grabs, so they know that and they got after it today.”

SDSU’s first official game will be held at Tony Gwynn Stadium against the San Francisco Dons on Feb. 15.