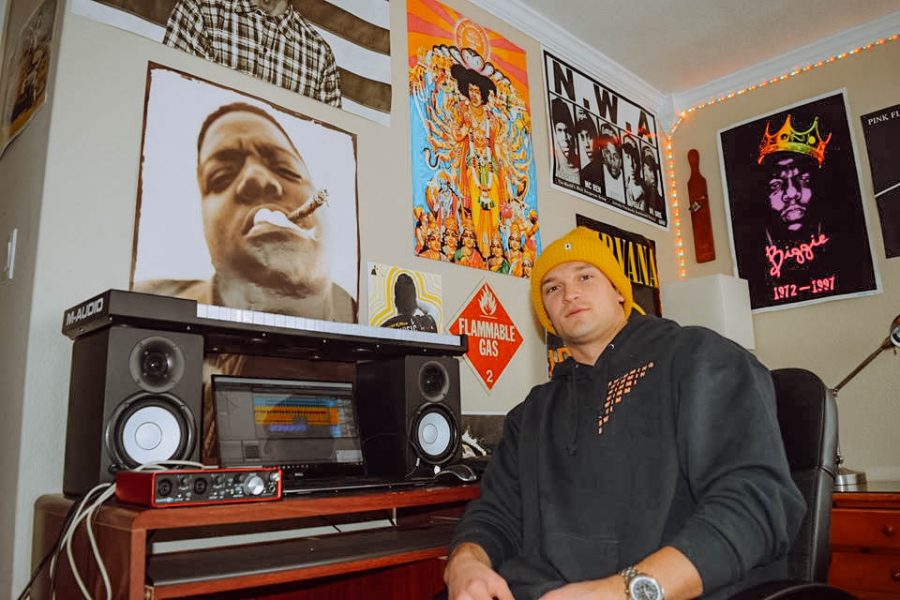 In 1996, punk rock band Dishwalla released its hit song “Counting Blue Cars,” which peaked at no. 15 on the Billboard Hot 100.

However, these Dishwalla alumni, George Pendergast and Rodney Cravens, didn’t see Morgan as a typical student, as he mastered the guitar and developed his singing talents before he was 13.

“They helped me get everything together, and eventually through that, pushed me to start singing,” Morgan said, “which made me really uncomfortable, and it was something I wanted to do but was scared to do. But I found that I actually have a decent voice, and from there, I was able to form the band that I made an EP with. We called ourselves Pernicious Nonsense.”

On his beloved electric guitar, Morgan and his high school band produced EPs, singles and covers to other songs. With the influence of bands like Rage Against the Machine, Deftones, and lessons from Dishwalla members, they created hard-hitting, ‘90s-inspired punk rock songs.

“He went from any other kid to being the front person of his own band writing his own songs,” Pendergast said. “Rodney (Cravens) was teaching him one day and he came to me at a certain point and was like, ‘I don’t know what else to show Morgan, it’s time for him to just go out and shred.’”

Instead of working usual jobs, Morgan would set his guitar case down in the busy parts of Santa Barbara and play for evenings on end.

Although Morgan had the abilities of a rock band frontman, he also covered the technical aspects of the music that allowed him to control the production.

“He’s wired a little differently than a lot of musicians because a lot of musicians are just pure passion, they’re not going to focus or have as much interest in theory or getting it right, or a lot of them aren’t very strategic or are planners,” Pendergast said. “He’s passionate about music and covered all the bases, to me that’s very different.”

Morgan continued to work and improve on his music until the end of high school, when he came to San Diego State and was forced to leave the band. In his first two years, a busy campus life primarily due to Greek life and rigorous academics put a halt on his passion for music.

“I was having a really good time, and I don’t regret anything but I didn’t focus on music at all,” Morgan said. “It was a break in music for me, and I wish that I had still been working on it because before coming to college, I would at least play for two hours a day, whereas it’s been harder to find the time recently. Being in the dorms, I felt like I didn’t have the creative space.”

Although Morgan still had people to jam with at times, music seemed more like part of the past.

One day in his late sophomore year, however, he rediscovered his music passion through an iPhone update.

“I was looking at my phone and I found the GarageBand app had been added with some new update, and I had never worked with any production software, so I was just screwing around and making music and I started to really like doing it,” Morgan said. “That was kind of a turning point in music to me.”

Since then, Morgan has been back to producing music, but in a different style. In recent years, hip-hop has also caught his attention, especially through the deeper lyrical aspects. Since his discovery of Garageband, Morgan has moved on to a music production software called Ableton, which is widely used by current hip-hop artists. He and a friend from Santa Barbara are currently working on his new tracks together.

“I try to incorporate as much live instrumentation into my beats as possible,” he said. “Even though I’ve been making hip-hop/rap a bit more, I really want to bring in my influences from ‘90s alternative. The fact that I play multiple instruments helps with the production, and the fact that my buddy is really on it for the lyrical stuff, I think the combination of the two would be huge.”

Although this change surprised the Dishwalla members, they still help mentor Morgan in his path to becoming a musician.

“I took off music when I was 19 to 21, because I thought I would’ve made it by then,” Pendergast said. “But that thing that makes you want to go for it, sitting in an office when you know you should be doing (music), sometimes that push is great. Sometimes years off are great because it gives you the fire to go like, ‘I’m not going back to that.’”

Morgan said he expects to finish his mechanical engineering degree next year, then hopes to live in Santa Barbara and keep working on music with friends there. His work is available on SoundCloud under the name “LOKIPRODUCTIONS,” where he will be releasing more music in the coming months.