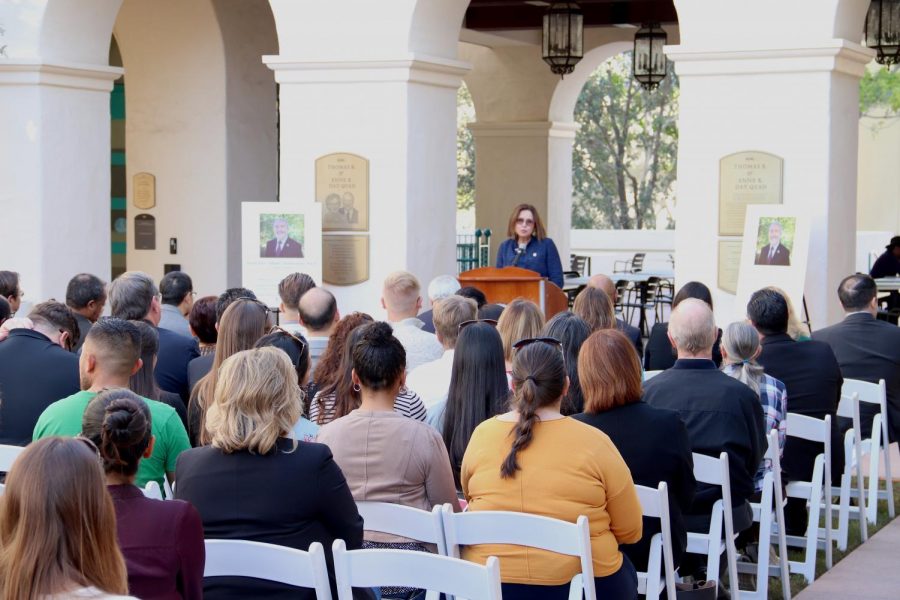 On Friday, Jan. 25, multiple San Diego State students, deans and professors gathered in the day quad of the Engineering and Interdisciplinary building to honor the late Morteza “Monte” Mehrabadi.

Mehradabi, who was the Dean of the College of Engineering, passed away last March. The university recognized the impact of his work by naming the Fab Lab after him. The naming was made possible by an anonymous donation, according to university officials.

The location of the gathering was no accident, as the quad is part of the building that is considered, by most, the “baby” of Mehrabadi, according to the Chair of the Electric Engineering department Chris Mi.

“Monte has been very instrumental to this building,” Mi said. “It is like his baby. He was involved in every aspect of it.”

According to mechanical engineering professor Samuel Kinde Kassagne, the Nano Fab Lab is an advanced area designed to fabricate small devices like components inside of phones. The efforts made by Mehrabadi, while Dean of the department, were vital in the creation of it.

“We did not have this (lab) and very few universities have this kind of facility,” Kassagne said. “In fact, very few ones also have 24-hour access. Monte fought for this. We are happy that he made this happen.”

This event is considered a singular recognition for a unique man that put his “heart and soul” in the Engineering department, according to his friend and mechanical engineering professor  Asfaw Beyene.

Interim Provost and Senior Vice President Joseph Johnson said the university made the decision to name the lab after the dean as a sign of respect for the hard work that Mehrabadi put in the program.

“Dean Mehrabadi was so dedicated to the College of Engineering and to San Diego State University,” Johnson said. “If you knew him, you could not help but appreciate his passion for the students and for this school. It is important to acknowledge and to celebrate his contributions.”

His passion was also admired by the students of the program, as some of them, such as mechanical engineering senior Nikolas Marquez, describe him as someone who truly cared about them.

“Sometimes, I would be walking on campus and see him, and he wouldn’t just say hi, but he would stop and talk to me and ask me about my classes,” Marquez said. “He genuinely cared. He was dedicated to making this college of engineering experience at SDSU the best that it could be. He was a soft-spoken man but very driven.”

Mehrabadi was named dean of the College of Engineering in 2014 and served in the position until his passing on March 13, 2018. Before being named Dean, he was the chair of the Mechanical Engineering Department since 2007, according to university officials.