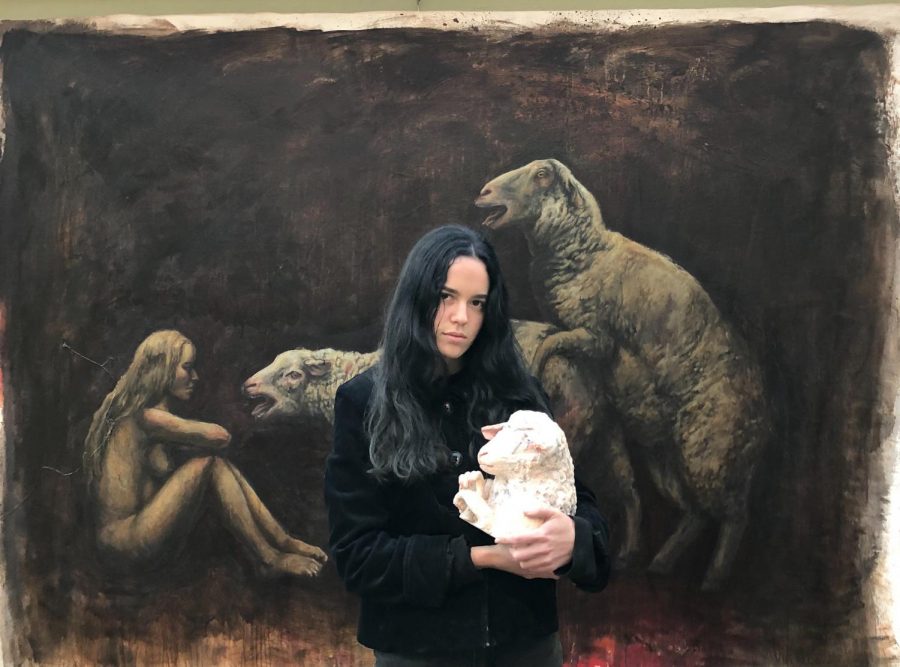 Studio arts junior Avia Ramm stands in front of her painting outside the South Art building, which was reported stolen on Jan. 23.

by Kaitlyn Little and David Santillan

Theft
On Jan. 22, around 1:55 p.m., an iPhone 10S was taken from a backpack during a basketball game at the Aztec Recreation Center.

On Jan. 23, studio arts junior Avia Ramm reported a stolen painted mural from the exterior of the South Art building. It’s suspected the painting was taken during winter break. Anyone with information should contact SDSUPD at (619) 594-4636.

Vandalism
Graffiti was reported on the side walls of the first floor men’s restroom in the Gateway Center on Campanile Drive around 11:50 a.m. on Jan. 17.

Suspicious Circumstances
Suspicious letters were sent to the athletics department at the Fowler Athletic Center around 6:45 a.m. on Jan 18.
A male subject was reported drinking alcohol at Trader Joe’s around 5:25 p.m. on Jan. 19. The non-SDSU student was cited for an open container of alcohol in public.

Access Control System Alarm
A non-SDSU student was arrested and taken to county jail for indecent exposure and violation of a stay-away order on Jan. 18 around 6:30 p.m. after a front desk alarm was set off in South Campus Plaza North.

Public Intoxication
On Jan. 19, around 7:05 p.m., a non-SDSU student was asked to leave Aztec Lanes by staff but refused and yelled at patrons while touching their food until the individual was arrested and taken to county jail for public intoxication.

Brandishing a Weapon
A non-SDSU student was arrested and taken to county jail for brandishing a replica firearm, tampering with a vehicle and obstructing a police officer along Zura Way at 7:45 p.m. on Jan. 19.

Vehicle Burglary
It was reported someone cut a hole into the top of a convertible in Parking 6 around noon on Jan. 21.

Vehicle Tampering
A tailgate was reportedly stolen from a vehicle in Parking 1 around 3 p.m. on Jan. 22.

Burglary
Around 8:40 p.m. on Jan. 22, an individual reportedly found a hole in the hood of their vehicle parked in Parking 7.