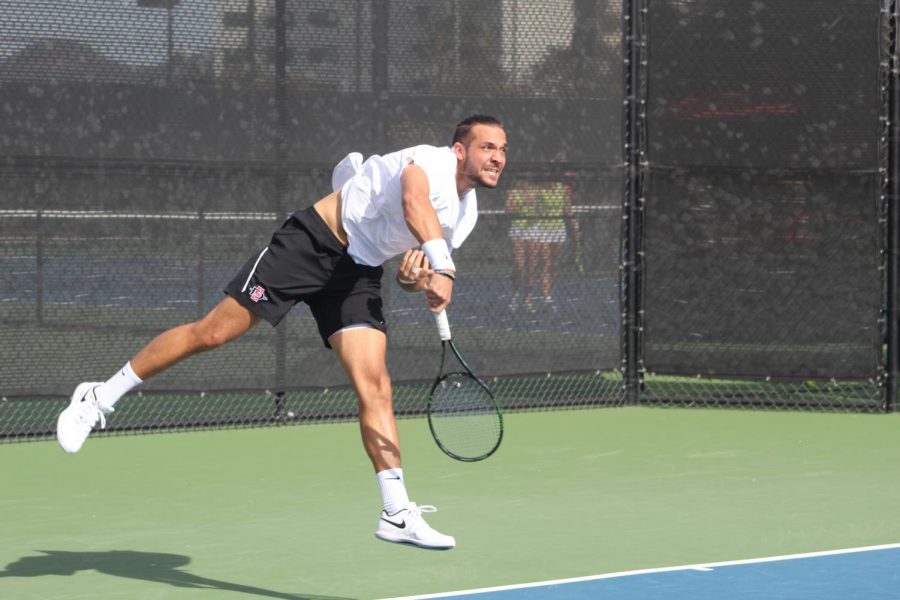 Junior Fabian Roensdorf completes a serve during the Aztecs 5-2 loss against UC Santa Barbara on Jan. 20 at the Aztec Tennis Center.

San Diego State men’s tennis defeated crosstown rivals UCSD by a score of 6-1 on a dark and gloomy Friday afternoon on Feb. 1 at the Aztec Tennis center.

The game was originally scheduled for last Sunday, but due to bad weather conditions, the game was moved to Friday.

“We adapted well,” head coach Gene Carswell said. “Credit to our guys, they didn’t use it as an excuse, they came out here, were ready to play and it led to us getting the victory.”

The Aztecs picked up the doubles point for the first time this season and started with a 1-0 advantage. Sophomores Jan Kirchhoff and Ignacio Martinez won their doubles match 6-4, which clinched the point.

As the singles matches started, the Aztecs appeared to have a fiery string of energy. On court three, senior captain Sander Gjoels-Andersen blazed by his opponent, winning both of his sets 6-1 just as the sky began to turn gloomy.

“I mean we’re not used to this kind of weather here,” Gjoels-Andersen said. “I think we handled it well, it doesn’t really matter for us.”

To seal the win at 4-0, Martinez won his match in two sets, and the Aztecs officially improved their team record to 2-1.

On court one, a highly skilled and exciting match was taking place. Junior Fabian Reinsdorf found himself down 1-5 in the first set. Reinsdorf tried his hardest to rally back, but he ended up losing the first set 6-3.

The next set was a different story. Reinsdorf rallied and fought hard to win 6-3 and had his eyes on the prize. In the third set, Reinsdorf found himself down 3-0 and really had to pull it out of his bag to rally back. Reinsdorf fought, and by the end of the set, he came out victorious by a score of 7-5.

This is the second singles match in a row where Reinsdorf has come back from losing the first set.

“In the third set, I got a bit tired, and I’m glad everything worked out in my way,” Reinsdorf said. “Pretty happy with my positive record.”

“To his credit, he kept after it out there and found some solutions,” Carswell said.

The Aztecs’ season record is now 2-1, and they will be preparing for a tough home matchup against Alabama next friday.

“Feels really good, got a good start now and I feel like the whole team is really motivated and ready for our next coming matches. We’re gonna have a tough weekend next weekend,” Gjoels-Andersen said.