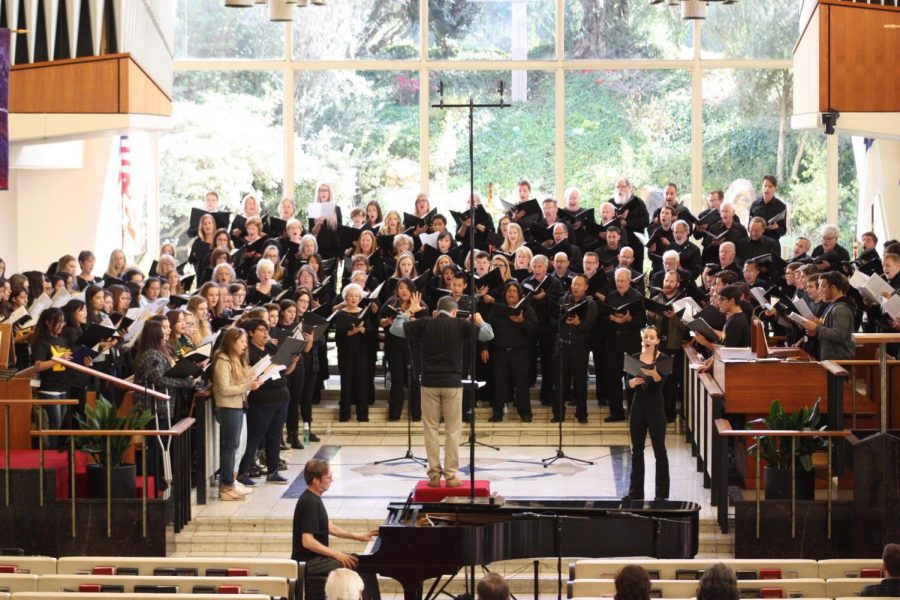 Singers from all different backgrounds and ages will be gathering to participate in providing music for the surrounding communities of San Diego.

On Feb. 23, high school youth from San Diego and Riverside Counties will come together for one day to sing in a culminating concert, under the direction of the San Diego Master Chorale (SDMC) Music Director John Russell, who has previously worked on different orchestra projects around San Diego.

This current concert will bring high school students and the SDMC together to experience a professional atmosphere of singing, while incorporating their own musical backgrounds into each piece.

John Russell, music director at SDMC, explains that this program is a way to show high school students that singing doesn’t have to end after high school, even if it isn’t their career.

“Many of them come in to have their eyes opened with this many people, at that level, to look into the future past their high school choir, regular, everyday experience, so that they see that even if their goal is to go into social work, the San Diego Master Chorale and other programs exist so that they can still keep performing arts in their life,” Russell said.

The concert involves a one day workshop, with a free concert performance that anyone can attend later that day. The workshop begins at 9 a.m., and it may range from 12 to 13 high schools represented, according to Russell. Each student has been picked by their music directors from each high school to be apart of the honor choir, and all of these students come together, having never sang with each other before.

SDMC joins these students for the day, and they bring in a couple pieces of music to work on that they will be singing later for the performance. By the end of it, nearly 200 people  will have been involved in the process.

No one is turned away. Russell said they leave it up to the high school directors to bring in the students they feel would do well in the ensemble, and benefit from it.

“Some look at it as an opportunity for their juniors to come to this one-day workshop,” Russell said. “They may get confidence building, and go back charged up for their senior year in their home chorus.”

Russell also said, “It’s particularly cool for the male voices to sing with the professional group,” as the male students realize this is what they’ll sound like once their voices have developed. For a lot of the high school students, singing with a professional group and with this many people is a first-time experience for them.

Teachers from previous programs also said they were motivated and inspired from being in that big of a group, for attending, as well as past honor choir students who were motivated by the involvement of the program.

“What we do in this room matters to our culture and the artistic ability of the human race,” Dylan Gebhardt, a past 2018 SDMC honor choir participant, said. “It is important to keep singing these songs because each is a story. Songs are an oral history and singing is a beautifully artful way to express stories and feelings and tragedy.”

Another previous honor participant mentioned the aspect of community.

“Often times, people get so stuck on what their individual choir is doing and it’s refreshing to be able to venture elsewhere and work with different singers, accompanists, and directors,” Kennedy Levinson, a Mt. Carmel High School student from the 2018 SDMC Honor Choir Festival, said. “Meeting new people and being able to connect through music is special. I love being able to refine my vocal technique and perform and practice with professional singers.”

At the Los Angeles Master Chorale, these 20 to 30 singers gather together in Disney Hall, and Grant Gershon, the conductor, stands on the stage and works with them.

“This is what kind of inspired the program, and I wasn’t aware of anything quite like that in San Diego,” Russell said. “There are other chorale festivals, but not a one-day program where it occurred on the same day. The Los Angeles Master Chorale, which I sang in for a couple of seasons, (was a way) that I got to see first-hand how they put together that program. (Eventually,) I would love to have a thousand high school voices.”

San Diego State also seeks to honor high school students through its Community Council for Music in the Schools program, which is aimed at supporting music education in public schools. It is a non-profit organization that is connected to SDSU’s School of Music and Dance. This program will also be honoring high school students involved in honor choirs from around San Diego at several free, public concerts in 2019.

The 2019 Honor Choir Festival put on by SDMC will be held on Feb. 23 at the First United Methodist Church in Mission Valley.

For Russell, it was the personalities—individuals—that caused him to get into music professionally.

“I was at a point in my high school life where I wasn’t sure what college was going to be, then I had some summer singing experiences, and that sort of turned the tables,” he said. “It took me a few more years before I came to realize this—there was some people I met that were doing this at a really high level, and I had to do that.”