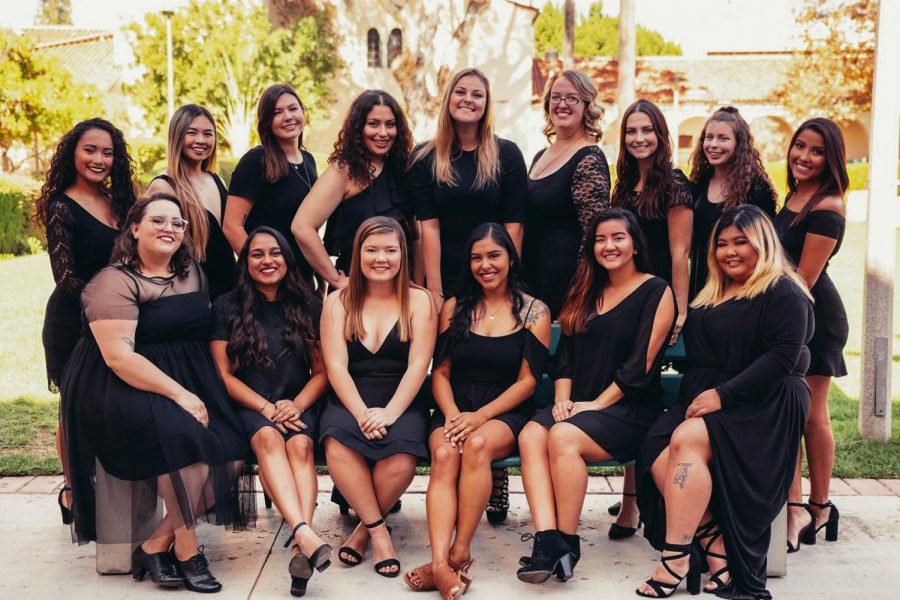 A cappella performers make up a subculture at San Diego State represented by three groups of students, which came together for a mixer at Hepner Hall on Jan. 30 at 8 p.m. Each group showcased its talents, teasing what’s to come for the rest of the semester.

Sirens of State is the only all-female group of a cappella singers on campus. It has 14 members who rehearse in the evenings and juggle work, school and other involvements along with the activities of being a Siren.

Since all majors are welcome to join the Sirens, rather than just music majors, a variety of studies are represented by the members.

While the genres and artists the Sirens choose from to perform range from classic rock to Broadway to Lorde, their songs generally focus on women.

Thus, the Sirens have created a welcoming environment for women within the a cappella community.

“It’s a relief from classes and work to come to a place where people care and support you,” LaRue said.

Originally, the group went by the name Vocal Vixens, but another women’s group with the same name reached out to ask the singers to change their name.

The Sirens have an upcoming event called the Spring Showcase in April. This performance will include all three a cappella groups with the Sirens of State hosting the event.

Preposterone is SDSU’s all-male a cappella group. It takes a different approach to its performances, focusing on different aspects of music and bringing energy to the stage.

Preposterone has performed songs across the musical spectrum, from Frank Sinatra’s “My Way” to “My Shiny Teeth and Me” of “Fairly Oddparents” fame.

“We emphasize singing what you want to sing, instead of perfecting it,” financial services junior  and Preposterone president Dustin Elliot said.  “It’s important to me to do what you love because it’s worth your time.”

The group’s goals this year center around preparing for shows. The members want to be able to host a show this year or next, and also want to start doing their own performances off campus.

Preposterone has 11 active members and is currently looking for more people. Auditions for the group are on Feb. 11 and 13 at 7 p.m. in the second floor of the music building.

There are no official requirements to join. According to Elliot, prior singing experience helps a lot, but the group will work with anyone who is willing to put in the time.

Soundwave is the campus’s co-ed a cappella group. It has 13 members total, with five of them being beat boxers.

Brad Bolton, a fifth-year environmental engineer and the president of the group, said the variety of the members allows the group to have a fuller sound. The members can sing in different octaves and have a wider range overall.

The music genres for the group mainly consist of pop and R&B, but it has branched out before.

On campus, Soundwave performs about once a week, attending different campus events and often singing in the Conrad Prebys Aztec Student Union.

Soundwave has experience performing off campus as well. The group used to perform at the Hillcrest farmers market until it was asked to leave due to the distraction it posed for business.

To join, the auditions are Feb. 11 and 13 at 8 p.m. in the music building. The only requirements to become a member are being an SDSU student and a singer or beatboxer who blends well with the group’s sound.

As for the overall acappella culture on campus, members of all three groups agreed that the subculture is a niche music community with very little coverage, and they want more people to get involved.

“What we have is great and we love everyone, but I wish it was better known,” Bolton said. “I want there to be more people and more groups.”

However, this doesn’t impact the passion or enjoyment the group members feel about being involved in the a cappella scene at SDSU.

“As soon as I walked into the audition, I had a whole room of friends,” Elliot said. “I found a place where I could hang out and jam with the boys.”