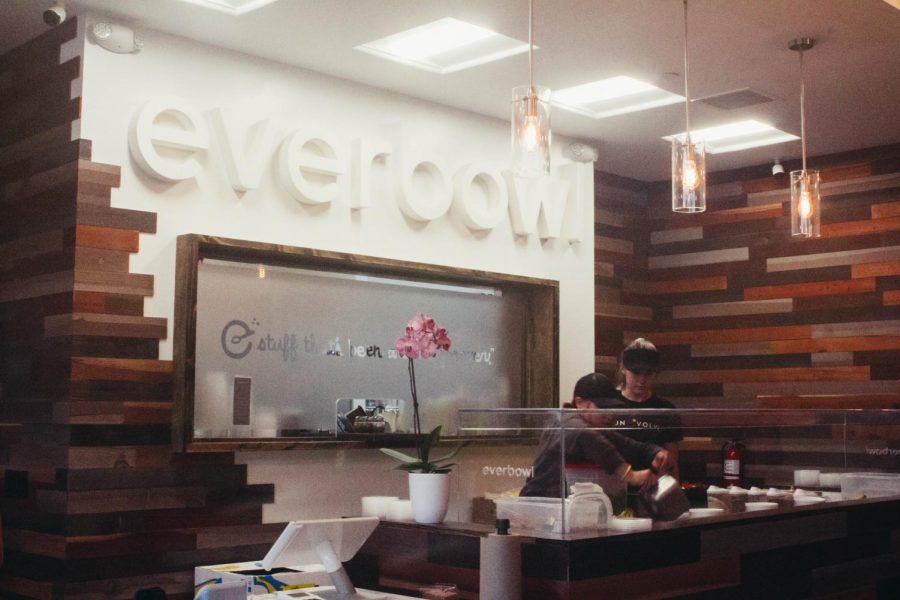 When Everbowl had its soft opening at the end of January, the line of students and community members wrapped around the building. The next day, the restaurant officially opened for business.

SDSU Dining Services director Paul Melchior said the desire among students on campus to lead health-conscious lives contributed to their decision to bring the chain on campus. He said students are able to use their meal plans at the new restaurant.

“We did a recent study, and the study results showed a smoothie-bowl mix genre,” Melchior said. “We were able to come to an agreement with Everbowl and they built it to their specifications.”

Melchior said contracts administrator Debbie Burchianti is in charge of all agreements dealing with operating franchises on campus, making sure the campus has a good mix of businesses that are in line with the university’s standards. After investigating Everbowl’s business plans and intentions, the lease was finalized and the restaurant was granted permission to begin the process of setting up their restaurant.

According to Everbowl’s main website, its mission is to “unevolve,” or to get rid of the unhealthy fast-food which has become part of most people’s lives. Instead, they seek to bring it  back the basics to just eating the “stuff that’s been around forever.” Its menu options include bowls, smoothies and salads, generally costing between $8 and $9.

Everbowl’s manager Jordan O’Dell said he left his job as the manager at a Burger King to work for Everbowl. So far, he said he’s been happy with his team in his new managerial position.

“The vibes are good, the music is good,” O’Dell said. “The food isn’t processed, and there’s no added sugar.”

Everbowl’s most notable food bowls are the predesignated local favorites, recommended by Everbowl, and the “whatever” bowl, which is designed by the customer. Ingredients include fresh fruits such as banana, kiwi, pineapple and goji berries.

All bowls start with an option of four base ingredients, topped with a liquid such as almond milk or coconut water. Customers then can choose from several different fruits to load into their bowl and then top it off with protein powder or seeds.

When asked how Everbowl stands out compared to other competitors, O’Dell said he is confident their business surpasses others around campus for several reasons, most notably being the quality of their food. He said he believes students will be more inclined to choose a nutritious snack over overly processed products and that the prices are manageable.

Everything made by Everbowl is vegan and vegetarian-friendly except the bee pollen, whey and honey options, which further attract many health-conscious customers.

“The main goal of Everbowl is to connect with people,” O’Dell said. “It’s a place where it’s healthy and where students can hang out.”