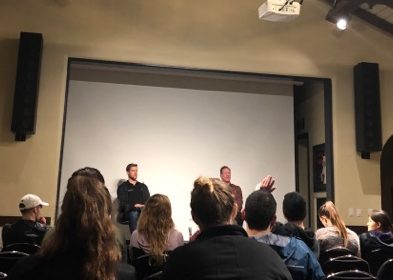 Volcom Co-Founder Thom McElroy lectured students on the key to entrepreneurship at a Feb. 13 event.

San Diego State’s Entrepreneur Society hosted Volcom Co-founder Thom McElroy at a forum on Feb. 13 to give students an opportunity to learn from his experiences within his prominent entrepreneurial background.

McElroy, an SDSU alumnus, shared stories of his beginnings in graphic design as well as the process of founding McElroy Designs and eventually co-founding the sports clothing brand Volcom.

McElroy said his post-college career in graphic design began with Vision Streetwear where he designed t-shirts and other products, learning a great deal through creativity.

“I learned to be super creative, to be better than my competition and get a name for myself,” McElroy said.

McElroy said doing long hours freelancing and working at Vision Streetwear gave him experience and allowed him to enter a partnership startup company that would later work with clients such as Macy’s and Nordstrom. In time, he launched McElroy Designs where surf companies such as Quiksilver and Vans were among his top clients.

McElroy expressed his interest in entrepreneurship as feeling a big rush from taking risks.

“You have the freedom to win or lose by yourself, live or die by your own sword,” McElroy said.

McElroy also said while continuing to work in McElroy Designs, he joined a business venture to form a surf and snowboard clothing line that later became known as Volcom. He designed the official logo for the company and continued to design products until retirement. Currently, he said he continues to design logos and is considering the development of a straw company.

Business administration freshman Griffin Morris said he was interested in attending the event due to the benefits of learning from someone with so much experience in his field.

“It’s interesting to hear from someone who succeeded in these many areas and be able to learn from his skills,” Morris said.

Students were able to ask questions and get advice on potential business ideas of their own. McElroy said he encouraged students to reach out and go after some of the many campus resources.

“Be passionate about what you’re starting,” McElroy said. “If you have no passion it will lead to failure.”

Marketing sophomore Kyle Joyce said getting a peek into entrepreneurship from somebody who has been so successful drew him to the event.

“It shows real-world examples of what’s going on and in starting a business,” Joyce said.