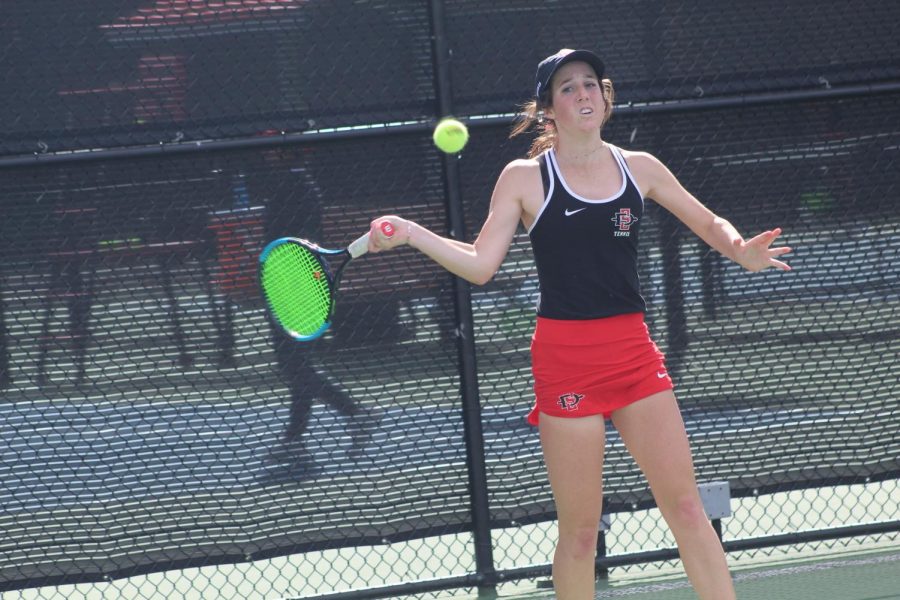 Sophomore Abbie Mulbarger competes during the Aztecs 5-2 loss against Arizona State on Feb. 16 at the Aztec Tennis Center.

After dropping a Saturday affair against California, 7-0, the Aztecs returned to the courts to face Arizona State University on a frigid, windy Sunday, falling 5-2.

“We’ve had to form doubles teams on the fly. We are playing people out of position.  It’s a game changer,” he said.

Junior Mia Smith, who had missed the previous three matches due to injury, drew back in to singles actions against ASU’s Lauryn John-Baptiste.  However, this was probably not the type of return the veteran had imagined as she was defeated in straight sets 6-1, 6-1.

As the match moved along, the play of Alicia Melosch seemed to be the highlight of the day for the Aztecs.  The freshman from Germany, who the team added in January, continued to show she belongs in the lineup.

“She is a very skilled young lady.  That big left handed game that she’s got and she’s a wonderful teammate too,” Mattera said. “She’s playing really well in both doubles and singles.  Everytime we put her on the court we know what we are going to get.”

Melosch squared off against Savannah Slaysman in the No. 4 seed.  The freshman made opposing Sun Devil work hard, as she controlled the flow and direction of the match.  Melosch won her seed in a convincing fashion as she knocked off Slaysman 6-3, 6-2.

“I [put] a lot of pressure on her, so my opponent had to beat me in an active way,” Melosch said.   “She played in a more passive way, so I think it was my active play [that helped]. I stayed focused the whole time.”

SDSU eventually gained one more point from Augustina Rimoldi.  The freshman was named the victor after her opponent, Sasa Klanecek, retired in the third set.

Mattera said it is important for the team to heal and rest before their next matches.

“We are going to spend most of our practice time tomorrow making sure everybody is getting their medical treatments,” Mattera said.  “At this point, tennis wise, we’ve got what we’ve got and what we got is very good. We just need health.”

The Aztec now have a record of 5-3 on the season.  They have a quick turnaround, as the play Hawaii at home on Feb. 18. Following that match, SDSU will travel to the University of San Diego to take on the Toreros on Feb. 23.