Student-penned musical ‘To Be Alive’ hits the stage 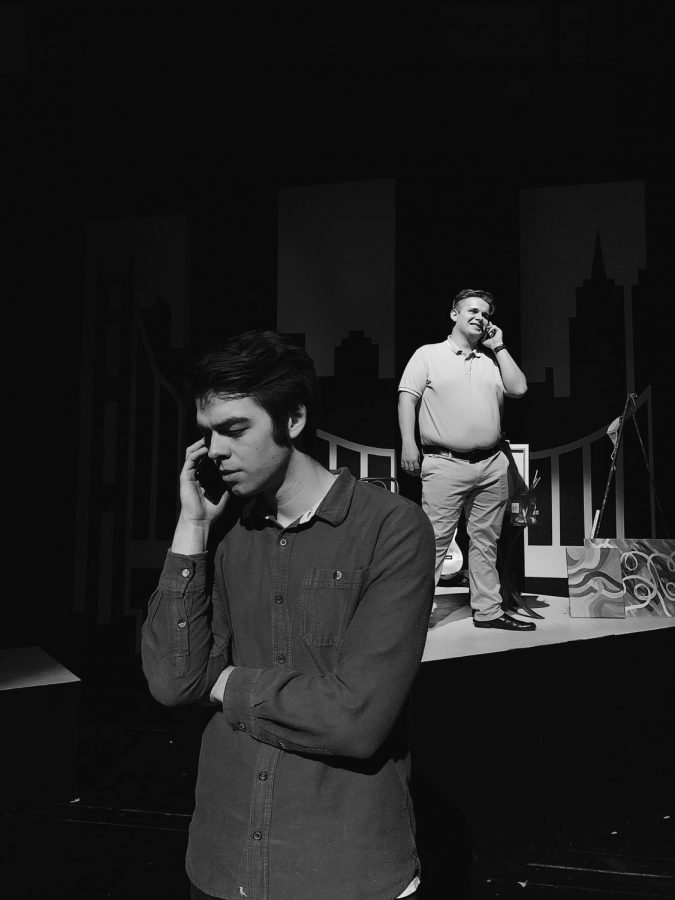 Ben (Marcus Rutledge) listens to voicemails from his father Doug (Noah Leach) in “To Be Alive.”

The new musical “To Be Alive” made its debut at the Don Powell Theatre at San Diego State on Feb. 15.

“To Be Alive” takes place in San Francisco and is told from the perspective of a 20-year-old who dropped out of college and is searching for his life purpose and place in society. The musical addresses the amount of pressure placed on young people to know what exactly they want to do in life and be successful quickly.

The books, music and lyrics for the production were by theatre arts sophomore Josh Concepcion, and it was directed by theatre performance junior Ross Graham. It was put on and sponsored by the Skull and Dagger Dramatic Society.

“I started gaining inspiration for this show when I was a junior in high school reading a study about the higher levels of stress measured in students attending university,” Concepcion said. “I looked around at my friends and realized it checked out. It seemed as if they were grasping onto this anxiousness about college, job concerns, their families and relationships. I wanted to write a script that dealt with these issues of social anxiety, fear of the unknown, the spontaneity of life and accepting the world for what it is instead of what it should be.”

Graham said the Skull and Dagger Dramatic Society seeks to provide theatre students a space to be creative and develop as performers.

“We work hard to make sure that all of our students can have extra opportunities to perform in as professional of a manner as possible,” he said. “It was great to see everyone involved in the production grow as individuals.”

“I connected a lot with Ben upon my first reading of the script,” he said. “The topic of legacy is brought up in the show and Ben searches for his purpose, and whether or not he will succeed in his pursuit of being a writer. As someone pursuing a career in the creative arts, I also wrestle with my doubts about my future and whether or not it’s worthwhile.”

John Michel, a theatre performance junior, played the character of Dylan Collins, who is Ben’s best friend. He felt he could also see himself in the character.

“When I first read the script, I pointed out how much I felt like the same person as my character,” he said. “Dylan was always trying to move toward his future and trying to move forward. He is really someone who always enjoyed a good time, his friends and the little slices of life.”

“To Be Alive” contained some heavy themes and several moments that left the audience in tears. The character of Ben in particular endures many hardships: he suffers a head injury from a car accident, he has a strained relationship with his alcoholic father, his high school sweetheart cheated on him in their house and the woman he falls in love with dies of a heart complication shortly after their relationship began.

“Heavy content can sometimes be the easiest and most fun content to play on stage if you allow yourself to safely jump into the emotion,” Rutledge said. “People want catharsis when they go to the theatre.”

Theatre performance sophomore Noah Leach said his role as Ben’s father, Doug, led him to see the complexities of a flawed character.

“When I was (cast) as Doug I was scared because I had never played someone who had so much baggage,” Leach said. “I thought about how a parent who spent a majority of their child’s life in a haze would feel if they finally woke up and came to. What I loved about Doug was that he wasn’t just a villain. He had an incredible story arc because he had that want to fix his relationship with his son.”

While “To Be Alive” had some highly emotional scenes, it also had some light, comedic moments. One of the show’s highlights was when Michel had to perform a very provocative song to his breakfast cinnamon roll.

“My character finally just let loose and didn’t care anymore about what anyone thought,” Michel said of the scene. “However, the song really had me asking if I wanted to invite my mother to see it.”

Theatre performance sophomore Shelby Beltran, who played Olivia, said it was exciting to watch the original musical come to life.

“My favorite part of the whole process was building brand new characters that had never been put on stage before,” she said. “Since the musical is brand new, I got to build and create my character, Olivia, into my own vision. I was able to take some creative risk and bring someone to life from paper.”

Beltran also said she hopes the audience left “To Be Alive” reflecting on its many teachable moments.

“‘To Be Alive’ hits home for a lot of people,” she said. “I hope the audience could connect with at least one character’s story and realize they’re not alone in their endeavors.”

Lexi Vierra, a theatre performance sophomore, is on the Skull and Dagger Dramatic Society Board as secretary. She said the process of building the musical from its inception was a memorable one.

“I am incredibly proud of everyone involved with ‘To Be Alive,’” Vierra said. “As someone who worked more behind the scenes, I truly got to see and appreciate everyone’s role throughout the process. This is the first time Skull and Dagger has ever done something to this scale and I am honored to have been a part of it.”

Skull and Dagger Dramatic Society will be presenting “Spring Awakening: A Children’s Tragedy” April 12, 13 and 14 in the Experimental Theatre at SDSU.