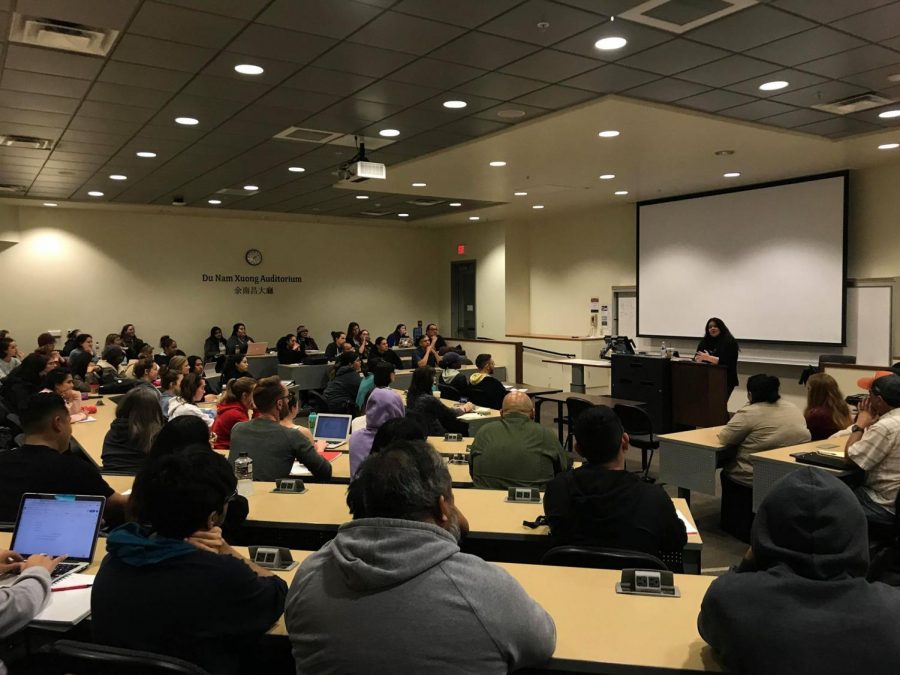 When asked to explain the concept of decolonization, Humboldt State University American Indian Studies Department Chair Cutcha Risling Baldy used an analogy to demonstrate the frustrations Native Americans have been facing as a result of being colonized.

“Let’s say you have a computer, and your roommate’s friend shows up and steals your computer from you,” Baldy said. “And then periodically comes back to your house to use it in front of you.”

Baldy, who spoke at a Feb. 20 lecture at San Diego State, said the idea of decolonization is important since lands which were colonized are not inherently owned by colonizers. Rather, they were owned by the Native people who have occupied and used these spaces for centuries before colonizers arrived.

“So, now your (roommate’s) friend comes up to you and says, ‘Listen I get that this is your computer, but I’ve been using it for a while and I put a lot of files in it and I put stickers all over the back so I feel attached to this computer and now you want it back?’,” Baldy said. “That doesn’t seem fair.”

SDSU’s mascot, which has been a highly debated hot topic on campus was also briefly addressed at the event. Baldy said she stood with the controversial belief that the Aztec mascot and moniker are inherently racist and should be removed.

“We have done scientific studies. We have done outreach to communities. We have shown where there were actual impacts on Native youth and the way that it’s tied to self-esteem and ability to perform in schools,” Baldy said. “And, if I have to hear all the time people say, ‘It’s just a mascot’ I’m like, ‘Ditto, man!’ Get rid of it! It’s just a mascot.”

“Smaller governments will be in charge of larger places where we can actually pass laws that actually protect these spaces from things like fracking, mining and over-harvesting,” Baldy said.

In addressing the concept of taking back stolen Native American land, Baldy said she promoted a call to action, asking the public to utilize radical imagination to help solve such issues.

“Radical imagination asks people to imagine beyond ‘its not my fault’ to ‘what can I do’,” Baldy said.

Baldy stressed the importance of participation among the community to spread awareness of the troubles Native Americans have been dealing with. She also advised people who support the idea of decolonization to donate to Native organizations that are doing their part in promoting it.

Some students who attended said they left the lecture hall feeling more open-minded and informed on the perils and struggles of indigenous people.

Liberal studies sophomore Karis Bailey said she initially attended the event for an extra credit opportunity in one of her classes but found the event illuminating.

“It was part of an extra credit opportunity but I feel like it’s pretty eye-opening,” Bailey said. “I feel like I’m walking out of this a lot more educated on what I can do as a student here.”

Liberal studies freshman Hanna Zaitz said the event was informative and allowed her to become more aware of what occurs on campus.

“I feel like I learned a lot and I was able to have a new experience on what’s happening,” Zatiz said. “It was really nice to hear on something I wasn’t aware of.”