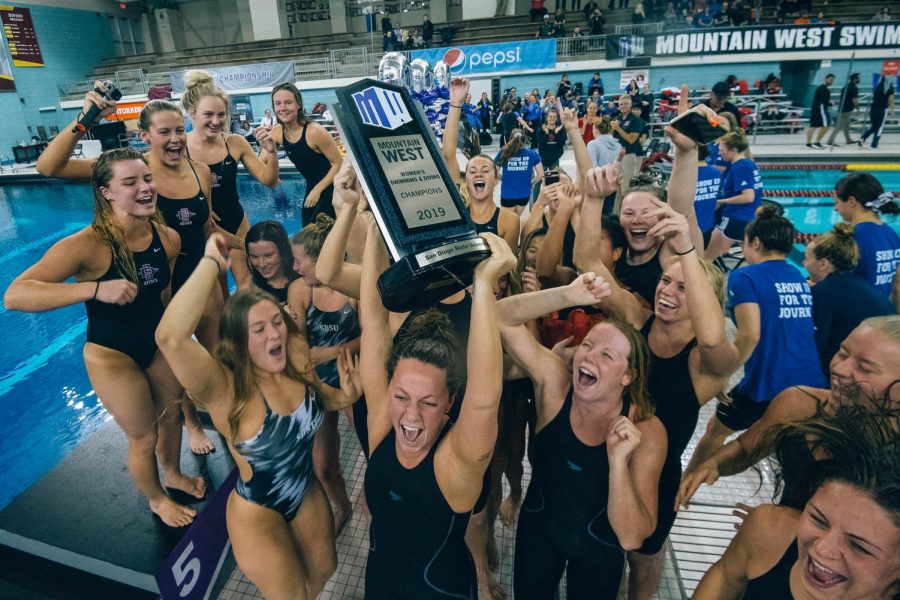 The Aztecs hoist up the Mountain West Championship trophy on Feb. 23 at the Jean K. Freeman Aquatic Center in Minneapolis.

“I want to thank the good Lord for allowing me to coach this team,” head coach Mike Shrader said. “He has blessed me with so many great young ladies to work with, and it has truly been an honor.”

It was the team’s first MWC championship since 2015.

One player that stood out was freshman diver Ximena Gonzalez, who was named Mountain West Diver of the Meet, marking the first time a freshman has ever won the honor.

Shrader said he was proud of Gonzalez’s performance throughout the season.

“Gonzalez has been really steady and has done an awesome job, especially as a freshman,” Shrader said. “Her and (diving coach) Roland (McDonald) have really worked well together, and she is very easy to coach. She is really tough and was a big, pleasant surprise for us this weekend.”

Gonzalez scored a 325.55 on Wednesday, the first day of the meet, which broke the previous school record of 325.20 set by then-senior diver Alexandra Caplan last season.

Gonzalez also became the first Aztec diver to win a MW Championship since 2012.

The championship win puts the Aztecs in a tie at four with Boise State for the most conference titles among active Mountain West members.

“We got to compete against (Boise State) earlier this year in a dual meet and that was an extremely close meet, where it came down to the last relay, so our kids knew we needed to be at our absolute best last weekend,” Shrader said.

Shrader said the team wants to win, as shown by going undefeated in dual meets this year, but also focused on having the championship mindset outside of the pool.

“To do that, we’re going to have to work hard on a daily basis, push each other, have a championship lifestyle outside of the pool,” Shrader said. “They bought in and understood it was going to be a lot of hard work, and they put the work in necessary to swim really well.”

“It’s double points, so it’s heightened importance in the meet,” Shrader said. “The medley relays were off the charts, setting MW records and school records in both 200 (meters) and 400 (meters) medley and was a big turning point in the meet and gave our kids a lot of confidence.”

Up next, junior swimmers Morganne Mckennan and Courtney Vincent as well as sophomore swimmer Klara Thormalm will head out to Austin, Texas for the NCAA Championships on March 20-23,

Shrader said the goal will be to stay focused while also balancing fun.

“(Vincent, Mckennan and Thormalm) don’t just want to be a part of the meet, but they want to go and do something,” Shrader said. “We want to try to swim better once we get down to Austin and just have some more fun but stay focused.