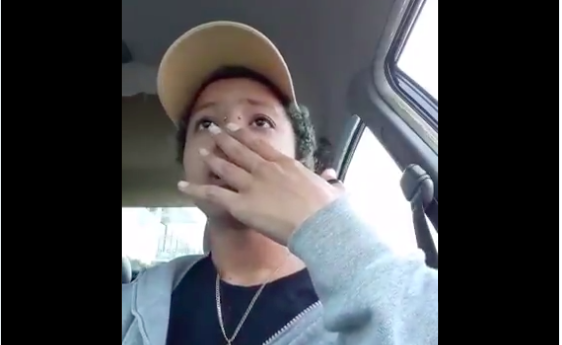 Rillo Moons reacts to the sound of a racial slur being shouted at the Black Resource Center on campus in a video posted to their Twitter.

This story was updated on March 6, 2019 to include information about the campus healing circles held after the video went viral.

A viral video originating from San Diego State’s campus displays a situation where a racial slur is shouted at a black student, resulting in online pushback and a campus-wide email from President Adela de la Torre.

The video was posted to Twitter on Saturday, March 2, by Rillo Moons. Moons can be seen sitting in a car when a group of people drive past off-camera laughing and shouting an unprintable, offensive slur sometimes known as “the n-word.” Moons, who is black, believes the comment was directed at the Black Resource Center building they were parked outside of. The vehicle reportedly consisted of multiple men of different racial and ethnic backgrounds.

“@SDSU these your students,” Moons tweeted. “How are you going to address this to prevent this in the future? Because this feels like an unsafe learning environment.”

The campus-wide email, sent around 5 p.m. on March 4, condemned the incident and announced the university would be arranging healing circles for affected students. The email was signed by de la Torre, Interim Vice President or Student Affairs Christy Samarkos and Chief Diversity Officer and Associate Vice President for Faculty Diversity and Inclusion J. Luke Wood.

“We stand behind the belief that diversity and inclusion benefits everyone,” the email said. “A diverse and inclusive culture helps our students to be better prepared for succeeding in a global community and workforce that is highly diverse. With that, we refute acts of marginalization, racism and hatred; we must all respectfully come together and support one another regardless of our backgrounds.”

Business senior and Vice President of Financial Affairs Christian Onwuka said in a tweet that black students at SDSU need to be proud of their black heritage and stand up to racists and racist incidents.

“To everybody questioning why the (Black Resource Center) is important and why it was necessary … cuz opposition is everywhere,” Onwuka tweeted. “To the new generation of Black students at SDSU … step up. Recognize our reality. Use your voice, rep your community. Be proud in who you are, and what you are.”

In discussing her reaction to the video, health communications senior Chidera Ezeani said she was shocked to know “this kind of thing” was happening in her own backyard.

“It was just confusing and disgusting because it’s the kind of stuff I see viral on Twitter all the time,” Ezeani said.

She also said she was disheartened the video did not show the people who shouted the racial slur as there is no way to hold them accountable for their actions.

Following the incident, students and faculty gathered in a healing circle on March 5, to discuss the incident and express their concerns and frustrations.

Associate Vice President for Faculty Diversity Inclusion and Chief Diversity Officer Luke Wood attended the healing circle and acknowledge the need for change in the university.

“We’re having multiple circles for these discussions, but beyond that there’s a lot of things that we’re going to have to do as an institution,” Wood said. “Some of those things we’ve already begun, such as (having) the provost professors who are doing training with other faculty.”

However, Wood acknowledged these kinds of things only address part of the problem, adding that there’s more work to be done.

Political science sophomore and A.S. Vice President of External Relations Michael Wiafe said, when it comes to issues like this, it’s all about power in numbers.

“Something that I took away from this … was that not one person can solve this,” Wiafe said. “You’re going to need everybody.”

Students interested in attending a healing circle following the video incident can contact the Black Resource Center at HarambeeScholars@sdsu.edu. Anybody with information on the incident was asked to contact university police by calling (619) 594-1991 or emailing PoliceInvestigations@sdsu.edu.

A previous version of this story incorrectly identified Moons as an SDSU student. The Daily Aztec regrets this error.