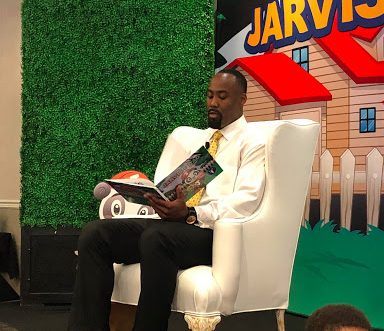 Jashon Sykes, a former NFL linebacker who played on the Denver Broncos from 2003 to 2004 and current Assistant Athletic Director of Football Operations at San Diego State, recently took on a new challenge

The father of three children — two girls and one boy — Sykes was prompted to become an author to tell inspirational stories to young kids.

He launched his first children’s book, “Multitask with Jarvis & Dad,” on Sunday, Feb. 24.

Whether it’s being a football player, father or author, Sykes said he has always wanted to be the best.

“I’m never content, he said. “People always say I’m one of the most competitive people they know. It’s just my personality, like I always want to continue improving on something. I have a saying, it’s either first class or no class. That’s kind of who I am — crème de la crème, the best of the best.”

He said fatherhood inspired him to pass on lessons to younger generations.

“I feel like, as an adult, it’s my role,” Sykes said. “I was always taught it takes a village to raise kids. That’s the time where kids are forming their identity. I wanted to have a positive effect on that.”

Sykes grew up Gardena, California, in the central Los Angeles area, and said he understood the positive impact kids needed, especially those who grew up in underprivileged communities.

Sykes aid he grew up without a father, just like many of his contemporaries in his neighborhood, and thus makes sure he maintains a positive presence in his own children’s lives.

Sykes’ three children, Joslyn, Autumn and Semion, were the inspiration in curating the plot of his book. They would sound off their feelings on the story, and Sykes would constantly have an open ear to all of his kids’ ideas.

“It’s easy when you can bounce things off of them, ask them their thoughts, opinions on things because they’re the ones living it,” he said. “They’re the ones at the age I’m trying to reach and attract. (My kids) are where it really started from when they were younger, reading books to them and knowing how important it is to instill good morals in your kids.”

As a young boy, Sykes was already exposed to a lot of reading and writing from his family.

His older sister, with whom he has a 15-year age gap, would read to Sykes and keep a diary of stories she wrote.

His mother, Reney Sykes, knew what influence Sykes’ sister had on him as a writer despite coming from a primarily athletic background growing up.

“With the big sister writing and reading stories, he would just do that — it became natural,” Reney Sykes said. “It embedded at the time in his mind that this is what he want to do, he wanted to continue to read books, (write) books and so it doesn’t surprise me.”

Despite giving up the shoulder pads and helmet 15 years ago, the lessons Sykes learned from the hard-hitting sport still apply to his life right now.

He said football helped prepare him for parenthood.

“Everything I’ve learned in the principles in football — as far as being accountable, a team player, being competitive, being driven — I instill all of that stuff in my kids,” he said.

Sykes said he wants to be the parent who is easily approachable. He wants to be able to play with his kids and have a good relationship with him.

At the same time, he wants to be the disciplinarian who makes sure his kids are on the right path, while still being fair.

“I’ve heard horrible stories where parents, once a kid hits a certain age, they don’t talk to their kids anymore,” Sykes said. “I don’t want that. I’m always going to have a good rapport with my kids.”

As director of football operations at SDSU, Sykes has also built a bond with student-athletes.

Being a former student-athlete himself, Sykes can relate to what the players are going through while also keeping a young, jovial personality.

“Individually, we can relate to Jashon a lot, so we talk to him and just have side conversations about football and even non-football,” said junior running back Juwan Washington while attending Sykes’ book launch party. “That’s why we’re here now, because we formed a relationship with him since we’ve been here.”