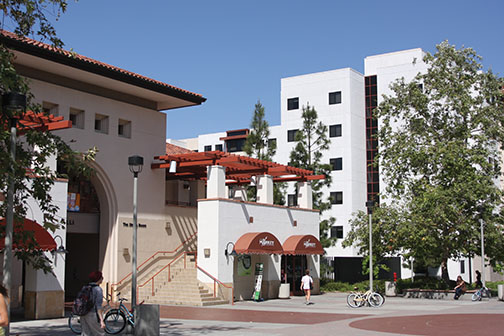 Some of San Diego State’s local sophomores might be out of luck if they’re seeking to live on campus next year simply because there might not be enough space for them.

According to the Office of Admissions website, students who graduated from a high school south of state Route 56 in San Diego County or in Imperial County are considered local. These students do not qualify for second-year housing without filling out an interest form – which does not guarantee housing.

Director of Housing Administration Cynthia Cervantes said students outside of the local service area are required to live on campus for their first two years at SDSU due to the implementation of the Sophomore Success Initiative. If a local student chooses to live on campus despite being permitted to live off campus, they are only signed on to a one-year license agreement.

Cervantes said local students who seek to live on campus for a second year must fill out an interest form in the housing portal.

“Currently, if a student is interested in living on campus and is not required, they go to our housing portal and they complete an interest form and then that’s how we are collecting the information of students who are interested,” Cervantes said. “We reach back out in May and let them know.”

While the housing office anticipates being able to accommodate all students who would like to live on campus, Cervantes said  they cannot guarantee it.

Local student and kinesiology freshman Sara Pence said the Office of Housing Administration should work to clear up the distinction between those who get two-year housing and those who don’t. She said, when the time came to start thinking about housing for next year, she was sent information that was confusing and irrelevant to her situation as a local student.

“It might’ve been (distinguished) but I probably didn’t read it close enough and kind of got sucked up into the excitement of living with my friends next year and living in a sophomore apartment versus actually having to go find one,” Pence said.

Local student and business finance freshmen Luis Avalos said there were fewer housing options for non-commuters due to SDSU’s purchase of Aztec Corner, which is set to become university housing next year. He also said he would have preferred to have been reminded of his shorter lease length sooner so he could have been more proactive in seeking off-campus housing.

“If you want to be close to campus, then (there are) less options,” Avalos said.“The other thing too, since it’s last minute, prices go up because it doesn’t stay at a certain price. So, if you don’t (sign a lease) soon, then it’s more expensive and then you don’t have space.”

Cervantes said the Office of Housing Administration tries to make the distinction between the one-year license agreements and the two-year license agreements very clear in various forms. But despite the confusion, she still welcomes students to give the housing office a call or come into their office if they have any questions.

“We have information on our website, we had open forum information sessions in the fall and it’s something we talk about in our orientation in the summer and it also shows up when they sign the license agreement,” Cervantes said. “The dates are there that it’s not for two years, so we’ll continue assessing what we already have and what we can improve on.”