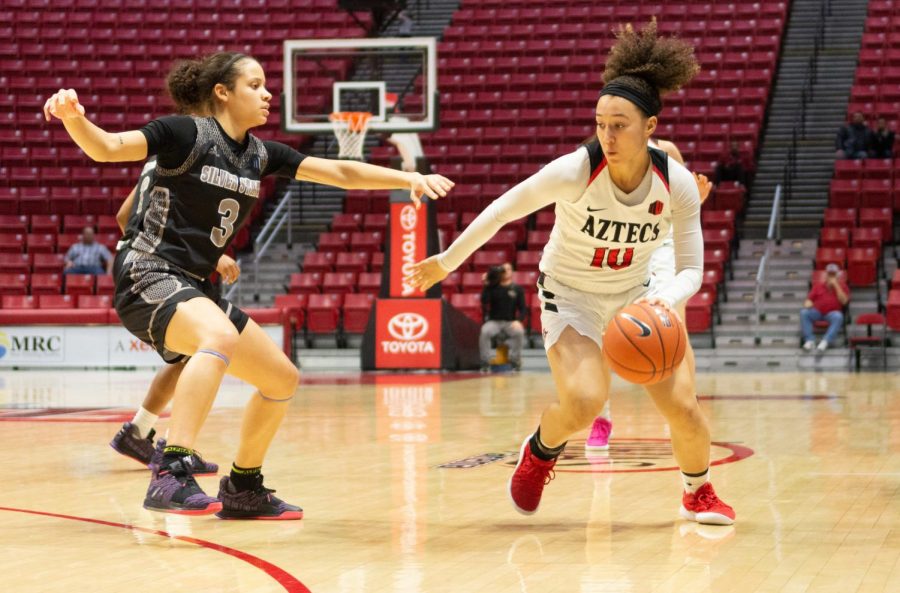 Sophomore guard Naje Murray drives to the hoop during the Aztecs 64-61 victory over Nevada on March 7 at Viejas Arena.

The Aztecs entered the fourth quarter up by six and grew their lead to nine.

A furious Nevada comeback saw the Wolf Pack regain the lead 59-57 with less than three minutes left. After a seesaw two minutes, the shot of the game went in. It was a three pointer by  sophomore guard Naje Murray to give the Aztecs a 62-61 lead. Murray finished with 21 points, four rebounds, two assists and shot 80 percent from the field.

“Everyone wanted me to shoot it,” Murray said, “I could hear my teammates on the bench saying ‘shoot it’ and I was like ‘okay’.”

With 4.5 seconds left, the Wolf Pack had an opportunity to win the game, but redshirt junior center Zayn Dornstauder sealed the deal for the Aztecs by blocking the last second attempt of Terae Biggs, who finished with 28 points.

Prior to the game, the Aztecs honored Arantxa Gòmez Ferrer, Loli Gomez and Monica Merkovsky as part of Senior Night.

Gòmez Ferrer reflected on her last game and the team’s mindset going into the final regular season game.

The Aztecs finish as the seven seed and will face the 10 seed Air Force on Sunday to tip off the Mountain West tournament. If the Aztecs win, they will play Monday against number two seed New Mexico.

Murray highlighted the importance of the game for seeding.

“It gives us an easier game for Sunday,” Murray said. “This game meant a lot to the seeding for us.”

After an emotional win, head coach Stacie Terry went over the game.

“It was really important for our team to come out and play good basketball tonight to give us a chance to win for our three seniors,” Terry said. “All three of those seniors represent selflessness, resilience, and a work ethic that I’ve never seen.”