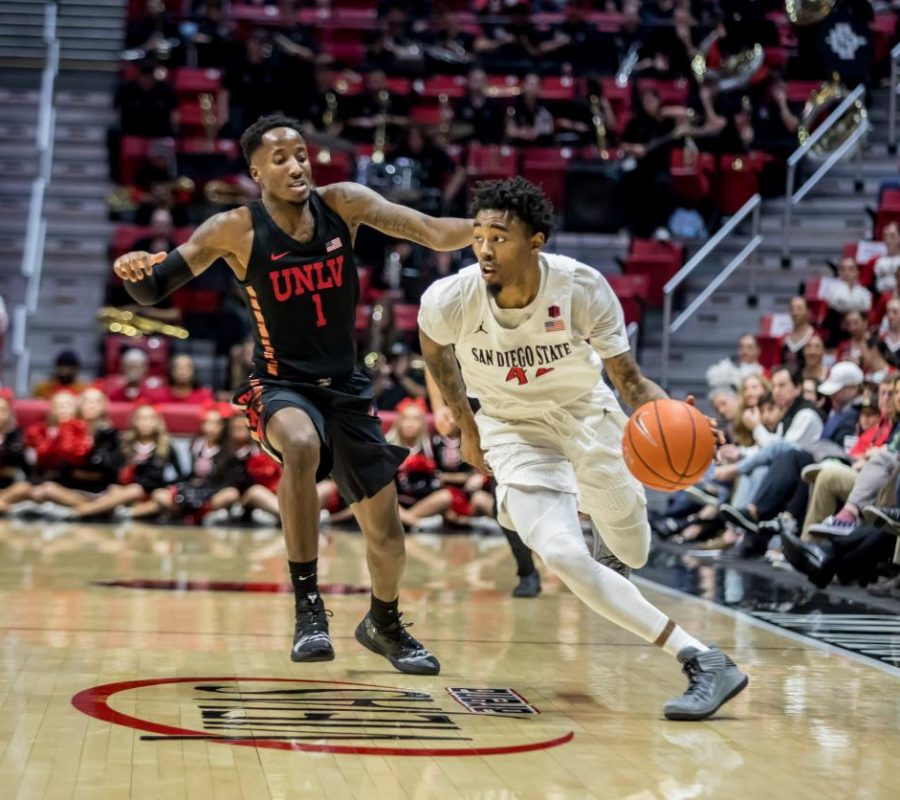 Senior guard Jeremy Hemsley drives past his defender during the Aztecs’ 94-77 victory over UNLV on Jan. 26 at Viejas Arena.

SDSU had a six-game winning streak and a 19-10 regular-season record before facing Fresno State in the quarterfinal.

SDSU has lost its last two games, including a 28-point beatdown at Nevada to finish the regular season.

Senior guard Jeremy Hemsley said while the two circumstances are unique, they both are filled with elimination-game pressure.

“It’s two different things,” Hemsley said. “At the same time, our backs are against the wall like it was last year. It’s win or go home, and I’m not ready to go home yet, so if you compare to last year’s team, it was the same situation.”

While the Aztecs were gunning for the three-seed against Fresno State last Wednesday, the loss may have actually helped them in the long run.

Head coach Brian Dutcher said as the four-seed, SDSU will have a favorable schedule that will give its players more rest between games.

“Your legs are a little fresher,” Dutcher said. “The thing I like about the four-five game is it’s at 2:30 in the afternoon. So if you can win it, you have a recovery time, you have prep time as opposed to the three-seed which we wanted.”

Dutcher added the three-seed would have been a tougher path to the championship game.

SDSU has defeated UNLV twice already this season, at home on Jan. 26 by 17 points and in Las Vegas on Feb. 23 by one point.

Sophomore forward Jalen McDaniels, who posted a career-high 30 points against the Runnin’ Rebels in the first matchup, is coming off a game in Nevada where he scored five points on 2-of-10 shooting.

The 6-foot-10 star has shot 30 percent from the field in the last two games, averaging 10.5 points compared to his season average of 16 on 47 percent shooting.

McDaniels said he embraces the responsibility of leading his team to victory.

“I accept that 100 percent,” McDaniels said. “I feel like when I’m on my best game, we have the best chance of winning. I got to step it up.”

Along with McDaniels, freshman forward Nathan Mensah will be a key to SDSU’s success in Las Vegas.

Mensah did not practice on Tuesday (lower back) but is scheduled to play Thursday.

Dutcher said Mensah’s play, especially away from Viejas Arena, will determine how far the Aztecs will go in March.

Mensah has averaged 12.5 points in his last two home games, while averaging a mere three points per game on the road.

“Nathan comes to mind – the difference when it comes to home and road success,” Dutcher said. “We have to have Nathan playing well for us to have a run in this thing.”

Despite a two-game skid, the Aztecs head into postseason play with their heads held high.

“We’re all just confident,” McDaniels said. “It doesn’t matter about the momentum. We just feel like we’re the best team. That’s what we got to go out there and prove.”

As the four-seed, Hemsley embraces being the underdog in the tournament.

“I like being the underdog in the tournament,” Hemsley said. “All we have to do is win three in a row, and I really think we can do that.”

Hemsley is headed to Las Vegas for his fourth and final trip to the Mountain West Conference Tournament.

The senior will be more excited because this will be the first time his parents will come watch him play in this event.

“My parents are going on this trip, and this is the first time they are going to Vegas, Hemsley said. “I’m more excited than I was my first year for sure.”