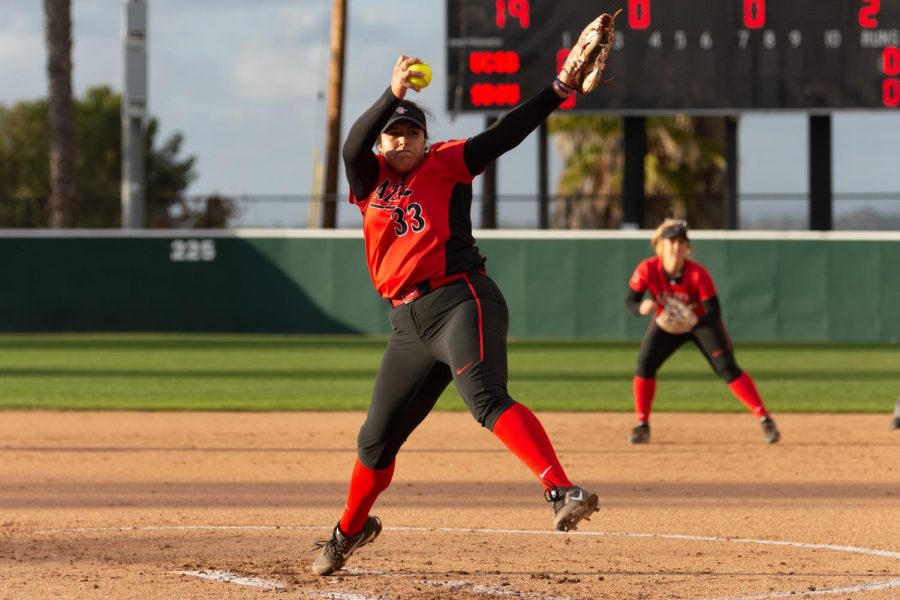 “Minus one inning, it was a great game,” head coach Kathy Van Wyk said. “Our pitchers have gotten off to rocky starts and what I’m most happy, was that (junior starting pitcher Marissa Moreno) didn’t fall into the bottomless pit; she worked her way out of it and as the game went on, she pitched really well.”

Moreno, coming off a hand injury that sidelined her for three weeks, started out slow, but was able to overcome it.

She suffered a three-run first inning, got out of a bases-loaded jam in the second and was able to cruise the next three innings.

“The first inning I knew was that I was struggling, so I knew my teammates were going to back me up and we were getting pumped in the dugout,” Moreno said. “We were hopeful in bringing things around.”

In five innings for Moreno, she gave up four hits, three runs (all earned), four walks and a career-high 11 strikeouts.

Moreno said getting strike one was key to getting an out for the Aztecs.

“I knew that if I started ahead I would be able to get an out or get a ‘K,’” Moreno said. “I was mainly focusing on hitting my spots and it turned out to be pretty good.”

Despite not getting much offense, junior outfielder Kiera Wright and senior catcher Molly Sturdivant both recorded two hits.

All the scoring was done in the first inning and the lone SDSU run came by Wright on a heads-up play.

Wright said this game was able to soothe her.

“I thought today’s game was actually very calm,” Wright said. “We also came in her with a very different confidence because it is conference. We came in with a good mindset today.”

The mindset is something for the team to focus on is key now the team is in Mountain West Conference play. This was the Scarlet and Black’s first MWC game on their schedule.

Wright said playing non conference teams identifies the variety of opponents the Aztecs (12-14, 0-1 MW) have faced and will face.

“It has prepared for diversity because we have faced slow, we have faced fast when they’ve blown it by us,” Wright said. “I definitely think it has prepared us for everything. One thing it has helped us is our defense because…we have to be on our toes.”

The Aztecs will face New Mexico on March 16 and 17 before getting ready for a weekend match against No. 24 Boise State March 22-24 in Boise, Idaho.