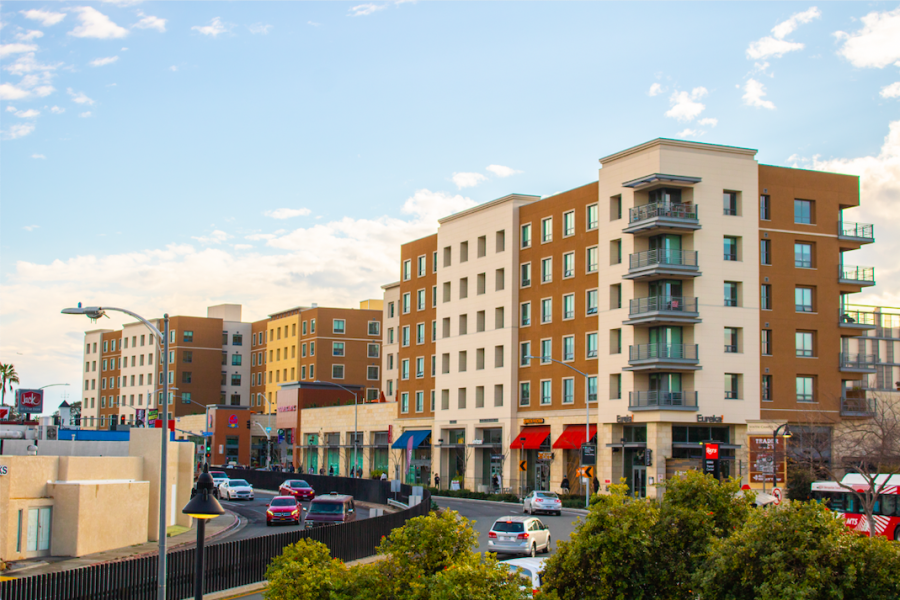 Students on Monday, March 18, staged a protest against the Sophomore Success Program, which will require non-local San Diego State students to live on campus for their second year beginning in the fall.

A petition being circulated online against the program has also gained significant traction, garnering more than 2,000 supporters as of March 22.

According to a statement on the petition, the program has forced certain sophomores to live in freshman dorms since there are not enough second-year housing options to accommodate the sophomore population.

“Due to the raffle, some Sophomore students will be stuck living in freshman dormitories,” the petition reads. “There is no reason that certain sophomores should be forced to live in expensive, yet disgusting and small living conditions.”

Housing officials have said this is a misunderstanding. No sophomores have been assigned to live in Chapultepec, contrary to rumors, and buildings such as Cuicacalli and South Campus Plaza North that have previously housed freshmen were initially built for sophomores.

In an email statement, the university said the program was designed to foster academic growth for its students.

“The development of Sophomore Success Program was informed by a growing body of research indicating that students who live on campus are better prepared academically, enjoy an increased sense of community and campus connectedness, and graduate at faster rates than those who do not,” the statement said. “The program provides sophomores with tailored academic and community support.”

Despite the benefits proposed by the university, many students expressed their frustrations in a small protest on Mar. 18 in opposition to the program.

Undeclared freshman Malachai Bielecki, who attended the protest, said the decision of the university to use dorms that previously housed freshmen was unanticipated and concerning for those assigned to live in these locations.

“Everyone’s really caught off guard with that and it seems like a big money grab for the school,” Bielecki said.

Biology freshman Cameryn Richardson said the use of freshman dorms for sophomores is unfair due to the expectations students have as second-year students.

“We were promised (Piedra del Sol), Montage and The Tecs,” Richardson said. “Now, towards the end of the housing application process, people are (being assigned to live in) Cuicacalli, but not everybody wants to live in (Cuicacalli).”

In response to how the university should tackle the housing issue, students said they have been most startled about the lack of transparency they’ve seen from San Diego State.

Marketing freshman Kylie Brown said the university first didn’t inform her and other rising sophomores of the decision to place them in buildings such as Cuicacalli, then was unhelpful in resolving the issue.

“I just want the university to listen to us and respond to us because right now they haven’t been giving us any real answers,” Brown said. “They should be trying to provide us with actual answers, listening to us and treating us like adults, and I think that they should be taking us seriously.”

University officials said in the email statement they have communicated the details of the program to the students through a lease agreement all non-local students were required to sign upon admission.

“All current non-local SDSU students were informed of the program and the subsequent two-year live-on requirement prior to their application and admittance to the university as freshmen,” the statement said. “The same students also signed a two-year license agreement.”

Although the petition directly concerns first-year students, its rapid rise in supporters has allowed other members of the SDSU community like parents to take notice and support the cause. Brown said she was surprised to see how fast and far the petition has reached.

“I signed it and posted it on my Snapchat story for everyone to sign it and it’s kind of crazy how fast it’s grown,” Brown said. “Because the first day, the goal of the petition was only at 1,000 and now it’s over 2,000 and still gaining more signatures every day. I scrolled down and I see parents, I see friends (that also signed).”