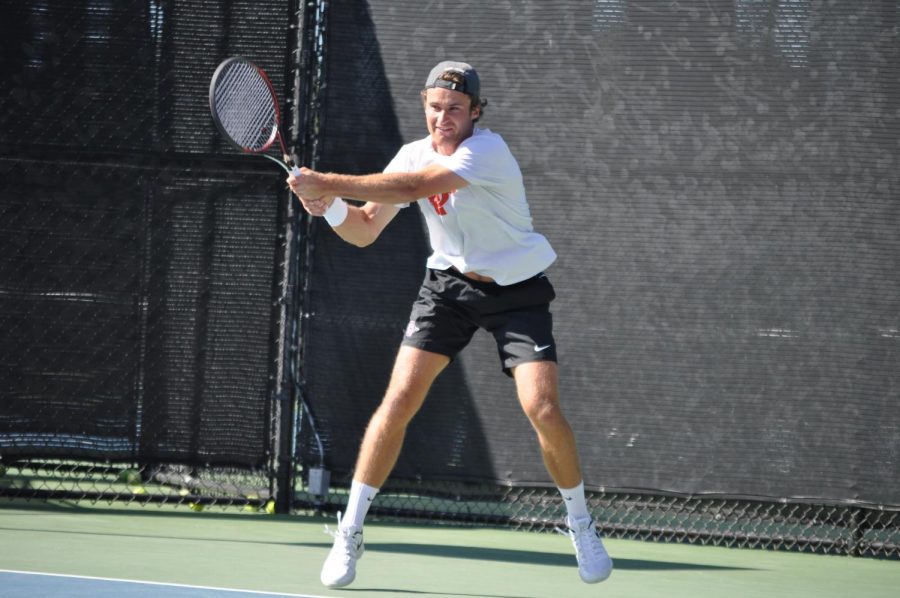 Senior Sander Gjoels-Anderson swings his racket during the Aztecs' 4-1 loss to Harvard on March 22 at the Aztec Tennis Center.

San Diego State men’s tennis was defeated by No. 38 Harvard, 4-1, on the first day of the San Diego Spring Classic on at the Aztec Tennis Center on March 22.

Head coach Gene Carswell said the matches were close, but he wanted to get the victory.

“I would’ve like to come on the other side,” he said. “I’m proud of the way our guys fought and competed today. That’s one of the better teams in the country, highly nationally ranked and we’ve got some things to build on from that performance.”

The home squad had opportunities to steal the victory.

Sophomores Jan Kirchhoff and Ignacio Martinez were able to get the victory in doubles over Brian Shi and Robert Wrzesinski, 6-2.

Carswell said there were great matches throughout the first day of the classic.

“A lot good competition on campus today… this is one of the best college events you could be a part of,” Carswell said. “We’re really happy that we got all of these teams to come out our way and have a good day of San Diego weather to do some battling out here.”

The Aztecs were on six different courts during their match. Luckily for them, Carswell said his coaches help him with strategy and with who to coach more.

“Coach Jeff Thomsen has been with me forever and coach Larry Willens, he’s a legend coaching in San Diego, so I don’t have to be at all those courts at once,” he said.

Despite coaching multiple players at once, Carswell would like to be able to have more one-on-one assistance in a match, especially playing a ranked team, like Harvard.

“It would be nice to be able sit with (senior) Sander (Gjoels-Andersen) or with (junior) Fabian (Roensdorf) or Jan (Kirchhoff) on a day like today and help get them through their match,” he said. “You have to divide and conquer and choose your moments where you’re trying to give some helpful information here and there and impart what you’re seeing from their opponents and what they need to implement in their play.”

The opponents the home team will face gives them good competition for not only this weekend, but for the rest of the season, according to Carswell.

“The tougher teams we get to face, it makes us that much tougher when we hit the end of the year and our goal is to play our best tennis at the end of the year,” Carswell said. “We want to be that team that makes the tournament that’s going in an upward trend versus a downward trend. Seeing this tough competition is going to pay dividends when we go to into conference and our backs our against the wall.”

The Scarlet and Blake will face Drake on March 23 to continue the classic.