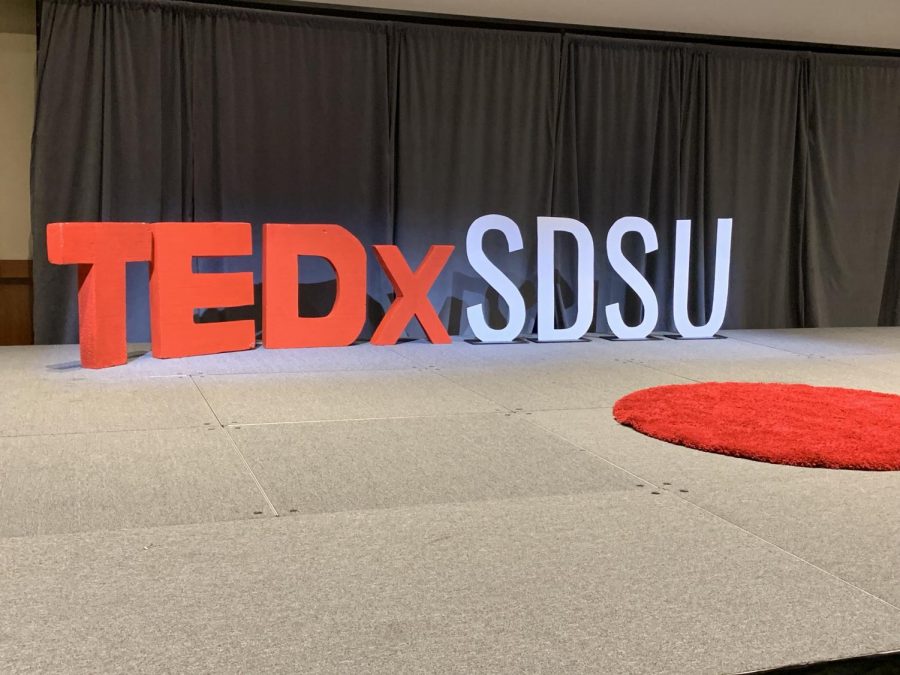 Hundreds of attendees filed into Montezuma Hall on March 24 for the seventh annual TEDx event hosted at San Diego State.

Also on the program were UC Berkeley sophomore Anika Kumar and founder of the intergenerational nonprofit Forget Me Not, entrepreneur, magician and motivational speaker John Kippen, San Diego artist and activist Mario Torero and Lorie Hearn, founder of inewsource, an investigative journalism nonprofit in San Diego.

Reflecting on the theme of this year’s event, (MOMENT)UM, each of the speakers shared their stories, emphasizing how a single moment, or several, started them on the path to where they are today covering a wide range of topics from optimizing stubbornness to using magic to promote inclusivity.

Entrepreneur, entertainer and magician John Kippen started the morning off with an inspirational talk about how performing close-up magic and mentalism helped him overcome health issues and deformities resulting from a brain tumor.

He shared with audiences his path to recovery after the right side of his face was paralyzed resulting from surgery to remove the tumor. Kippen challenged the audience to treat people who are different with the same compassion they would expect for themselves.

“Next time you see someone being disrespected, in need of a helping hand or just a friendly smile, let your compassion intervene,” he said. “Use your superpower of a simple hello to let them know you care and create momentum to make the world a slightly better place.”

Spoken word poet Amen Ra, who spoke at last year’s event, served as the master of ceremonies throughout the morning and afternoon, introducing each speaker and energizing the audience.

Anika Kumar followed Kippen with a talk about ageism and the implications it has on the lives of older people. She ended her talk by sharing with the audience ways in which they can combat ageism and lift up older generations.

“Celebrate age,” Kumar said. “Appreciate the elders in your life not just for their experiences and wisdom, not just because they may be several decades older than you, but because they are genuinely awesome people that have a lot to share.”

After Kumar, Feeding San Diego founder Vince Hall took to the stage to share how the momentum behind the food nonprofit focused on sustainably ending hunger in San Diego.

County has fueled a movement across the state and country, showing other organizations that the food-rescue approach is scalable and effective.

Several of the talks were punctuated by Jasmine Miles’ powerful poems inspired by her life and the moments that defined her experiences growing up.

Katherine Stanchis ended TEDxSDSU on an inspirational note as she described how stubbornness, a trait that is often seen as negative, helped her overcome a devastating injury and power through a tough recovery to achieve her goal of becoming a story producer at NBC 7.

She left audiences with a phrase that helped her stubbornly go after her dreams:

“Every life has some sort of challenge,” Stanchis said. “This just so happens to be yours, but you are capable. Stay stubborn”

“I love TED talks in general,” Johnson said. “It was cool to come to see something that was at SDSU with speakers from SDSU and the community and having it closer to home.”

“The purpose of this event today is not only to get you to open your mind up and think critically about new ideas, but we’re hoping you’re here today because right now is your moment,” Khan told the audience in her introductory remarks. “Whether you need that momentum initiated, recharged or sustained, we hope you leave today inspired.”