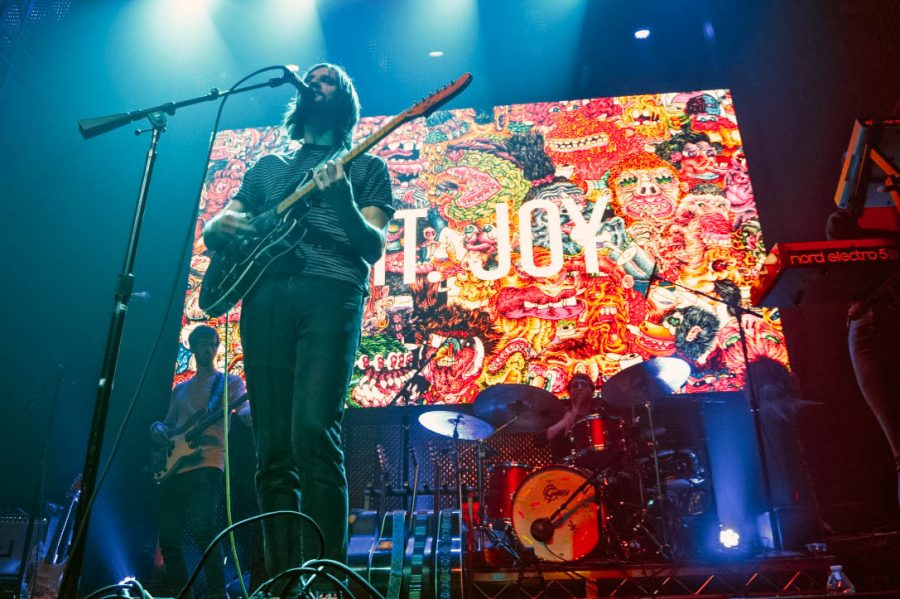 Wilderado and Mt. Joy concluded their tours on Sunday, April 7 at the Music Box in San Diego, with two raw authentic performances leaving the audience feeling encouraged for the future of both fairly new bands.

Texas native and now-Los Angeles-based Wilderado has three EP’s under its belt, all lush in rich vocals and folk-rock tunes showcasing the band’s southern roots.

The four-man group opened the night with its well-known hit, “Morning Light.” The track featured on the band’s older EP “Latigo” sounds like the sweet beginnings of a summer morning.

The rustic jean jacket-filled crowd nodded their heads in bliss, IPAs in hand, to the band’s folk-rock set. Lively frontman Max Helmerich closed the performance by leaving the crowd with a small piece of advice: “Be good to each other. It’s easier than you think.”

Next up was Mt. Joy, and listening to the band felt like home due to its music evoking memories through the songs’ tender narratives of pain, beauty and surviving life.

The band strolled on stage with the cover of its self-titled album — kaleidoscopic cartoons of sheep, dinosaurs and slowly melting faces — plastered across the screen, illuminating the room with a peaceful ambience much like the music Mt. Joy was soon to perform.

The Philadelphia-based folk group’s following has grown quite large since the release of its debut self-titled album in 2018. With frontman Matt Quinn’s potent vocals and intricate lyrics, it’s a little shocking how talented the band already is, considering it’s only one album deep into its music career.

Mt. Joy led the performance with fan-favorite track “Sheep,” which was re-released, changing the sound from the album version.

The setlist featured nearly every track from the album, and the fans in attendance sang along to every word, showing their strong dedication to the group.

Mt. Joy has the ability to leave a hopeful resonance in even some of its darkest songs. The band does not cut corners on the struggles faced in life, but rather addresses them in a peaceful and honest way.

“If I don’t wake up, trace me on the asphalt / let the morning rain wash me away” Quinn sang during the poignant song “Younger Days.”

The lyrics of each song are detailed and specific, but each individual who listens is able to walk away with their own meaning, as the band successfully communicates overarching themes on the nature of being human.

“The concert was incredible, and Matt Quinn is a legend,” management information systems senior Lucas Baiocchi, who now has seen the band twice in concert, said.

Two new songs, “Bug Eyes” and “Ruins,” were performed, and the crowd listened along, hypnotized by the promising future of Mt. Joy.

The setlist ended with the band’s most popular track “Silver Linings,” a song about finding the smallest sliver of light on even the darkest days,

“And wear your silver lining/ Wear it close to your skin” the band chanted to the audience.

Every difficult vocal heard on the album was relayed in concert just as emotionally and impressively as what is heard on Spotify or Apple Music.

Coming back for an encore, Mt. Joy left the crowd with “Julia,” a song which tells the story of a nervous man entranced by the “big brown eyes” of his server at a restaurant.

“But Julia, fix me a blue sky in the world sun / And I’ll be back now / Julia, how long, how long till I’m all gone?” Quinn sang during the ballad as fans screamed along, echoing throughout the venue.

The song took a turn halfway through as the band mixed in the Bill Wither’s classic “Ain’t No Sunshine,” and then concluded with the final 60 seconds of “Julia.”

“I liked how they mixed in ‘Ain’t No Sunshine’ into ‘Julia’ for the finale and how small the venue was,” biology senior Chase Bishop said.

As seen during the set, Mt. Joy has new music under wraps and the songs foreshadowed an album equally as pure and lived in as its first album. Even on the hardest days, Mt. Joy makes finding silver linings easy through its music.