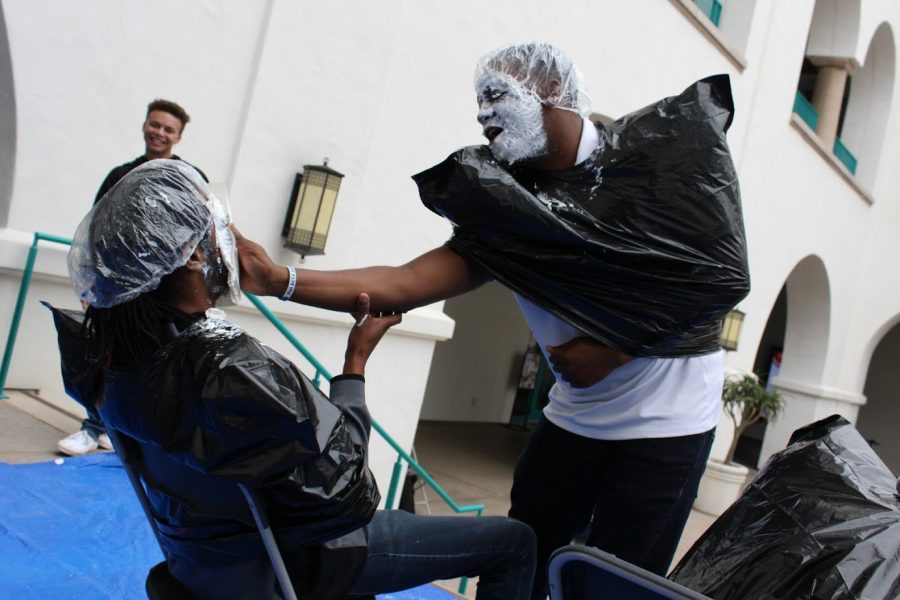 A student gets pied during the Greek Week event "Pie-a-Prof."

Greek Week’s support of the local nonprofit Promises2Kids, a charity focused on working with foster youth, proved successful as the event raised over $10,000 for the cause.

Greek Life Activities Board Vice President of External Affairs Becca Freeman said the decision to choose Promises2Kids was made because of a desire to support foster youth as they aspire towards university education.

Freeman said the board chose Promises2kids because of the versatile programming they provide for foster children. The organization’s program that will benefit from most of the fundraising will be Camp Connect, which provides a four-day camping trip filled with outdoor activities that allow separated siblings to reunite and interact.

Greek Life Activities Board President Cooper Rofsky found the program to be valuable in helping foster children with issues some may not be aware of.

“A lot of times in foster homes, siblings are separated, so the premise of that camp is to bring children together,” Rofsky said.

Greek Week teams were made up of four different factions of fraternities and sororities. The goal of each one was the same: to raise as much money for the Promises2kids as possible. They tried a couple of different strategies such as a newer one called “Pie Professor” where a donor can contribute money to throw a pie at a professor, university executives and even police officers.

Greek members also kept their fundraising strategies traditional by playing a friendly game of competition known as “change wars.” The goal of the game is to have each team collect as much change as possible while avoiding any dollar bills.

“If you put dollars in the other teams’ (fundraising) buckets it counted negatively against them, but if you put coins in your team’s bucket it counted positively,” said Rofsky.

Greek Week not only exercised different methods of fundraising that benefited Promises2Kids, but it also resulted in building unity across different fraternity and sorority groups that may not happen often.

“Our goal with this is to have common philanthropy for all of Greek life,” said Rofsky.

Philanthropy also has a positive outcome for Greek life’s image, which Rofsky said is normally not very positive.