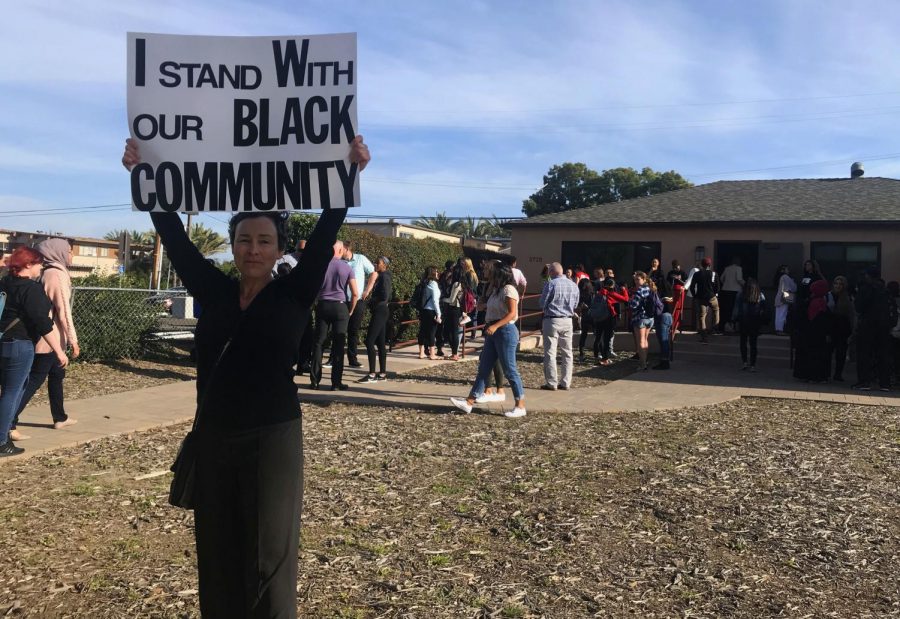 Students, teachers and faculty gathered at the Black Resource Center on April 15 to sign pledges to “create a welcoming and safe climate for San Diego State’s African American community.”

The pledge had a checklist with each point directed at a specific group: faculty, staff, administrators and students. Some examples included faculty members doing things like attending a seminar to reduce the classroom achievement gap for underrepresented students or implementing text that examines structural racism into their classes. Students were encouraged to pledge to enroll in an Africana Studies course or partner with the Black Resource Center on collaborative programming. All were invited to donate to the Black Resource Center and Africana Studies department and be an upstander to anti-blackness.

The pledge comes after the Black Resource Center was broken into over the weekend, resulting in a damaged television and other items being moved around the building. No center employees were present when the vandalism occurred.

University spokeswoman LaMonica Everett-Haynes said the incident was under investigation and that officials still don’t know how the building was accessed. She said the incident resulted in more than $400 in property damages, mostly to equipment.

Wood said the black community on campus is angry and hurt following the break-in. This incident marks the second time this semester that the center has been an apparent target, with a video released in early March capturing the sound of a racial slur being shouted at the BRC by a group of passersby.

With this in mind, Wood said he thinks it is time for the university community to take a hard look at how they support black students and what needs to change.

“What we want people to do is to be able to leave here with a commitment to doing something beyond thoughts and prayers,” Wood said. “While we certainly value their prayers and thoughts, what we really want to see now is their action to help us create a community that is welcoming for all of our students.”

Africana Studies assistant professor Antwanisha Alameen-Shavers was one of the faculty members who went up to speak. She said it was important to identify the enemy in their fight to advance this cause as a call to action for the people listening.

Business junior Brandon Phillips said he found the vandalism to be alarming and that the university needs to instill some new policies to more adequately address the matter.

“I would like to see (identity centers) protected more so if we could get some policies either to have police officers here or a security officer that is here full time,” Phillips said. “Anything like that will probably help protect these spaces.”

Political science senior Chloe Bycoskie said the vandalism is outrageous and that people outside the black community need to step up.

“I think even if you’re not a black student, you still have to be an ally in situations like this and you have to show support,” Bycoskie said. “Like some of the speakers were saying, sometimes if you don’t know what to do, (you) just have to show up and be present so that’s what I’m trying to do today.”

Psychology junior Saadia Ali said she was disappointed by the break-in, and that she believes the school should uphold anti-discriminatory laws regarding harassment and embrace a zero-tolerance approach. She said used a hypothetical example of a professor harassing.

“Get them fired,” Ali said. “There should be no room or space for harassment on this campus.”

In the meantime, students, faculty and staff are encouraged to sign the pledge. The form can be found online on the Center for Intercultural Relations under the Black Resource Center tab.