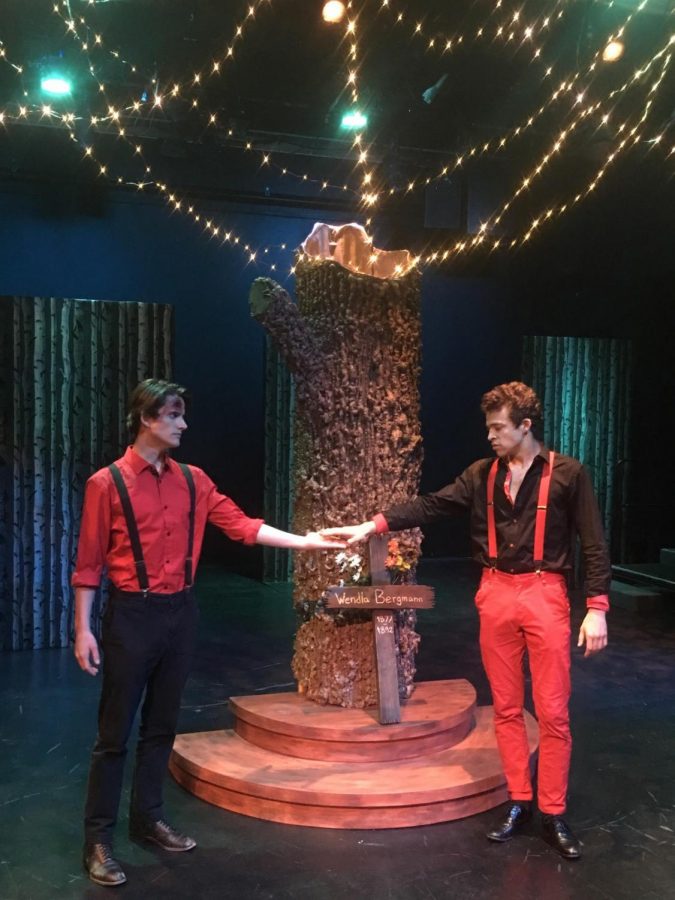 Moritz (Ben Breitenstein) and Melchoir (Brendan Mokler) take a moment in front of Wendla Bergman’s grave site. Set design is by Emily Klemmetsen, lighting design is by Hannah Beerfas, costume design is by Jill Jones and makeup design is by Mia Marx.

Presented by the Skull and Dagger Dramatic Society, “Spring Awakening: A Children’s Tragedy” shook the stage of the Experimental Theatre April 12-14. It was written by German playwright Frank Wedekind, translated by Jonathan Franzen and directed by Adam Robinson, a third year theatre performance major at San Diego State.

“Spring Awakening: A Children’s Tragedy,” is an emotional production, simultaneously filled with laughter and heartache. The show deals with a group of adolescents coming of age and exploring their relationships with others. In the darker moments, there are instances of child abuse, rape, suicide and death from unsafe abortion methods. The heaviness was not without reason, however.

“I want the audience to feel something after seeing this show,” Director Adam Robinson said. “I have my ideas and messages that I want to communicate through the show, but I don’t want to force too much on the audience. Whether people walk away with an emotional connection to the characters or walk away thinking, ‘What the heck was that?’ is viable for me. I just want to make an impact of some sort. I want the audience to feel different than they did when they came.”

Robinson said that the idea to produce “Spring Awakening” came to him shortly after the school shooting in Parkland, Florida in early 2018. He noticed the push for gun reform was coming from the young students rather than officials, as the children were the more progressive of the two, which he related to “Spring Awakening.”

Hannah Luckinbill, a theatre performance junior, plays the role of Wendla Bergman, a 14-year old who is raped, and later dies from unsafe abortion methods. Hannah said that although “Spring Awakening” was written in 1891, it is still relevant to society today, including the themes of religion, sexuality and authoritarianism present in the play.

“I wanted the audience to take away that nothing good can come of absolutes,” Luckinbill said. “Everything should be questioned and examined, because such repressive climates as the ones we see in ‘Spring Awakening’ can only breed injustices. The audience should leave knowing that they have the power to prevent such tragedies from occurring by listening to and exercising empathy toward others.”

“By not teaching kids about their bodies and how they work, it causes them to run wild and make bad decisions because they don’t know the difference between what is good and what is bad,” Mokler said. “There’s also an element of shame that plays into this production. The characters feel humiliated by simple bodily pleasures and natural hormones that cause them to do unspeakable things. It is imperative to find a balance within teaching your children and letting them discover and learn on their own.”

Ben Breitenstein, a theatre performance senior, plays the role of Moritz Stiefel. Moritz is a teenage boy who commits suicide after suffering from parental and societal pressure.

Lexi Vierra, a theatre performance sophomore and a Skull and Dagger board member, said Moritz’s in-depth monologue before committing suicide was captivating.

“He truly conveyed the essence of the character,” she said. “The monologue stood out to me as the most memorable part in the show. It made his reentrance at the end of the production all the more heart-wrenching.”

Director Adam Robinson said “Spring Awakening” was a 13-month long project and would not have been possible without the talent and input of the entire cast and crew.

“This was a collaborative process,” he said. “In my rehearsal rooms, I made sure that everyone had a say about how the production went. I love hearing ideas from all my cast and crew, and “Spring Awakening” would not be what it is without those ideas.”