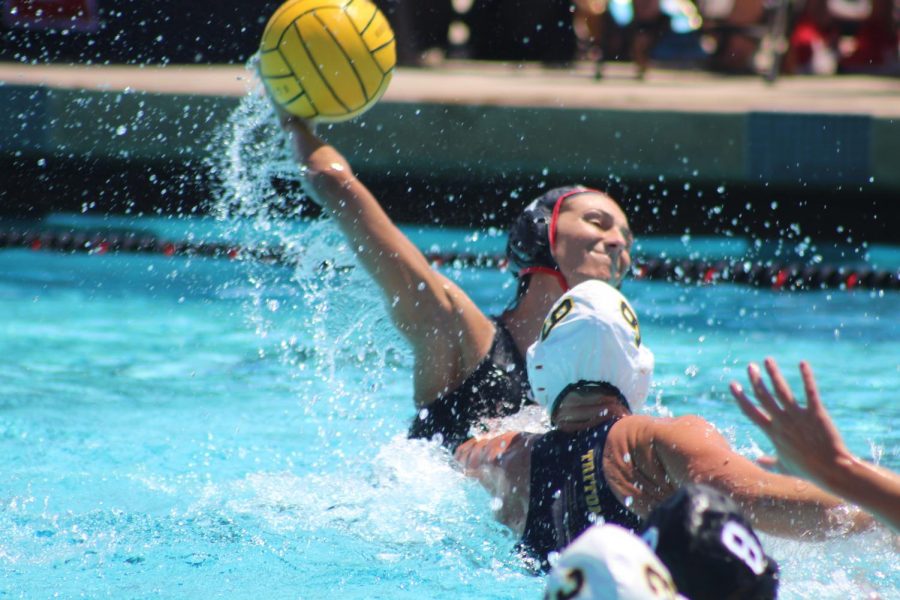 Junior utility Shelby Kraft takes a shot during the Aztecs' 9-5 loss to UCSD in the Harper Cup on April 20 at the Aztec Aquaplex.

San Diego State water polo was defeated by UC San Diego, 9-5, during the Harper Cup on April 20 at the Aztec Aquaplex.

The Aztecs could not get their shots to fall despite taking 13 attempts in the first half, while the Tritons scored six times.

“We got into a couple of bad swings with calls that didn’t go our way, both offensively and defensively that resulted in a two-goal swing,” head coach Carin Crawford said. “Teams really thrive on those kinds of runs and UCSD exploited those today. It was just too little, too late.”

The Tritons started the game on an 8-0 run before the Scarlet and Black finally scored late in the third period.

“She’s a lethal shooter, and speaking to Denny Harper after the game, he said, ‘I think (Kraft) needs to take more shots,’” Crawford said.

Kraft had eight shot attempts throughout the game.

The junior utility said that taking over did not take one person, but the whole team.

“(The goals helped) because everyone stepped up this game and we didn’t rely on one or two people,” Kraft said.

In addition to Kraft scoring thrice, senior driver Mary Myers scored on a powerplay goal with 2:51 left in the final period.

Myers, who is one of three seniors on this season’s squad, wanted to go out having a game that the team will remember.

With this being the final game of the regular season, it was also Senior Day. The team recognized Myers, Hannah Carrillo and Maura Cantoni before the match for all of their hard work they have put in to this program.

“It’s hard to see them play their last (home) game and especially we would like to be celebrating a win to send them out,” Crawford said.

With the win for UC San Diego, this is the Tritons’ fourth straight Harper Cup and their fifth in the last six meetings.

The MVP for this game, picked by Denny Harper, the namesake for the trophy, was Tritons’ goalkeeper Bennett Bugelli, who had 14 saves.

The Aztecs have locked up the two seed in the Golden Coast Conference Tournament at Fresno State and will face the No. 7 seed, Santa Clara at 3:15 p.m. to start the tournament on April 26.

Crawford said getting out to a good start will be key during the tournament.

“Getting our offense clicking is going to be the goal, especially for the last two losses that we’ve suffered here,” Crawford said. “I think the team will be in the mentality of putting the ball in the back of the net and we’ll be in a situation where we’ve got to keep winning to get to the championship game on Sunday.”