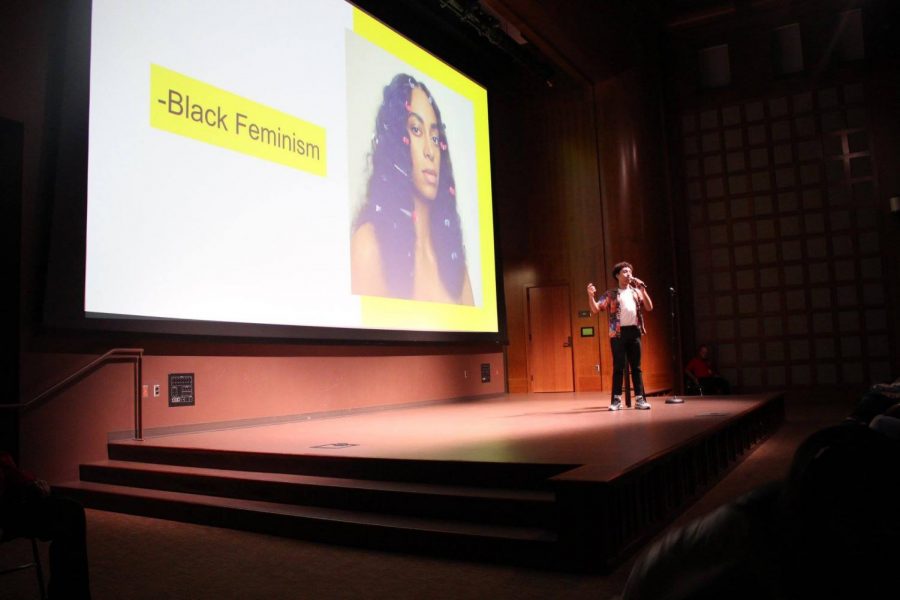 The Daily Show comedian Jaboukie Young-White brought his subtle and nuanced style of comedy to an intimate yet enthusiastic crowd at San Diego State on Friday, April 19.

“The crowd was just the right size for him to share his very personal stories and for him to really perceive how the crowd was reacting,” journalism and media studies sophomore Poh Tai said. “He was so candid in the way he shared and was very relatable.”

Students in Montezuma Hall at the Conrad Prebys Student Union gave the comedian a warm welcome as he began his show. As a Daily Show correspondent, stand-up comedian, social media personality and writer for shows like “American Vandal” and “Big Mouth,” Young-White has garnered a significant fanbase, and he opened the show with big laughs.

His explanation on modern feminism was accompanied by slides of the Knowles sisters. He joked that singer Beyoncé Knowles was the mother of modern feminism, while her sister Solange was the point of reference for modern black feminism. This set the tone for Young-White’s non-conformist and unique brand of joke-telling.

The crowd resonated with stories of how he tired of hearing comedians tell unoriginal stories about their girlfriends, and offered his take on what it’s was like being a young gay comedian in Hollywood.

“I had tried doing stand-up so many times at open mic nights where a 38-year-old alcoholic white guy would just get on stage and be like, ‘My f—ing girlfriend is always on her period!’”  White said. “It was so bad. I could not engage with that.”

He recalled auditions and castings where the characters he was reading for were written as either stereotypical “gay besties” with oversexed and creepy personalities, or “bro’d up” but with the exact same dialogue.

Young-White’s promotion of inclusion and intersectionality were messages students said they found both funny and refreshing.

“He likes to highlight on community-centered issues.” political science junior Carla Celis-Arellano said. “Right now that’s very important because things are so divided especially with what happened here recently with the vandalizing of the Black Resource Center.”

Celis-Arellano continued to say that having a person of color with a platform like this helps diffuse tension and gives people someone to look up to.

His appearance also seemed to serve as a stress reliever for students experiencing the crunch of upcoming finals.

“Puppies are cool, but I need reality and jokes,” hospitality senior Zoe Gonzales said. “It really recharged me because we got to laugh it out and now I can get back to work.”

Young-White told jokes about sexual orientation as well, referring to how one of his brothers identifies as bisexual and his other brother identifies as heterosexual.

“It was really nice to have a queer person of color here in the theater because I like to see representation in the shows that I go to,” sociology Senior Bianca Herrera said. “I felt like it was not only an affirming space, but he’s hilarious too.”

Stories of Twitter trolls, gunpoint robberies and which insects he believed were definitely gay were all punchlines and were equally met with laughter. He even made jokes when the cordless mics he was using stopped working three times during his set.

“I wonder how many of these I can get up here,” Young-White said, as he gestured to the numerous microphones laid out at his feet.

While his set was well-received, students also appreciated when he took time to hold a Q&A session after the show. He fielded questions about working with other comedians and how his career started, keeping all of his answers both entertaining and informational.

He answered one question about how he knew comedy was his calling with an anecdote detailing a performance he gave during a school production of “The Miracle Worker,” the story of Helen Keller and Anne Sullivan. He had a line in which he had to throw a chair and say “Not my favorite chair!” Young-White said he reveled in the laughs he got from that, and he has been chasing the high of getting big laughs ever since then.

“I knew I was going to do this forever.” Young-White said.