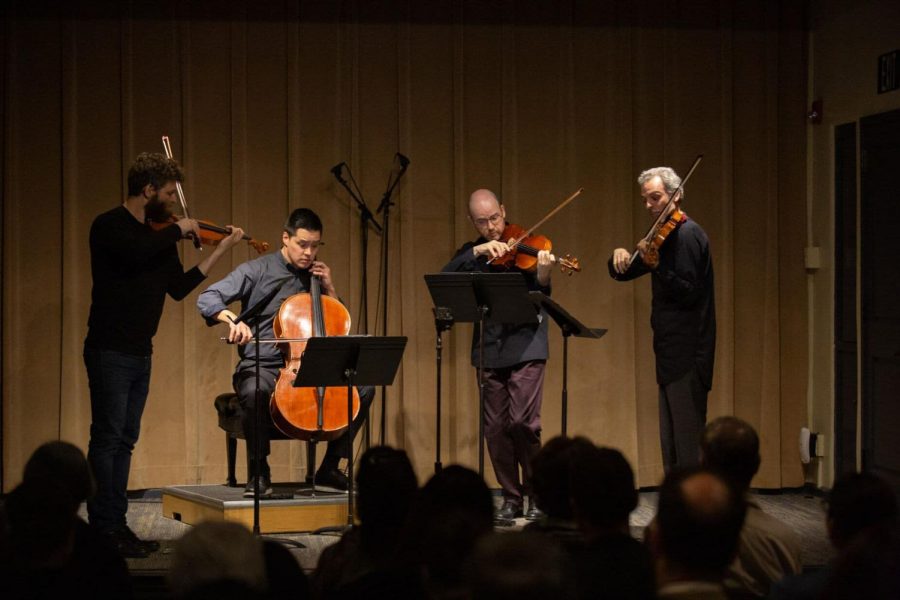 Pei-Chun Tsai, a violin lecturer at SDSU and a violinist in the San Diego Symphony Orchestra, put on the festival. She said her main goal was to get students to interact more with instrumentalists.

“I’ve been here for eight years, and I used to invite artists to come. Usually they’d come for one hour or two hour and then teach the class and leave,” said Tsai. “And then I thought to myself,  ‘what a waste’ you know, to just come and spend two hours with our students.”

Tsai said she hopes this becomes a recurring event for students. She said it is also beneficial for students who are pursuing higher education and are in need of letters of recommendation.

Instead of the regular hourly visits, the music festival offered several master classes throughout the week for both undergraduate and graduate students. Brooklyn Rider, a well-known musical quartet based in Brooklyn, New York, and clarinet player Kinan Azmeh were among the lecturers.

Azmeh, also known to be the first Arab musician to obtain a first prize award in Moscow’s Nicolay Rubinstein International Youth competition, said it’s more than just coming to the school to play and perform. He said it’s about giving back and seeing the impact it has on others.

“It’s about becoming part of a community, sharing your most intimate feelings with the world basically,” he said. “So especially when you come in a university context, it’s important because you don’t only do the performance, you interact with the students. You try to teach them and help them to get things out. But also in the meantime, you get inspired by the students.”

The final concert, which was hosted on Friday, April 19, included individual and collective pieces played by the quartet and Azmeh. Many students and other members of the San Diego community came to witness the performance.

The first part of the performance featured the quartet performing a piece on healing, derived from inspiration from the story of David and Saul found in the Abrahamic religions. The quartet said they focused on the story of healing and the good and the bad that a person can go through before reaching the end. The second half of the concert were solos performed by Azmeh and two other members of the quartet.

One of the students in attendance was Jasmin Rikard, a third-year music performance major. Rikard said she believes the decision to bring Brooklyn Rider to campus was a worthwhile and smart decision.

“San Diego’s becoming known for its classical music and to have such a large ensemble here in San Diego once a year… it would be really influential,” she said. “To have a group like Brooklyn Rider that plays contemporary pieces and classical pieces with a lot of soul — it’s important.”