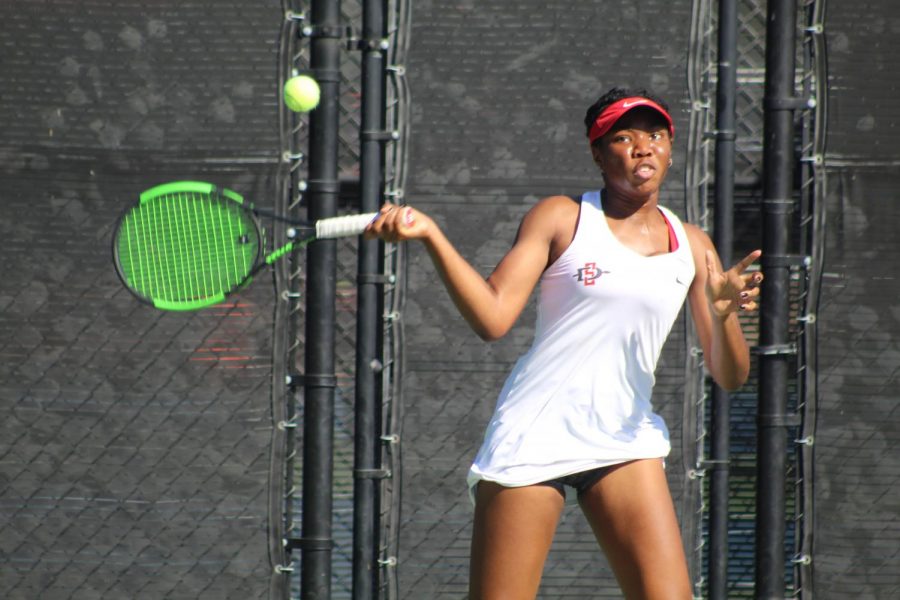 Sophomore Nnena Nadozie competes in her doubles match during the Aztecs' 7-0 victory over UC Riverside on Jan. 27 at the Aztec Tennis Center.

No. 3 seed San Diego State women’s tennis will advance to the Mountain West Championship after eliminating No. 2 seed Air Force by a final score of 4-2 in the semifinals on April 26 at the Aztec Tennis Center.

Nadozie said she knew the team would recover from the doubles point loss if they executed in singles play.

“Regardless if we won doubles or not, we know that as a team we always bounce back from losing the first point,” Nadozie said. “We just had to go out there and play our game.”

The Scarlet and Black did just that, with Nadozie leading the charge.

For the second day in a row, Nadozie’s singles win over Kerrigan, 6-2, 6-1, was the first singles match to conclude, improving the overall scoreline to 1-1.

SDSU freshman Shakhnoza Khatamova was unable to improve her win total in singles, however, as she fell to Fumagalli 6-4, 6-0.

Smith and Moinard recovered from their doubles loss, winning their singles matches in two sets and leading a 3-2 comeback for the Aztecs.

Melosch’s match proved to be the difference, as she defeated Harvey 4-6, 6-2, 6-3 to send the Aztecs through to the day four of the competition. Consequently, Mulbarger’s match against Lieberman went unfinished.

Although she is a freshman, Melosch said she is grateful for the chance to play on a big stage like the Mountain West Championship

“This is all new and I’ve never done it before,” Melosch said. “But it was very fun to play with the team and (get) this experience and opportunity.”

“That is a lot of pressure, especially from someone (who’s) never played anyone from the Air Force Academy,” Mattera said. “I thought she did a great job of rallying herself after dropping that first set.”

SDSU will take on No. 1 seed UNLV in the championship on April 27.

The Aztecs lost to the Rebels by a final score of 4-3 in San Diego just two weeks ago.

Mattera said SDSU will take its time selecting lineups prior to Saturday’s matchup.

“Tomorrow, we’re going to see what the morning brings, but we have eight really solid players,” Mattera said. “We have a couple of options and we’ll see what we think is our best foot to put out there to take us forward against Las Vegas.”