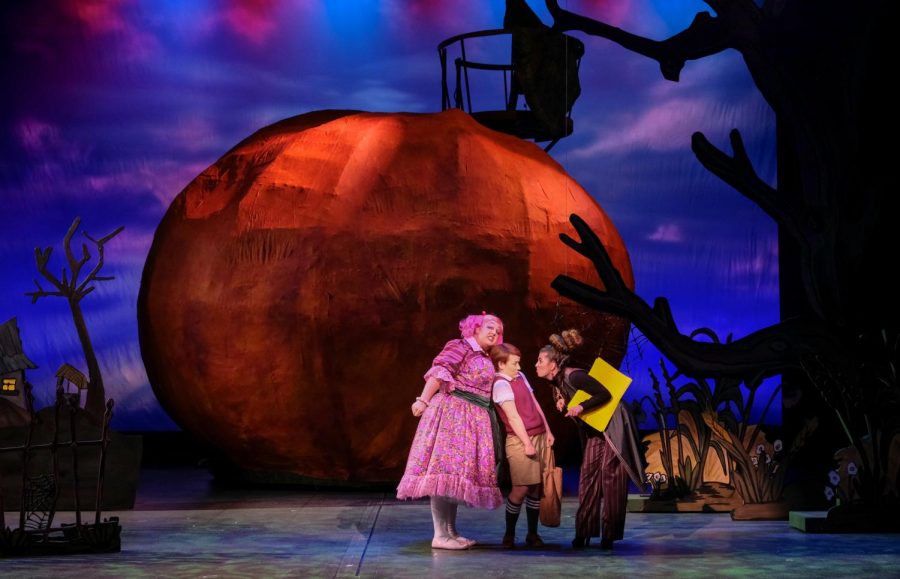 James (Emma Chassey) with his new, unexpected family in the Giant Peach.

San Diego State theater students will take on Roald Dahl’s classic book “James and the Giant Peach” in their latest production, showing in the Don Powell Theatre this week.

“James and the Giant Peach” is directed and choreographed by Stephen Brotebeck, associate professor of musical theatre in the master of fine arts musical theatre program.

“James and the Giant Peach” is a tale of a young, orphaned boy, James, who is sent to live with two evil aunts. One day when doing chores, James has an interaction with a mysterious figure, who teaches him of spells and magic. Soon, James sees the magic come to life when an old, unfruitful tree grows a giant peach. However, James soon finds himself on the journey of a lifetime when he takes a ride inside the giant peach with five unexpected friends. “James and the Giant Peach” teaches a true lesson on the meaning of family.

Emma Chassey, the acting and musical theatre senior who plays James, said the production reminds people of their youth.

“I hope the audience remembers the wonder and magic that the world brings to you when you are a child,” she said. “I also hope they have tons of fun and take home the message that family is more than just blood, it is love and sacrifice.”

“He is such a sweet and incredibly sensitive little boy who has had a hard start to his short life, and I truly enjoyed diving into his story,” she said.

“James and the Giant Peach” featured many different storytelling elements — including puppets.

“My favorite part of the whole process was getting to work with the puppets,” Emmy Farese, acting and musical theatre junior, said. “They are an amazing element that are crucial to the show.”

Each character in “James and the Giant Peach” has an important role and something valuable to bring to James and the audience. The show features five insect friends: Grasshopper, Spider, Ladybug, Earthworm and Centipede.

Farese, who plays Spider, said one of the most important things she learned is that every single person is important to bringing a story to life.

“Without even one person, the story would not be what it is,” Farese said.

“James and the Giant Peach” additionally featured two evil, larger than life aunts. By the name of Spiker and Sponge, these two aunts were obnoxious and majorly animated. Sponge, with hot pink hair and flashy makeup, featured many comical mannerisms. Trist Fishman, in his first year pursuing an MFA in musical theatre, took on the large role of Sponge.

“Sponge is such a character role, so it has been a blast coming up with all the beats, jokes, and gags that have made their way into the show,” he said.

Fishman said taking on such a unique role allowed to him to let loose and be silly.

“I learned how much of a goofball I really am,” he said. “Our director, Stephen Brotebeck, let me play around with different ideas and comedic bits. I have never thought of myself as a funny person, but this show has taught me how far I can stretch those comedy acting chops.”