The Daily Aztec • May 1, 2019 • https://thedailyaztec.com/94559/news/best-buddies-brews-coffee-stand-teaches-job-skills-to-students-with-disabilities/ 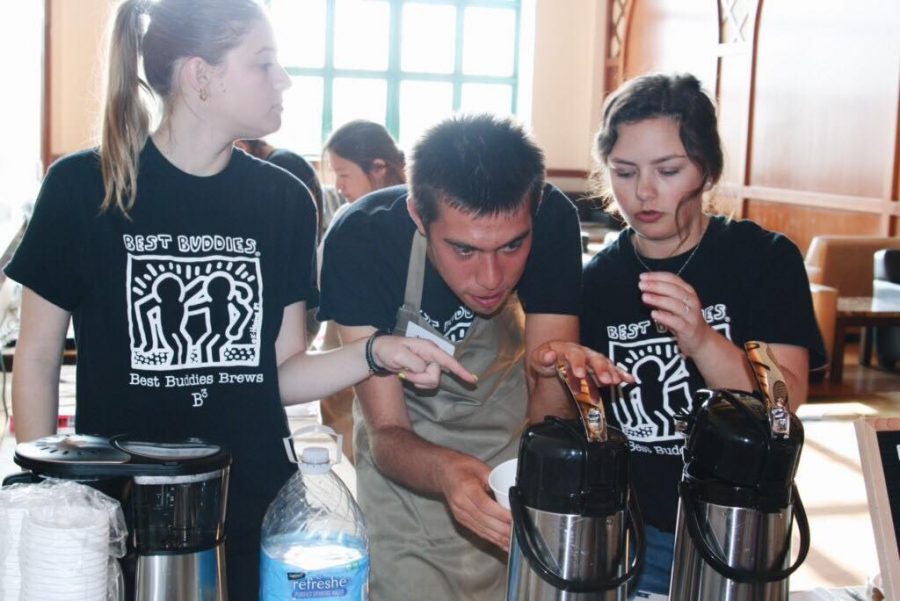 Best Buddies at San Diego State has started a new initiative, Best Buddies Brews, a pop-up coffee stand that focuses on giving those with disabilities the chance to learn valuable job skills and prove that they can overcome their disabilities.

According to Best Buddies website, Best Buddies is “the world’s largest organization dedicated to ending the social, physical and economic isolation of the 200 million people with intellectual and developmental disabilities.”

SDSU’s Best Buddies Brews was inspired by University of North Carolina at Chapel Hill’s chapter who started the pop-up coffee stand in 2018.

“University of North Carolina has a really successful Best Buddies chapter and I just saw one day on Facebook that they had started this initiative called Best Buddies Brews,” President of Best Buddies Julia Moluf said. “I reached out to their program coordinator, Jacklyn, and I got in contact with her and she was so willing to help me get one started at SDSU.”

The planning process for SDSU’s Best Buddies Brews began in October, with a GoFundMe raising over $2,700 to purchase supplies. After months of work, the first Best Buddies Brews took place at SDSU in late March. One has been held in the student union and another was held in Montezuma Hall.

The pop-up coffee stand serves drip, pour over and french press coffee from Haerfest Coffee in North Carolina with an exclusive Best Buddies blend. All the coffee is made and served by the buddies who are trying to learn valuable work skills to prove to people that they are deserving of a job, despite the low employment rate for people with disabilities.

“I think people take for granted how fulfilling it is to have a paying job, to get a paycheck and to feel like you are valued,” Moluf said. “We teach our buddies skills and hopefully they can utilize them and show people in society that they could hire people with a disability, not because it is the nice thing to do, but because these people are so capable and so deserving.”

So far, the stand has served over 100 cups of coffee to the SDSU community.

With the stand, members of Best Buddies hope that steps towards inclusion will be made with each cup of coffee served.

“Everyone seems to be really happy and everyone loves interacting with the buddies,” Best Buddies Event Coordinator Ella Holton-McCoy said. “Surprisingly, people don’t seem to mind waiting a little bit longer for their coffee which is really nice.”

The coffee has received high praise among the SDSU community who are willing to forgo their normal cup of Starbucks coffee to support the stand.

“The coffee from Best Buddies Brews is better than Starbucks for sure,” speech, language and hearing sciences junior Celine Minasian said.

“I would love for Best Buddies Brews to eventually just become an integrated part of campus,” Moluf said. “We could really change the climate of what it means to hire someone with a disability.”