The Daily Aztec • May 6, 2019 • https://thedailyaztec.com/94622/news/christian-onwuka-and-other-a-s-elects-officially-sworn-into-office/

Christian Onwuka and other A.S. elects officially sworn into office 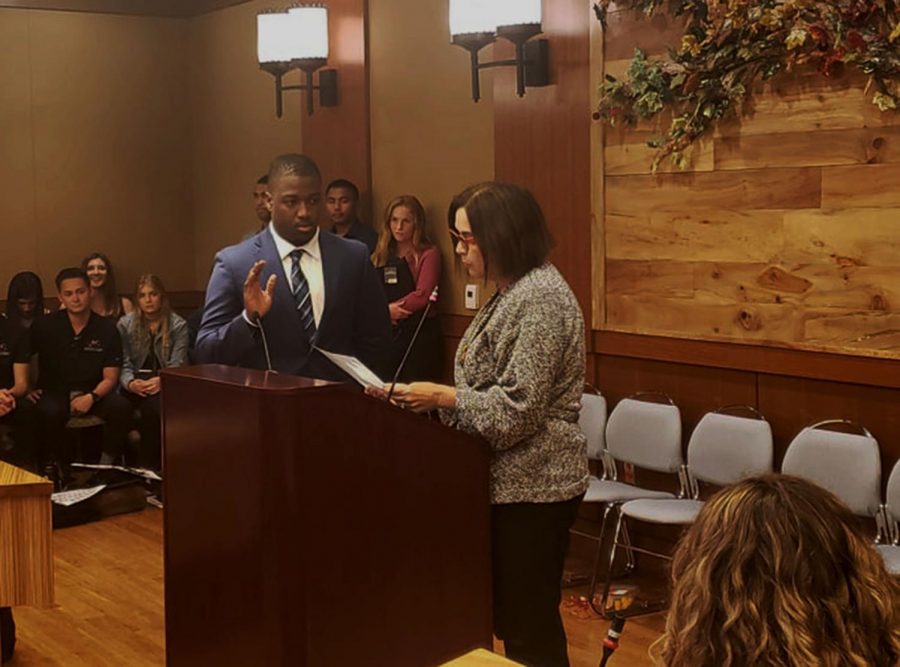 A.S. President-elect Christian Onwuka is sworn into office on May 1 by President Adela de la Torre.

“I think it was just definitely all surreal to me still, but it felt good to see the university president come and swear me in and that idea that she views me as somebody valuable,” Onwuka said after his inauguration.

Slated to serve for the 2019-20 academic year, Onwuka’s vision as A.S. President is expected to include outreach and representation for the different communities at SDSU.

Onwuka said he hopes to build off the work his predecessor Chris Thomas did in his year as A.S. president.

“(I want to) just continue to make sure voices are being represented from all communities on campus,” Onwuka said. “Chris Thomas did a great job this past year. I think he was really good at engaging with different students so I just want to continue that, but also take it a step further.”

The five newly sworn-in officials were all a part of the “Vote SDSU” slate that swept the five executive position races in the spring 2018 A.S. elections.

“I can’t even describe how close that we’ve gotten in the past few weeks, and they mean the world to me, and I can’t imagine doing next year without them,” Blaylock said.

Blaylock said the gender diversity among this year’s executive officers is one thing she is proud to be a part of, especially considering this year’s officers were all men.

“I’m thrilled to be able to be among such awesome, dedicated, driven, powerful women leaders,” Blaylock said. “Especially women of color.”

An area Scott said he would like to improve is the availability of what he called “high demand classes.”

“When it comes down to registering a lot of time you can’t get the classes which are crucial to your major,” he said. “I just want to make sure that every student at SDSU has the possibility to be able to graduate in four years and not have to spend additional resources to comeback an extra semester or a year.