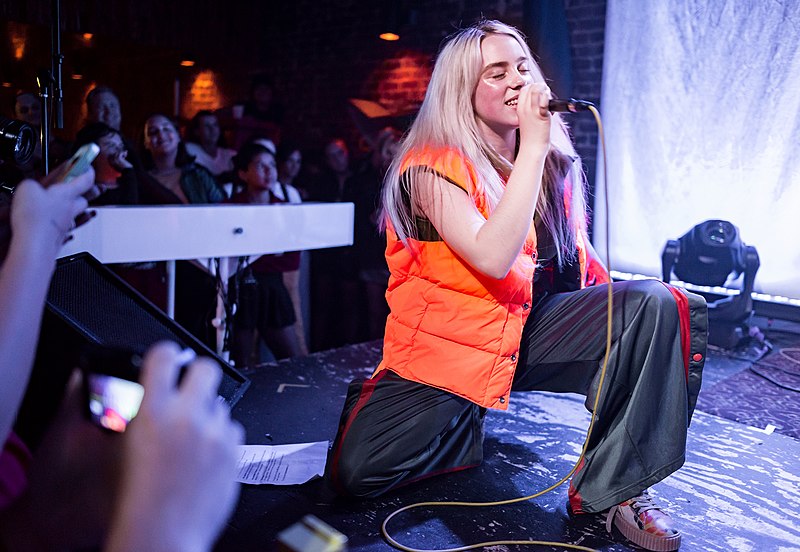 Pop breakthrough Billie Eilish will perform at the Open Air Theatre at SDSU on July 13.

Summertime is right around the corner, and with that comes a lot of artists stopping by San Diego and the rest of Southern California on their big summer tours. From country to rock to hip-hop and everything in between, San Diego will be a hotspot for concerts in summer 2019.

Here is a complete guide to all the best upcoming shows in San Diego this summer:

San Diego State’s very own Sitting On Stacy will be performing just after finals are over. The indie band has made quite a name for itself around Southern California.

The band is most known for its song, “Tied Hands,” but has also released an EP “Mel’s Neck of the Woods,” and an album, “Obsessed.”

Song You May Know: “Tied Hands”

Song You Should Listen To: “High on Life”

The country stars are stopping by the North Island Credit Amphitheatre, a popular spot for country shows in San Diego. The three-time-Grammy winner Brad Paisley is bringing along Chris Lane and Riley Green for his summer tour.

Songs You May Know: “Whiskey Lullaby,” “Beat This Summer”

Songs You Should Listen To: “My Miracle”

Father John Misty is known for four albums worth of vulnerable and poetic lyrics. His newest album, “God’s Favorite Customer” came out in 2018 and this will be his first tour since that release.

Songs You May Know: “Real Love Baby,” “Nancy From Now On”

Songs You Should Listen To: “The Songwriter,” “Total Entertainment Forever”

Sir Paul McCartney is coming to Petco Park this summer on his “Freshen Up” tour. McCartney released his newest album “Egypt Station” this past fall, which includes singles “Come On to Me” and “Fuh You.” The former Beatle also does not refrain from playing the Fab Four’s hits during his solo career.

Songs You May Know: “Band on the Run,” “Live and Let Die”

Songs You Should Listen To: “Let Me Roll It,” “Every Night”

The Coachella performer has been known for his collaborations with big names such as Halsey, Billie Eilish and John Mayer. His latest album, “Free Spirit” was recently released and will be leading his tour this summer.

Song You Should Listen To: “Outta My Head” ft. John Mayer

The hit-making singer-songwriter Shawn Mendes found his fame off the late app, Vine. Since then he has released three albums, with a brand new single released last week. Mendes’ charming composure and powerful vocals have attributed to his success.

Songs You May Know: “In My Blood,” “Stitches”

Songs You Should Listen To: “Fallin’ All In You,” “Where Were You in the Morning?”

Billie Eilish has blown up over the past year, becoming more successful with each day that passes. Eilish often takes a dark approach to her songwriting, but it offers music that is unlike anything else on the radio at the moment, which has created her an obsessive fandom.

Songs You May Know: “Bury a Friend,” “Lovely”

Songs You Should Listen To: “I Love You,” “Watch”

Cage the Elephant’s newest album “Social Cues” was released this last April. The album offers the authentic sound of the band while bringing a strong return from their past albums. The band will be touring with other renowned rock acts Beck and Spoon.

Songs You May Know: “Cigarette Daydreams,” “Ready to Let Go”

Songs You Should Listen To: “Social Cues,” “Sweetie Little Jean”

To close out summer, Kacey Musgraves will come to the Open Air Theatre at San Diego State. Musgraves has had a huge year for her music career — the country singer took home Album of the Year at this year’s Grammy Awards for her album “Golden Hour,” and performed at Coachella in April.

Songs You May Know: “Rainbow,” “Butterflies”

Song You Should Listen To: “Space Cowboy”

Thursday, May 23: New Kids on The Block, Salt-N-Pepa, Naughty By Nature, Tiffany, and Debbie Gibson at Viejas Arena

Thursday, May 23: Ocean Alley at The Casbah

Thursday, May 23: Festival De Musica Cubana 2019 at Humphreys Concert By the Bay

Saturday, June 22: America at Humphreys Concerts By the Bay