The Daily Aztec • May 8, 2019 • https://thedailyaztec.com/94711/showcase/local-san-diego-music-scene-gets-a-taste-of-cancel-culture/ 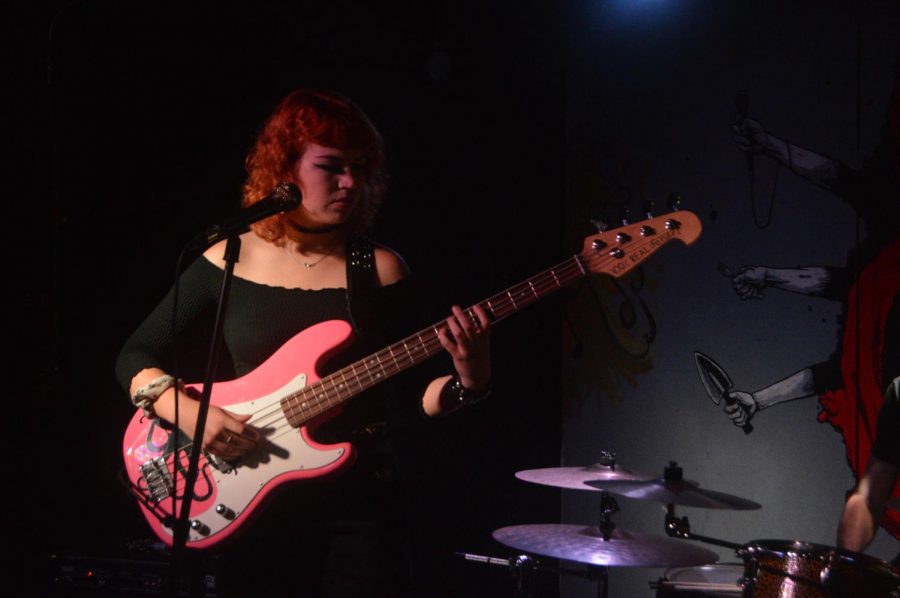 In 2018, NPR reported in a podcast that fans of the hardcore music scene in Richmond, Virginia, had taken it upon themselves to provide justice to victims of sexual assault perpetrated by musicians popular in the scene.

Using social media, the women of the Richmond scene held their abusers accountable, creating a moment of reckoning for bands and musicians who chose to look the other way.

The local rock music scene in San Diego is having a similar moment.

“You could ask any girl here, and they would have a story to tell,” Carley Fischer, the lead singer of San Diego punk band Creature Culture said after playing a set at the Che Cafe on April 19.

She said stories of guys in bands acting creepy with their female fans circulate around the local art scene  constantly, mostly via social media.

Sexualt assault is already a complex issue, but in the scene, Fischer said it takes on a completely different form. The reason, she explained, is the weird power complex some musicians get as soon as their band gets a taste of success.

“What’s simultaneously fantastic and dangerous about the scene is that it’s for everyone,” Fischer said. “Everyone includes naive young girls, and grown men in bands who are being put on pedestals. There have been countless cases of guys in their twenties taking advantage of high school-aged girls.”

Fischer mentioned a specific situation in which someone she had grown to admire in the scene, a 27-year-old singer in a band, was discovered to have sent inappropriate messages to a 15-year-old girl. Wanting to protect the privacy of the girl, Fischer did not name either the band nor the singer who sent the messages.

Taylor Goldstein, the guitarist for the band Subspecies, spoke of a similar situation in which the 21-year-old singer of a reasonably popular band – whom he asked to remain unnamed – was sending unsolicited nude photos to underage girls.

At first, Goldstein said the fallout from the accusation was intense. The band lost followers on Instagram, while at the same time several other bands, including Subspecies, made an effort to stop playing shows with them. However, he said loyalties run deep in the scene, especially since the community is so small. Despite several fans cancelling the musicians, others remained by the band’s side, claiming their music was just too good.

While this form of sexual harassment is rampant in the scene, there have also been incidents of outright sexual assault. Theater junior Paloma Carrillo shared her story, detailing the abuse she suffered at the hands of a local band member.

In December 2017 Carrillo and her friends went to see a locally well-known band – whom she chose not to disclose the name of –  play in Northridge. At the end of the night, Carrillo was separated from her friends and left without a ride back to where she was staying. A member of the band approached Carrillo and offered her a ride home with the band, since where she was staying was on the way to where they were headed. Carrillo said with no other option, she agreed.

“We were in the car, and he was talking to me, and we were just talking about music,” Carrillo said. “Then he took me to his house, and he is like ‘I need to get something. Can you come inside with me?’ and I was like ‘Oh, well why? I can just wait in the car.’ And he’s like, ‘No, no, no, no. I don’t want to leave you alone in my car.’”

Carrillo said she then left the car and went inside the band member’s house. When inside, he exposed himself to Carrillo and began to push himself onto her. Scared and unsure, Carrillo said at first she went along with it, but after realizing she did not feel comfortable she tried to push him off. This led him to become violent, smacking her across the face. She said the man continued to rape her throughout the night.

“After he was done, I was like, so can you take me home now? He said, ‘No,’ so I had to spend the night there, and he did it throughout the night. Then I just took myself home in the morning,” Carrillo said.

After that night, Carrillo told others who had gone to the show about the incident but said they had trouble believing her story since her abuser was well-liked and did not seem like a guy who would assault women.

“I came forward, and they were like, ‘He would never do that, his music doesn’t represent that. That’s not how he represents himself to his friends and his band,’” Carrillo said. “I was rejected for coming forward with it.”

It’s not uncommon for accusations of sexual assault or misconduct to be polarizing among fans. Just look at other artists like Woody Allen, XXXTentacion or Louis C.K. who, despite having been accused, and in some cases found guilty, of violence and misconduct, have maintained massive followings as well as formidable opposition to their work. While it is easy for people to tweet and hashtag their opposition to these celebrities’ actions,  the proximity of the local scene complicates things. Victims have close relationships with other fans who make excuses for abusers actions. Fischer, who is a survivor herself, said this is extremely devaluing.

“It’s so devaluing as a victim when people continue to go to these guy’s shows and listen to their music,” Fischer said.

However, in all three cases things began to noticeably change when survivors began to share their stories on social media.

“He got his name ran through the mud,” Carrillo said of her abuser. “A bunch of girls came forward, who were like 14 and 15, and they said he took them to his house, did those things, and forced them to spend the night. It was like the same situation.”

At one point, Carrillo said a Facebook group was created to spread the word of his abuse. The group has since been taken down, but the damage to his and the band’s reputation had already been done.

The band broke up, and Carillo’s assaulter deleted his Instagram, she said. A similar fate awaited the band Goldstein mentioned when news of the singer’s behavior was spread on Instagram.

The events that Goldstein and Carrillo describe are evidence that, while on a much smaller scale, the same Internet call-out culture that has brought down the likes of Kevin Spacey, Matt Lauer and Bill O’Reilly, is operating in the San Diego music scene.

Lisa Nakamura told the New York Times that cancel culture arose from a desire for control, compelling individuals to take matters into their own hands.

“Socially irredeemable things are said on platforms all the time,” Nakamura said. “Cancellation creates a culture of accountability which is not centralized and is haphazard, but needed to come into being.”

One has to wonder if canceling an artist or musician is the most effective way of holding them accountable.

The same New York Times article refers to a video in which Kimberly Foster, the founder and editor in chief of For Harriet, points out that isolating people does not undo the trauma they might have caused others.

“When we’re angry it’s normal for us to want retribution, to seek out revenge,” Foster says in the video. “We’re socialized in a culture that tells that’s the right thing to do, but punishment is not justice.”

Already, victims of cancel culture have appeared to be able to weather the storm. Logan Paul still makes videos, Kanye still gets to do his “Sunday Service” at Coachella and people still play XXXTentacion’s music.

The reality is when people denounce a celebrity on social media, it may be as simple as posting their opinion with a hashtag and tapping the “unfollow” button. But, in a small, tight-knit community like the San Diego music scene where loyalties run deep, it is not so simple.

However, Fischer expressed her hope that the scene is changing.

“There are more girl bands in San Diego than ever, as far as I know,” Fischer said. “I think that’s really making a difference. We want our voices to be heard and they’re starting to be heard. We’re helping each other be louder and giving each other a platform.”

Fischer and her band Creature Culture say it best in their song “Queen of the Music Scene.”

“There’s nothing more dangerous than a smart girl who knows she’s got a hot body,” Fischer sings in the song. “She came out kicking and screaming, ‘I will not listen to the man, I know who I am.’All the silly boys in the metal bands that all sound the same think they’re playing her, but they don’t see. She’s queen of the music scene.”