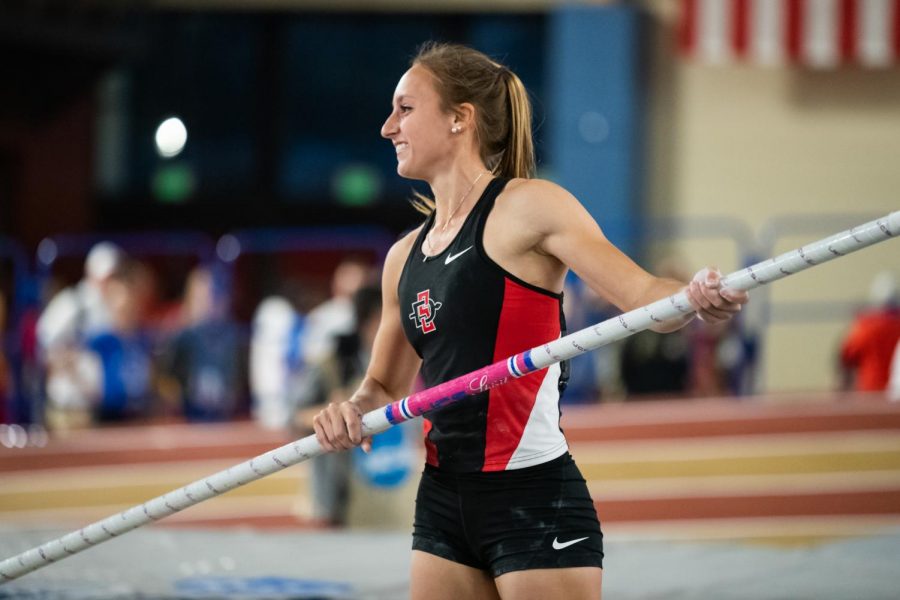 “(She has) the self-discipline to follow through and work on the small aspects of her craft, just being a true student of the sport,” Fox said.

Draxler established herself as one of the top pole vaulters in SDSU’s history after capturing a silver medal in the NCAA Outdoor Championships in June following a 14.8-foot pole vault performance, tying her own school record.

In March, Draxler cleared 14.96 feet in the 2019 NCAA Indoor Track and Field Championships – breaking her own school record and setting a new Mountain West Conference record.

Draxler said that was her most memorable moment as an Aztec.

“It was so crazy; I don’t even know how many bars that I jumped because the competition just felt so long,” Draxler said. “It was so much fun and so exciting.”

Fox said her accomplishments during her time as an Aztec have been unmatched.

“She was the most successful San Diego State pole vaulter to date we’ve had as far as indoor and outdoor placement, scoring points in conference and winning four indoor championships,” Fox said. “Nobody else has done that.”

As a senior, Draxler was named a first-team All-American following both indoor and outdoor seasons by the U.S. Track & Field and Cross Country Coaches Association. The Association also honored Draxler as 2019 West Region Field Athlete of the Year.

Oh, and Draxler runs, too.

“She clearly has the tools to be an elite athlete because of the innate speed and athleticism to do multiple events,” Fox said. “She took that to the next level.”

Draxler competed in her first post-collegiate competition in the USA Outdoor Track and Field Championships on July 25 through 28 at Drake University in Des Moines, Iowa.

SDSU 2015 graduates Kristen Brown and Kortney Ross also competed against Draxler in the pole vault. Brown tied for sixth and Ross was listed as “no height.”

Draxler said participating in the championships with her two former college teammates feels like déjà vu.

“It’s great for our program,” Draxler said. “Just to be there with them, it almost feels like old times again, my freshman year competing with them.”

Draxler hopes to be one of three Americans – and possibly Aztecs – to qualify for the 2020 Tokyo Summer Olympics.

In terms of preparation, Draxler is in the process of adjusting from a student-athlete to a professional.

“For me, going forward in my training is more personalized to exactly what I need,” Draxler said. “Just being motivated on my own to go out and get my workouts done because you don’t have a coach telling you what time you have to be at practice and all that kind of stuff like you do in college.”

Fox said Draxler’s story can be an example to her successors.

“She has shown future Aztecs that this is all possible to do and accomplish here,” Fox said. “Our returning veterans and our incoming pole vaulters have this confidence to know, ‘Hey, I can be successful here at State, and I can do it because she’s done it, and she’s paved the way.’”