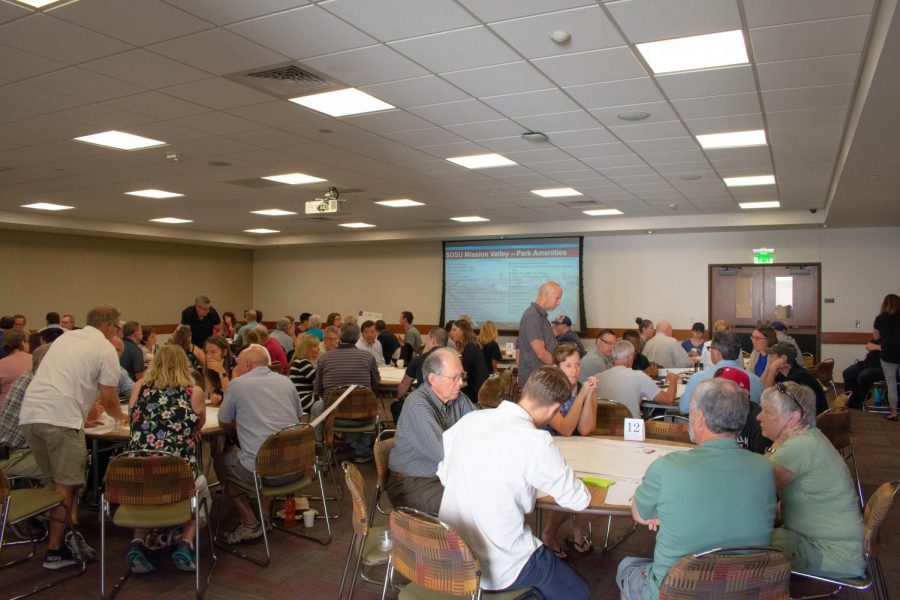 San Diego State hosted its first public design workshop on July 27 to receive feedback on plans for a proposed river park at the site of the university’s Mission Valley expansion.

Members of the public were invited to discuss key principles and amenities to guide the design and construction of a river park and other open spaces. In addition to university leaders, representatives from Clark Construction Group, Project Design Consultants and Schmidt Design Group were in attendance to gather feedback from attendees.

SDSU Director of Planning Laura Shinn said the university plans to allocate around 80 acres throughout the site for parks and open spaces for the community to use. This includes a river park, active recreational fields and other passive park open spaces adjacent to both the river and development.

Members of the public raised the importance of sustainability — from the inclusion of native, drought-resistant landscaping to protecting water quality — in the river park design. Attendees also addressed the need to incorporate multi-use recreational facilities for flexibility, maximizing alternative modes of transportation, accessibility for both the public and those with disabilities and connectivity to existing Mission Valley parkland as key priorities for consideration.

Flood protection for the land adjacent to the river was also a focus of discussion. Shinn said the university’s design of open spaces accounts for the possibility of riverbed flooding. With the inclusion of parkland on the edge of the site near the San Diego River, the design recreates a floodplain to manage and mitigate the effects of flooding.

“There will be fields in that parkland, and those fields will occasionally flood, but the water will go away much faster than it would sitting on a parking lot,” Shinn said.

According to Shinn, the university’s larger design plans for the site include space for education, mixed-use residential and retail development, along with four miles of hiking and biking trails throughout the campus.

Associated Students President Christian Onwuka attended the event and said the workshop was important for allowing stakeholders, from students and alumni to members of the community, to share their thoughts on the development. Onwuka said his focus is to promote the river park as an opportunity for academic research and to ensure recreation is maximized for SDSU students.

“I came to make sure our students are taken care of,” Onwuka said. “Our emphasis in student government is to advocate on behalf of students for a project as monumental as SDSU Mission Valley.”

Bob Thomas, another workshop attendee, said university plans should keep homeless residents in mind, many of whom currently reside in Mission Valley.

“We’re behind the university and support the addition, but we just want to make sure they consider the homeless people who live there,” Thomas said.