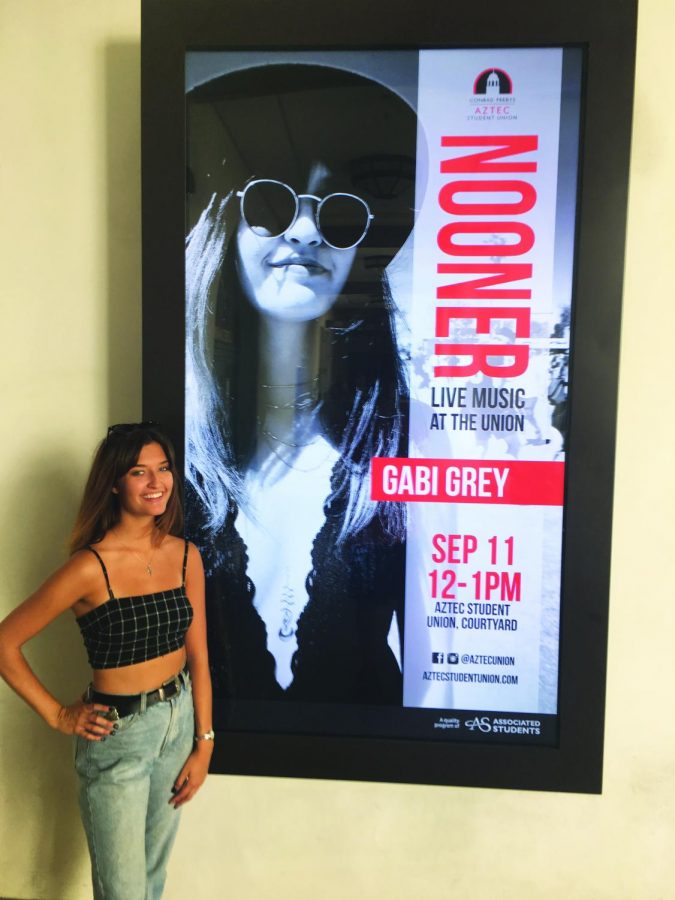 Budihas stands in front of her sign in the Aztec Student Union where she will be performing live on September 11.

The concert will be held on Sept. 11 in the Conrad Prebys Aztec Student Union.

“It’s kind of hard to find the first Nooner because it’s summer and no one is in school yet,” Rooney said. “So she was one of the first options. She went to all the weekly meetings. We felt like she was a good opener for the semester.”

Budihas writes and produces melodic Electronic Dance Music under the stage name Gabi Grey. She is also a second year chair for the Operations Committee of Associated Students Union Board.

Her concert will consist of original songs and acoustic covers performed on the piano. Her ultimate passion, however, is EDM.

“I always liked dance music and electronic music, but I never thought I’d get into making it,” Budihas said. “I learned about producing electronic music after my sophomore year when I went to Coachella and saw a set that kind of changed my life, and I remember thinking ‘That’s what I want to do for the rest of my life.’”

The artist who inspired her career in EDM is Illenium, who is one of many artists she looks up to now. Budihas said her favorite artists include Alison Wonderland, ODESZA, RL Grime, SLANDER and NGHTMRE, but that she could name fifty more. Budihas’s musical career started much earlier than her sophomore year at SDSU. She said she’s always been musically inclined, but it wasn’t until high school that she began to take music seriously. She was enrolled in a performing arts program in high school where she met a lot of songwriters.

At 15, she taught herself how to play piano, began writing her own music and taking vocal lessons. She said her first songs were really cheesy and sometimes confused her parents with their focus on love and romance.

“Most of my songs are actually all sad,” Budihas said. “I’ve always written about love interests and it’s funny because, especially in high school, I didn’t date anyone and my parents were like ‘Where did you get all these feelings?’”

Her songwriting process varies. Sometimes she hears a melody in her head and either records it on her phone or goes to her piano to play it out.

Other times she hears a song that inspires her to write something along the same lines, or she tries to bring an electronic vibe to older songs.

“They’re kind of like poems,” she said. “The genre that I’m trying to produce is basically, I would call it melodic EDM. Future bass I guess? Lyrical, melodic, electronic music that has the singer-songwriter vibe with drops and synths. You can dance to it, but it’s feelsy, like really in your feels.”

A.S. program’s coordinator, Veronica Perondi, is one of many who encouraged Budihas to perform. Perondi said the Nooner concerts are a key way SDSU highlights student talent.

“The Nooner concerts are put on by the Music and Entertainment Committee,” Perondi said. “The main reason for them is to provide a fun and entertaining environment in the Aztec Student Union.”

“It’s a fun experience. Students can make music in their dorm space with their friends, but to have the opportunity to be in a more professional setting and to be around people excited to see them perform is what we like to see.”

Artists or bands who participate in Open Mic night get a shot at the Nooner performance. The Open Mic Night is a competition for anybody who wants to join. After the live shows, judges pick their favorite performance and award the band or artist with first place.The first place winnerthen goes to perform the next Nooner. However, there wasn’t an Open Mic Night competition this time because the Nooner is at the beginning of school.

You can find more of Budihas’s music on SoundCloud as gabi grey and on Instagram at @gabrielle_budihas.

Juniper Perkins is a sophomore studying journalism and media studies.