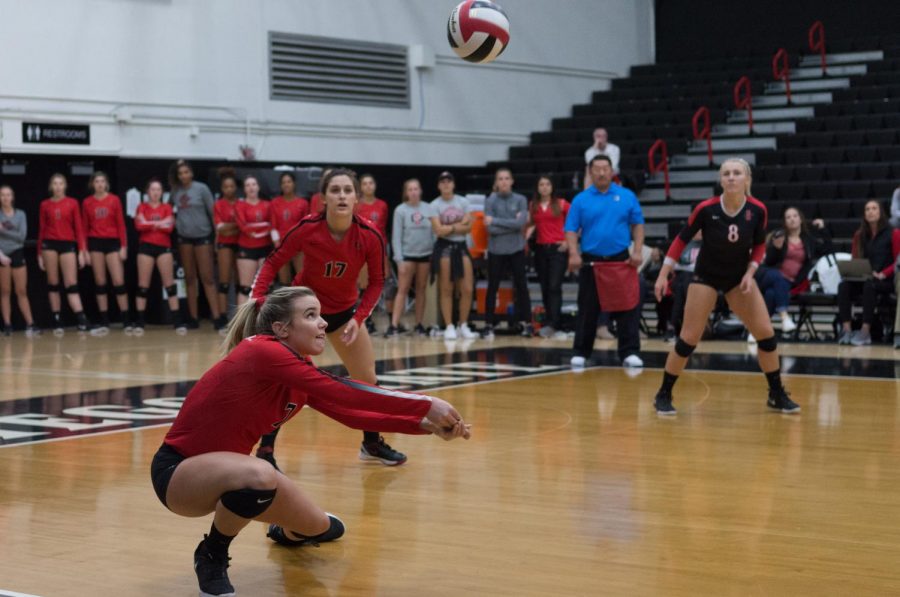 Then-junior outside hitter Hannah Turnlund looks to put the ball in play during the Aztecs four-set victory over Nevada on Nov. 15 at Peterson Gym.

San Diego State volleyball is a few days away from the beginning the season on the road in Fort Myers, Fla.

Head coach Deitre Collins-Parker said their approach has changed with the loss of some key players entering the year.

“We have a completely different attitude coming into the gym,” Collins-Parker said. “Every single practice, they have worked hard, they’ve wanted to get better and they have enjoyed playing the game.”

Despite losing the all-time block assists leader Deja Harris, who plays professionally in Sweden, and outside hitter Ashlynn Dunbar, who recorded 49 service aces last season and transferred to Oklahoma, the team has 13 players returning, and it gives Collins-Parker comfort when need be.

“Maturity and experience is always a positive,” she said. “We’ve lost some big personalities and we’re seeing new people emerge as leaders and that’s awesome.”

A couple players who have transpired into leaders this season are senior outside hitter Hannah Turnlund and senior middle blocker Tamia Reeves.

Collins-Parker identified Turnlund and Reeves as four-year players with a moxie that has stemmed down to their teammates.

“They have really stepped up as leaders,” Collins-Parker said. “They’re leading the charge with the attitude that everyone has in the gym.”

Reeves said the returning players give the team more experience heading into the season with the help of the new players coming to SDSU.

“(The depth) is great for the basics of knowing plays and working together,” Reeves said. “The newcomers are adding a great aspect we haven’t had as much of in the past. We are getting balls up that we haven’t had before, and we’re being able to play the bigs.”

The 6-foot-1 middle blocker said the four freshmen and two transfers have added a unique dynamic to the team.

“(The newcomers) have brought a new aspect to the team,” Reeves said. “We’re trying new things that we haven’t done before in getting new balls up and it is more fun to play with them.”

As the freshmen are adjusting to playing Aztec volleyball, the returners remember winning only 10 games last season.

Turnlund said it will give the team the ambition they need to be more successful this season.

“We know last season wasn’t the max potential that could’ve been at and could’ve played at,” she said. “So, we’re all eager to win this year.”

Those 10 wins last season have given the team motivation this year and the coaches have seen it through the position battles that have ensued during practice.

“(Sophomore outside hitter Victoria O’Sullivan) really emerged this spring, but now she is seeing a freshman that is athletic like her, so she’s having to step up her game,” Collins-Parker said.

In addition, Collins-Parker said the defensive specialist/libero position has constantly battled every year, but enjoys to see the fight and pride in the players.

“That’s what makes the competition fun,” she said. “The level is equal across the net, and you’re having to find a way to stand out.”

The Scarlet and Black opens the season on Aug. 30 at the Florida Gulf Coast Invitational, and their first home match is on Sept. 6 at 6 p.m. against West Virginia at Peterson Gym, part of the SDSU/USD Invitational.