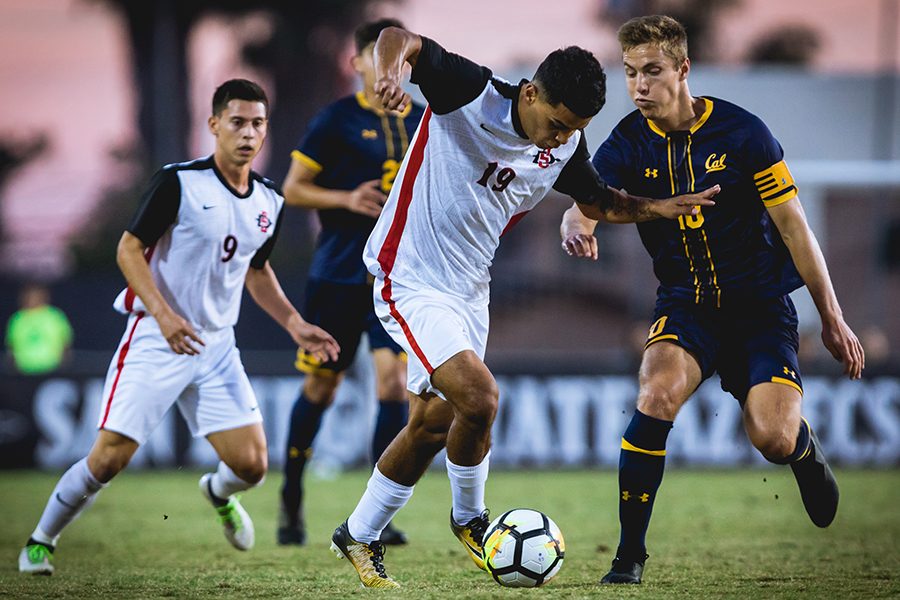 Damian German fights for the ball during the Aztecs' 2-0 loss to UC Berkeley on Nov. 4, 2018 at the SDSU Sports Deck.

San Diego State men’s soccer came away with one point following its 1-1 tie against UCSD on Aug. 24 at the SDSU Sportsdeck.

The Aztecs were unable to seal a victory in their second exhibition game prior to the season kicking off next week.

SDSU lost their opening exhibition, 3-1, against UC Irvine back on Aug. 19.

Despite not getting a winning result, SDSU still had positive takeaways from the match.

“Much better team performance tonight,” head coach Lev Kirshner said. “We had a better grasp of what we’re trying to do on all phases.”

A re-polished midfield displayed the oncoming play of sophomore midfielder Tristan Weber, who recently transferred from the University of Portland.

Weber sparked the opening goal three minutes into the match after providing a cross that connected with senior midfielder Emil Kjellker’s foot to slot the ball into the back of the net.

“It was a great play from all of us,” Weber said. “I felt that we were moving the ball really well side to side and we found a pocket of space out wide.”

The last time Kjellker scored was against the Anteaters back on Sept. 9 of the 2018 season.

“It’s always great to score,” Kjellker said. “I knew Tristan was going to put in a perfect ball, so I just made my run.”

Minutes before halftime, the Tritons caught the Aztecs off guard and managed to level the score.

A mishandled ball allowed the visitors to exchange a few passes and slip past the Aztecs’ defensive backline.

UCSD junior forward Brett Jones found a pocket of space on the right wing and fired a shot that squeezed through freshman goalkeeper Tetsuya Kadono’s legs.

The Aztecs were aggressive on attack by outshooting their opponents 12-5, yet failed to find another score before time expired.

“We have to score more goals in our matches,” Kjellker said. “We could’ve easily been up two, three goals in the first half.”

Next up for the Aztecs is a matchup against San Diego on Aug. 30 at the SDSU Sports Deck.