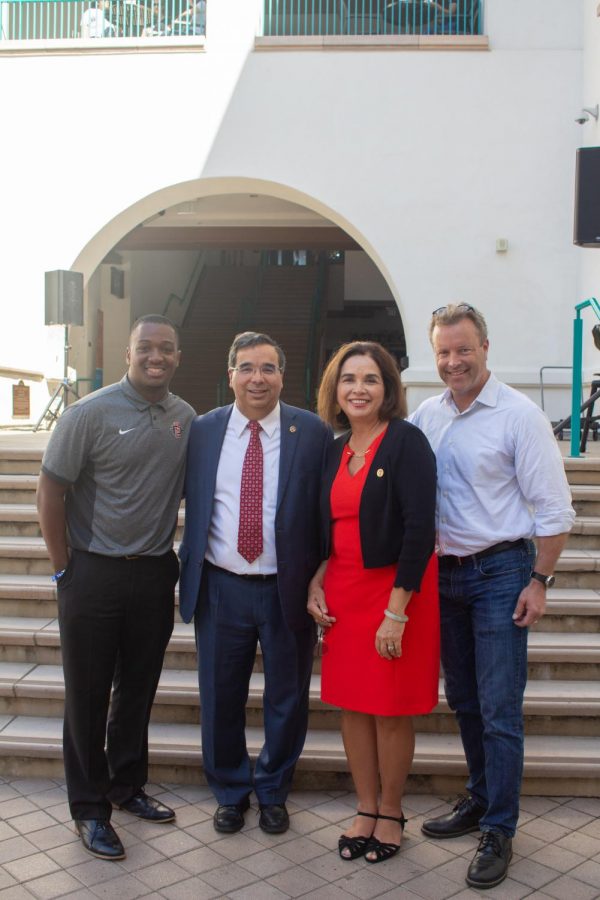 Dr. Ochoa was announced as SDSU’s new provost and senior vice president in a campus-wide email sent by President Adela de la Torre on April 8. He began his tenure at SDSU on July 2.

Dr. Ochoa told the crowd about his vision for SDSU.

“My vision is that we become a student-centered research institution that transforms the lives of students and the communities that we serve,” Dr. Ochoa said. “But I use the words ‘student-centered’ first because we are here to serve students first, to transform their lives so that our communities can be the beneficiaries of the hard work that we do.”

“In many ways, I know that (Dr. Ochoa) will also, because of his own unique background, provide an important perspective of where we are situated as a campus that spans the border of California-from the Imperial Valley to our county,” de la Torre said. “This is really a significant time for us to really have the kind of leadership to fully appreciate our position as (California State University’s) and California’s leading university on the U.S.-Mexico border.”

As members of the SDSU community arrived at the reception, they were greeted with ice cream and drinks.

“Bringing over 20 years of experience to this campus is going to be great,” said Onwuka. “Us being a Hispanic-serving institution and his upbringing, as well as his understanding and knowledge of the demographics, he is going to be extremely effective. He is open to change, open to criticism and open to hearing students.”

The reception concluded with Dr. Ochoa looking towards the future of SDSU.

“I’m truly very excited and optimistic about our future,” Dr. Ochoa said. “I really genuinely believe that through our collective efforts, that SDSU can be the premier institution along the border.”