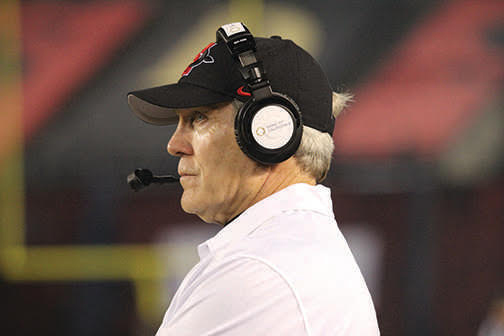 Head coach Rocky Long stands on the sideline during an SDSU football game.

When a San Diego State football player walks in the Fowler Athletic Center, there are two things he cannot be spotted with.

While those two things might seem minor, that can still be considered a sacrifice in the minds of a lot of young college men – especially when it comes to earrings.

It’s everywhere in the NFL.

You see superstar players like Odell Beckham Jr. and Julio Jones flaunt stylish earrings both on and off the field.

Even in college, guys like Oklahoma quarterback Jalen Hurts and Alabama quarterback Tua Tagovailoa can be seen rocking a nice pair of hoops during an interview on television.

In a time when these young men are scrolling through their social media feeds seeing photos of countless athletes flex with things like designer clothes, trendy hats or flashy earrings, it can potentially be tempting to want to emulate those players’ swagger.

But that would not fly by in Aztecs head coach Rocky Long’s program.

Long has a rule for his players on how to present themselves for them to prove they put the team first.

“When we’re together in a team function – which is practice, travel, meetings, anything that is a legitimate team function – we have certain rules about how they can dress and how they have to act,” Long said. “They give up some of their person freedoms to prove they want to be on the team bad enough.”

Even old high school gear is not allowed because it can separate that individual from the collective group.

Occasionally, one freshman will accidentally wear his old high school gear. Since the rule is not set in stone like the hats and earrings restriction, one of the veteran players or coaches will just remind the player to not wear apparel from high school next time.

Long said the main goal for these rules is to get his players to sacrifice.

“It has nothing to do with anything other than they’re willing to give up something to be on the team,” he said.

A plethora of SDSU football players are on board with these rules, including junior offensive lineman Keith Ismael who said that small sacrifice carries onto the football field.

Senior running back Juwan Washington also said the rules are a small sacrifice to make for the team.

Football is the ultimate team game. It’s all about giving up something for the greater good of the team en route to winning. If doing small things like taking off a piece of jewelry or hat can help unify and teach guys how to sacrifice, Long sure hopes that type of unity within his team carries onto the football field.