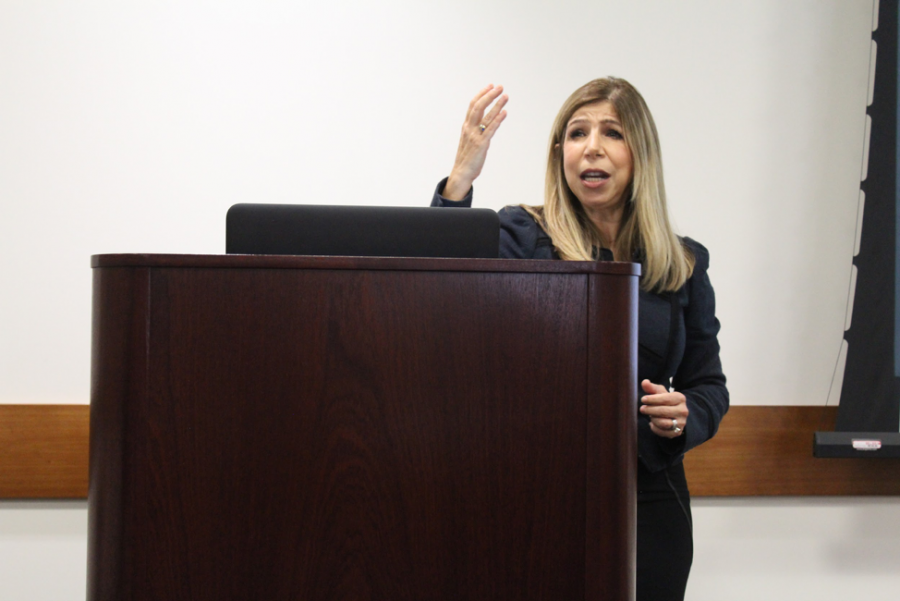 The nationwide discussion against fentanyl-induced deaths came to San Diego State in a joint presentation with the San Diego County District Attorney on Sept. 5. The presentation aimed to decrease the amount of fentanyl-related deaths in San Diego.

“Fentanyl deaths are on the rise in San Diego County,” Stephan said. “Fentanyl is the most powerful killer drug that we have out there. The drug dealers, in order to cut their costs, are lacing other drugs with a little bit of of fentanyl, and that fentanyl dose is causing many, many deaths.”

“Fentanyl is a synthetic opioid. It is man-made, which means it’s cheap,” Stephan said. “It can be duplicated, and it can be produced and reproduced, and that’s why it’s really spreading.”

The San Diego District Attorney’s Office has charged the first homocide murder based on the distribution of fentanyl. She said, given the substance is a poison, knowingly selling it is consiered murder.

Stephan gave the analogy of shaking salt on your food. An amount of fentanyl that small could be a fatal dose.

San Diego State is working to address the epidemic at home. Stephanie Waits Galia, director of Well-Being and Health Promotion, shared how SDSU is combating the issue through an intervention campaign. The university also recently received a grant for Narcan, a drug that, in an emergency situation, can save somebody’s life in the case of an opioid overdose

Since spring 2019, the university has kept nearly 200 doses available on campus for students at a discounted price, according to Galia.

In order to get the medication, one must contact Well-Being and Health Promotion department to set up an appointment. They will walk each student through the warning signs of opioid overdose, teach them how to monitor Narcan and share additional details about the newly acquired medication.

“If you’re worried about yourself, someone you care about, people in your household and if you’re hosting parties, that can be a really good reason to have this on hand,” Waits Galia said. “We’re really lucky that we were able to obtain quite a few doses from this one grant. We’ll be looking for further grant opportunities because we want to offer this more broadly to our student body.”

The San Diego County District Attorney’s Office is working with federal partners such as Health and Human Services and the community to create a three-sided approach to combating fentanyl.

“One is based on stopping the dealers, the second is protection of the ones who become addicted making sure there is treatment for them and then the third and the best one is prevention,” Stephan said. “Most of these addictions begin as prescribed pills by doctors.”

Jeff Lazar, the deputy district attorney who is signed to the major narcotics division, also spoke.

His mantra: “One pill can kill.”

“Fentanyl is everywhere,” Lazar said. “We’re seeing it in cocaine, xanax and ecstasy. The most typical medium in which fentanyl is disguised is an oxycodone pill. These are produced en masse in Mexico and trafficked across our border, and they hit the streets of San Diego hard.”

Every SDSU University Police officer carries two doses of Narcan and has been trained on the subject. Well-Being and Health Promotion looks to ramp up their marketing of Narcan and the program around SDSU this month, Waits Galia said.

“We will be following this up with a larger awareness campaign on campus to reach the rest of the student body and staff and faculty,” Waits Galia said. “We are trying to work with not just the awareness and prevention side, but then also some of the death prevention and reaction to overdose.”