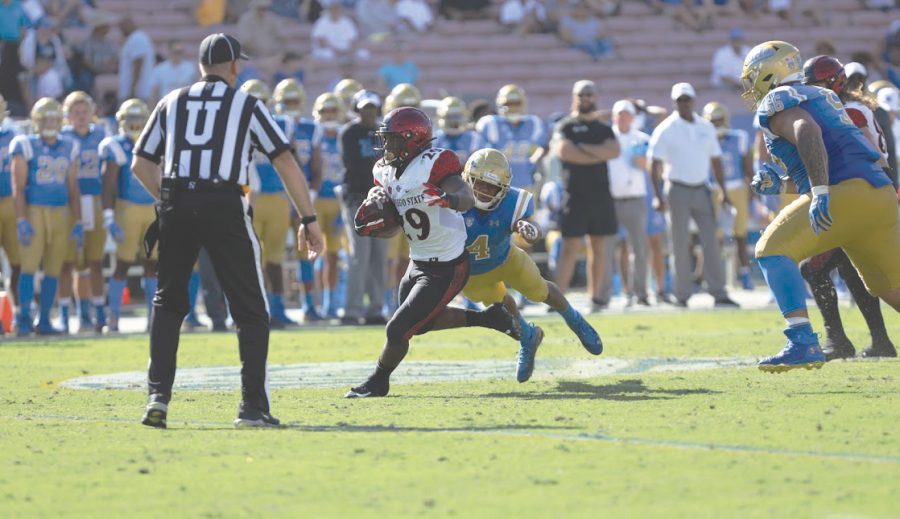 Senior running back Juwan Washington carries the ball during the Aztecs’ 23-14 victory over UCLA on Sept. 7 at the Rose Bowl in Pasadena.

The Aggies (0-2), an independent FBS school, are coming off consecutive losses to No. 20 Washington State and No. 2 Alabama.

Head coach Rocky Long said the matchup will be tough for the Aztecs (2-0) in terms of location and crowd environment.

Like SDSU, New Mexico State has two touchdowns in as many games.

Aggies sophomore quarterback Josh Adkins has thrown for 366 yards, a touchdown and three interceptions so far this season, adding a rushing touchdown against the Cougars on Aug. 31.

New Mexico State seniors Christian Gibson and Jason Huntley have split touches in the ground game, but the Aggies have only been able to muster 3.4 yards per carry through two games.

Considering the level of potential NFL talent on a storied program like Alabama, Long said New Mexico State was unable to keep up with the Crimson Tide.

“Alabama did dominate on both sides of the ball, and when you watch Alabama on film, you understand why,” Long said. “It’s like a AAA team. They start 22 guys, and all 22 are going to be playing in the NFL someday, so they’re kind of special.”

Long, however, said Washington State’s defense struggled against the Aggies – posing a challenge for his own defense this weekend.

“Washington State’s defense did not stop New Mexico State,” Long said. “They fumbled twice going into the end zone. They probably should have scored 28 points against Washington State.”

Despite the Aggies losing their first two games by 51 and 52 points, respectively, senior defensive back Kyree Woods said it’s not necessarily hard to prepare for an opponent that has already been blown out by two top-25 programs.

“It’s not really difficult, we just have to prepare the right way,” Woods said. “They have athletes just like we do, and we can’t take them lightly because (Long) always preaches that any team can be beat any Saturday.”

In order for the Scarlet and Black to have success, they must emulate their performance against UCLA when the Aztecs bolstered 373 yards on offense – improving upon the 238 total yards they recorded against Weber State.

Long said SDSU had its best showing through the air in at least three years.

Senior quarterback Ryan Agnew, who had one of his best showings in an SDSU uniform, was helped by sophomore wide receiver Kobe Smith, who hauled in a career-high seven catches for 131 yards and a touchdown.

It was the best performance by an SDSU wide receiver since Fred Trevillion, who had four catches for 189 yards and two touchdowns last November against Fresno State.

Agnew said he was not shocked to see Smith have a career day and hopes he can continue to have success against the Aggies.

Coming into week three, Agnew is hoping the Aztecs ride momentum from their win against the Bruins.

“We improved on everything (against UCLA),” Agnew said. “Watching the film yesterday, we saw there’s a lot more room for improvement. Just because we had a big win doesn’t mean we’re gonna stop there.”