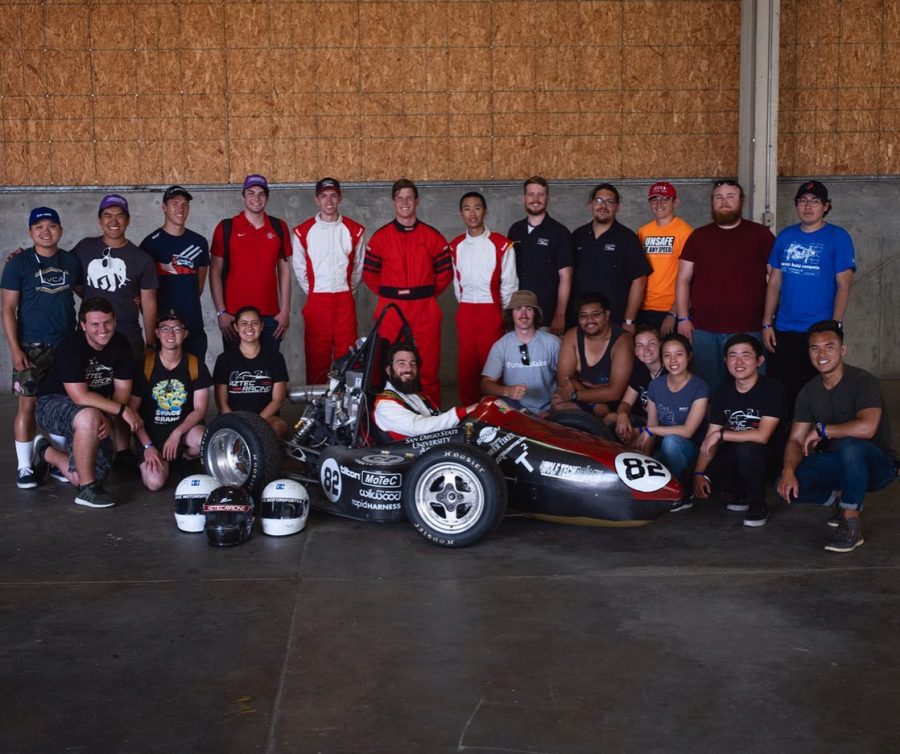 Aztec Racing is looking to improve this year after placing 28th out of 76 teams at the annual Formula Society of Automotive Engineers in June.

San Diego State’s Aztec Racing team is looking to improve this year after placing 28th out of 76 teams at the annual Formula Society of Automotive Engineers in June, the team’s best finish since the team was established in 1994.

Aztec Racing is a student-run organization where members apply their knowledge from the classroom and apply it to a real-life situation by building an open-wheel race car.

According to the Aztec Racing website, due to limited resources, loose organization and low interest, the team was not initially popular on SDSU’s campus. However, the team gained strength in 2008 when it became a recognized student organization on SDSU’s campus as a collegiate branch of Society of Automotive Engineers International.

Despite the team’s initial setbacks, in its comeback year, Aztec Racing received the SAE Perseverance Award in 2008 and then placed 28th in 2019. This year, the team’s goal is to place in the top 20.

“With the 28th place finish, we figured out our competing formula,” said Gregory Essayan, former engine lead and chief engineer for the club. “Now, the goal is to optimize it. We want to optimize the design of the car, keep its reliability and improve on the winning formula.”

The season for Aztec Racing begins in the summer, where members collaborate and decide on the design for the open-wheel race car. During the school year, Aztec Racing team members are manufacturing and perfecting the car to compete at the Formula SAE, hosted by the Society of Automotive Engineers and held annually in Lincoln, Nebraska, in June.

“We use a motorcycle engine and then everything else is student designed and built on campus,” said President of Aztec Racing Dani Phan. “The purpose of the competition is to test our performance of the car and to see the feasibility of mass production.”

The competition in Nebraska is one of two Formula SAE competitions in the United States, with collegiate racing teams travelling from all over the country to participate and attend.

This past summer, the team was able to compete in all the events in the competition, a feat that has only happened twice since the reestablishment in 2008.

This year, the team is looking forward to building upon their 28th place standing, finding that the formula to success lies in not trying something new like the previous years, but building upon past success.

“Last year, we simplified our design down and that really helped with our success,” Phan said. “This year we really want to work on making our car more efficient.”

Aztec Racing heavily relies on the Student Success Fee for funding. However, last year, when they did not receive SSF funding, the team had to fundraise and collect money from sponsors. The cost of building a car from scratch usually costs the team between $35,000 and $40,000.

Each member of the Aztec Racing Formula team gets hands-on experience, taking the knowledge learned in the classroom and applying it to building the car. For most members of the team, the real-life experience they receive is priceless.

“We like to pride ourselves on the experience that we give out to students,” Phan said. “You take the skills that you would learn in class, but then you get to actually apply it to real-life.”

In addition, members from Aztec Racing are able to make countless connections, which can help them with further down the road.

“I think the biggest thing you can get from Aztec Racing is not just the hands-on experience but also the networking that you can do,” said Chief Engineer Austin Hoang. “You can network with teams across the country and even from Germany, Brazil or Japan. It’s been such a good opportunity.”

Meetings for Aztec Racing are held in EIS-108.