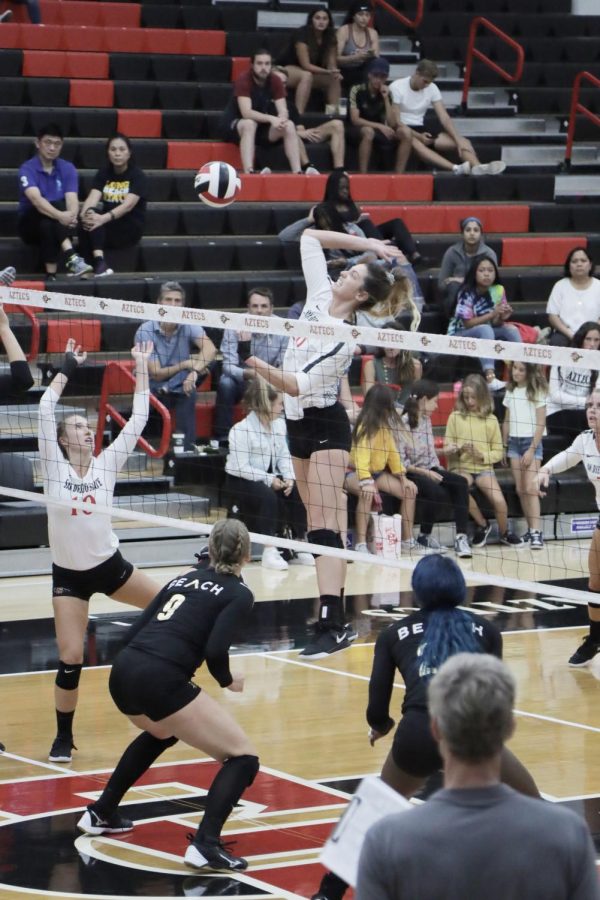 Junior outside hitter Lexie Hamrick goes up for the kill during the Aztecs’ 3-1 win over Long Beach State on Sept. 19 at Peterson Gym.

San Diego State women’s volleyball junior outside hitter Lexie Hamrick came into this season trying to earn her way into a starting spot.

Both offensively and defensively, Hamrick is piling up the stats.

When the Aztecs faced Long Beach State on Sept. 19, she had eight kills, recorded 11.5 points and ended the night executing 40% on her attacks. Defensively, she got five block assists and had one of the team’s three solo blocks against the 49ers.

On the season, Hamrick has eight solo blocks, which is tied for second in the Mountain West Conference.

To add even more, Hamrick currently leads SDSU and ranks No. 10 in the conference for total blocks (37).

Hamrick, who stands at 6-foot-3, said she uses her length to her advantage but also works on reading the opposition to time her jumps right and complete the block.

“My height definitely helps,” she said. “Understanding how to watch the hitter and where she is going also helps.”

The Louisville, Ky. native is tied for third on the team in kills (76) and has a 0.97 blocks per set percentage, which leads the squad.

Head coach Deitre Collins-Parker said she has seen Hamrick’s confidence grow since their return from Phoenix in the GCU invitational and believes that she can become a great player.

“She has struggled in confidence after (the GCU Invitational) and got back into the game – she is still working things out,” Collins-Parker said. “As she continues to develop, she is going to be a dominant player.”

Hamrick, said she attributes her play to Collins-Parker, who was a two-time national collegiate player of the year playing middle blocker.

“Our coach was a middle (blocker) for her whole life, and I have never had a middle (blocker as a) coach before,” Hamrick said. “There is so much emphasis on what I can be doing to help the team and how I should be doing this through the ways she has taught me (to lead me to) having the most success.”

This season, the team’s identity has been relying on each other and getting better.

They are only behind the defending conference champions, Colorado State in hitting percentage (.251) and third in the MW in kills per set (13.00).

Collins-Parker said Hamrick’s growth spans beyond her to the entire team.

“The whole attitude of our team this year is going in and believing they can get it done, executing, they work hard every single day in practice and they just want to learn,” she said. “It is so fun to coach people who want to learn and they have that attitude, they ask all the time, they are trying to get better, they are watching video.”

As a full 12 months has passed, Collins-Parker said she has seen Hamrick as one of the most improved players.

“All of them have made a turnaround but (it is) probably the most noticeable in her, but she is coming into the gym as a confident person,” she said.

Hamrick and the Aztecs begin conference play at 6 p.m. on Sept. 26 against San José State (5-6) at Peterson Gym.