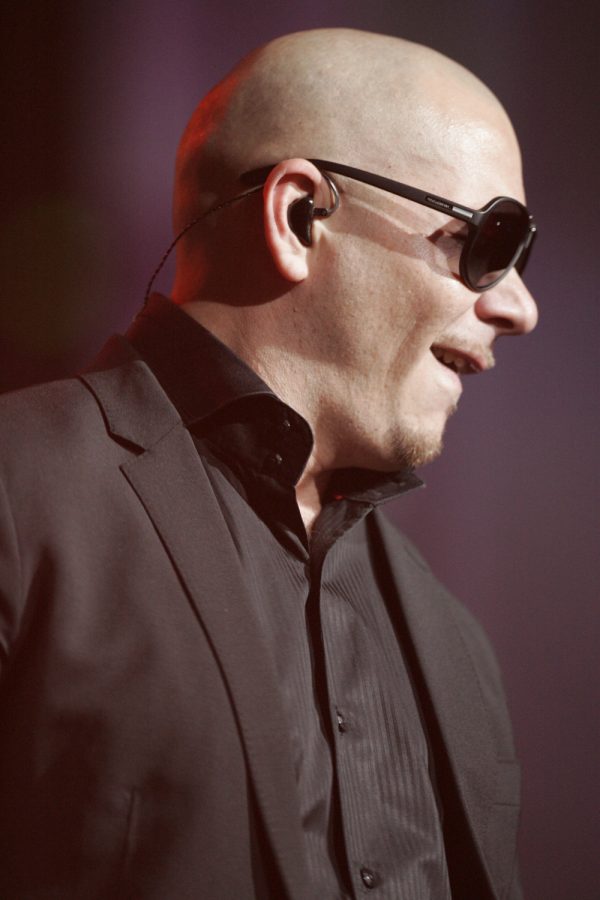 Pitbull at a concert.

Award-winning music artist Pitbull returns to the scene with his newest album, “Libertad 548″ which was released on Sept. 26. The album marks his 11th studio album featuring a global cast of artists such as Blake Shelton, Daddy Yankee and Ne-Yo.

Pitbull, a.k.a. Mr. Worldwide, said in a tweet that the album title was inspired by his father, who assisted Cuban refugees in immigrating to the U.S. during the Mariel Boatlift of the 1980.

“Libertad 548″ represents the amount of people my father, Armando Sr., led to freedom in the 1980 Mariel Boatlift,” Pitbull said. “The cover is a photo of him at this time; I was born months later. The best gift he & my mother ever gave me was freedom.”

With such an eclectic feature list, Pitbull successfully created a sound that can reach audiences all over the globe with this project.

In the second track, “No Lo Trates,” he enlists the help of global reggaeton phenomenon, Daddy Yankee, and successfully created a bouncy club banger. The track also features reggaeton artist Natti Natasha who sang a hypnotic hook. The production in this song brings an infectious energy and catchy tune that would play perfectly in the club.

Another standout track of the album, “Me Quedaré Contigo,” features R&B icon Ne-Yo and reggaeton artists Lenier and El Micha. Ne-yo starts the track serenading to his lover over guitar strings, “If I get to choose who I’m going to give this good life to / Who I’m gon’ ride with win or lose / No hesitation, I choose you.”

This marks the first time Ne-Yo sings in Spanish in this second collaboration between the two artists. The first time Pitbull and Ne-Yo collaborated on a track was the club banger, “Give Me Everything” released in 2011.

Finally, the song “Tell Me Again” was a nice surprise with its features of reggaeton artist Prince Royce and rapper-turned-actor Ludacris. The instrumental includes a sped-up sample of the popular 2004 hit song,“Lovers and Friends,” by R&B singer Usher that also featured Ludacris. This reggaeton rendition of the classic R&B club hit from the early 2000s is a great addition to the album.

Prince Royce starts the song off with a refrain from the classic song, “Tell me again (tell me again) / That we’ll be lovers and friends.” This is a nice nod to Ludacris’ ability and talent to make club hits.

Pitbull’s flow in this song was smoother than ever and Ludacris came through in his verse as well letting the listeners know that his pen is still as sharp as before, “Listen / I’m back and I’m better / They want me more than ever / I told them I came to save the day.”

Overall, this project flexes Pitbull’s hit-making talent and demonstrates his ability to continuously churn out club bangers. Featuring a strong cast of music artists from a wide array of genres, Pitbull’s ability to successfully collaborate with them truly shows his fans that he is Mr. Worldwide.